Rep. Ilhan Omar Married Guy She Denied Having Affair With 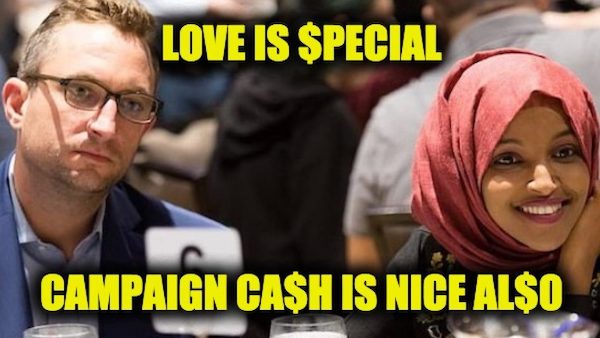 Love is a many splendid thing, it also can be profitable. Ilhan Omar married the guy she denied she was having an affair with Tim Mynett. The happy groom is a partner in the political consulting firm she uses, the E Street Group. Back in August, we reported that Rep. Omar was having an affair with the partner at E Street Group, which bills itself as providing national progressive strategies for candidates. Omar’s reelection campaign is paying E Street big bucks to help with her reelection.

The relationship was first “outed” by Mr. Mynett’s wife at the time. Dr. Beth Mynett filed divorce papers claiming her cheating spouse, Tim Mynett, told her in April that he was having an affair with Rep. Ilhan Omar.  The ex-Mrs. Mynett blamed affair as the reason for her filing for divorce.  The divorce papers read in part, “The parties physically separated on or about April 7, 2019, when Defendant told Plaintiff that he was romantically involved with and in love with another woman, Ilhan Omar.”

It is not known whether Mr. Mynett and Rep. Omar were siblings. 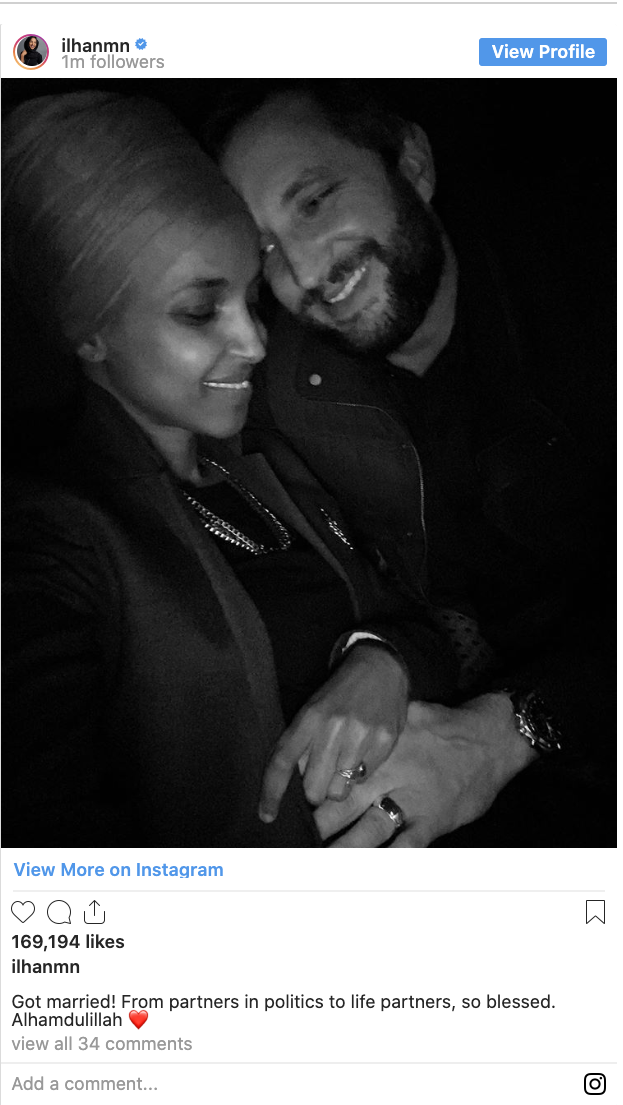 Both the new bride and groom denied Beth Mynett’s claim of extra-marital sex when outed. But the marriage certainly throws a monkey wrench into those denials.

Interestingly In an interview last year, Omar suggested that people should be ‘more fearful of white men’ than jihadists. I suspect her new husband is one white guy she’s not afraid of.

In Rep Omar’s faith, it is taboo for a Muslim woman to marry a man who isn’t Muslim.  I wonder how this relationship is going to sit with the Muslim community during her reelection campaign. Additionally, Islam has the same Ten Commandments as Jews and Christians, including the one about adultery:

Allah said “Do not approach unlawful sexual intercourse. Verily, it is immoral and an evil way.” Surah al-Isra 17:32 Abu Huraira reported: The Messenger of Allah, peace, and blessings be upon him, said: The adulterer is not a believer while he is committing adultery. Ṣaḥīḥ al-Bukhārī 2343.

Rep. Omar’s campaign has been investing in “community property.” Per Open Secrets, her reelection campaign has paid her new husband’s consulting firm over $523K through February 21, 2020, for the 2020 election cycle

Gee, I wonder if that is considered a dowry?