Ilhan Omar: We Have to ‘Dismantle the Whole System,’ Not Just Fix Criminal Justice System 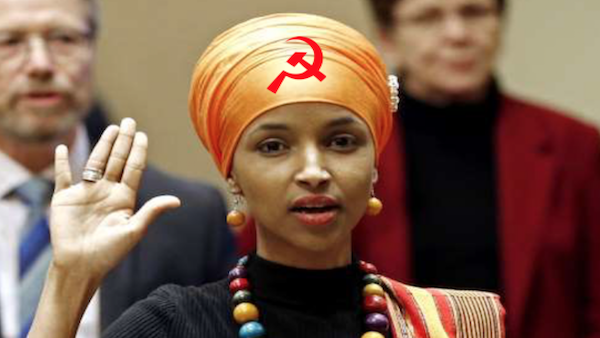 While addressing so-called “systemic racism” at a news conference with Minnesota leaders on Tuesday, Ilhan Omar, the anti-Semitic, America-hating, terrorist-loving Minnesota Democrat advocated dismantling what she called systems of oppression, including America’s “economy and political systems.”

“Right now in Congress, the Senate is sitting on a comprehensive bill to transform criminal justice and the policing system. All along with the Congressional Black Caucus, I helped led the George Floyd Justice in Policing Act. And because of Mitch McConnell and Donald Trump, it is being ignored. I guess the president would rather attack the people who are protesting than actually address the issues people are out here protesting for,” she said.

“The mortality rate for black Minnesotans to COVID is twice as high as it is with other races. And for me, this is very personal because I lost my own father to the coronavirus. I see the pain and the havoc it is wreaking on the black community in Minneapolis,” she told those assembled.

“We must recognize that these systems of oppression are linked. As long as our economy and political systems prioritize profit without considering who is profiting, who is being shut out, we will perpetuate this inequity. So we cannot stop at the criminal justice system. We must begin the work of dismantling the whole system of oppression wherever we find it,” Omar continued.

Here’s her statement as posted to Twitter by the Daily Caller:

Rep. Ilhan Omar calls for "dismantling" of the U.S. "economy and political systems," which she calls a "system of oppression." pic.twitter.com/AP072GsmzW

Response to her message was pretty much what you’d expect:

Cool. We should start with freshmen congresspeople and work our way from there, @IlhanMN

That would be nice, wouldn’t it?

How about, HELL NO!

One person nailed it on the head:

This is the Democrat party today. Dismantle America.

They will not stop with dismantle police.

They will not stop with dismantle USA heritage.

This is what Fundamentally Transform America means.

Bingo!  What was it Joe Biden tweeted not too long ago?  Oh, yeah:  “We’re going to beat Donald Trump. And when we do, we won’t just rebuild this nation — we’ll transform it.”

We're going to beat Donald Trump. And when we do, we won't just rebuild this nation — we'll transform it.

I don’t think so.

This election is no longer about pitting Republicans versus Democrats.  This is about protecting America from the Democrat Party, which seems to have declared war on the United States.  Folks, when people like Ilhan Omar tell you what they want to do to America and to you, you’d better believe them…

Be sure to catch up on all of our coverage of Ilhan Omar, HERE.

Below is her entire 42-minute speech.

Reminder: If you haven’t done so yet, please go HERE and cast your vote for the Liberal Media Propagandist Of The Year for 2020.