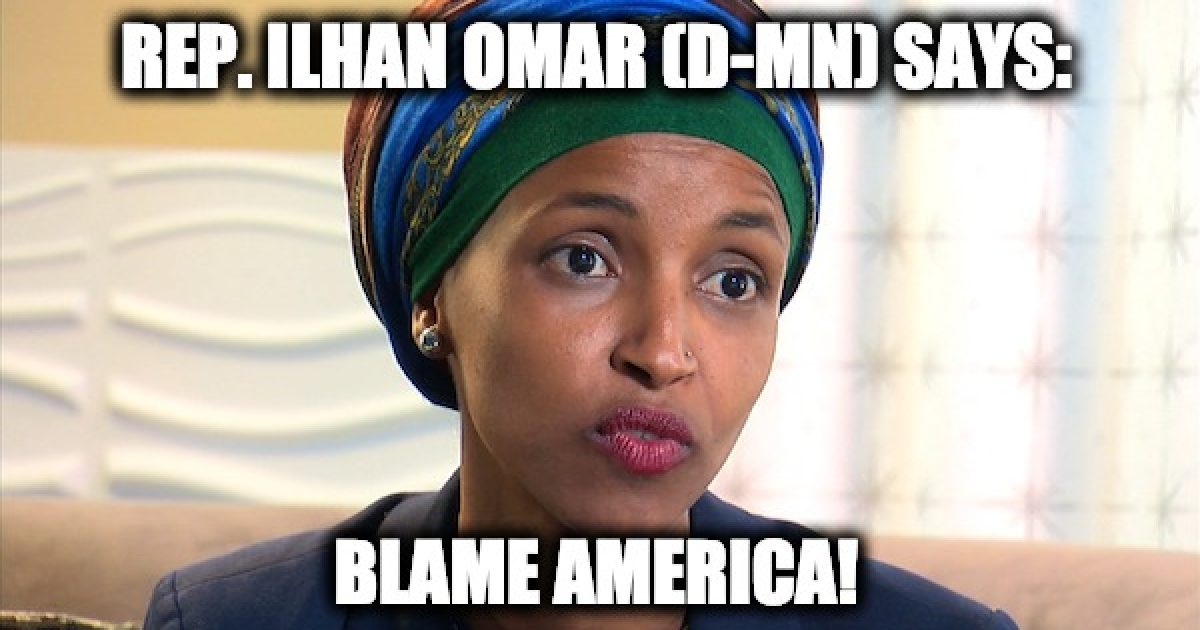 It seems that Rep. Ilhan Omar (D-MN)., has had a soft spot in her heart for terrorists for several years.  On Monday, Fox News reported that the freshman Democrat congresswoman once blamed the United States for a brutal al-Shabab terror attack on a Kenyan shopping mall in 2013.

According to Omar, the attack that saw nearly 70 killed and 200 others wounded was a reaction to what she called “our involvement in other people’s affairs.”

“When are we gonna decide or realize that terrorism is a reaction? It’s an ideology, it’s a means of things, it’s not an entity, it’s not a place, people. It’s a reaction to a situation,” host Ahmed Tharwat asked then-activist Omar, on the show “Belahdan” on Twin Cities PBS during a discussion about the experience of the Somali community in the U.S. following the attack in Kenya.

“Usually most people want to not look internal and see what their actions that makes another react. For us, it’s always ‘I must have not done anything. Why is it happening to me?’ Nobody wants to take accountability of how these are byproducts of the actions of our involvement in other people’s affairs,” Omar added.

Really? At the time Omar was talking about Kenya, but is she saying America deserved 9/11? The attack on the USS Cole? The Orlando Disco? Rep, Omar is someone who understands terrorism so well, Nancy Pelosi put her on the House Committee on Foreign Affairs. I suppose the House Democratic Caucus agrees with Ms. Omar or they wouldn’t have placed her on a  committee with oversight of America’s foreign policy.

As we and others recently reported, Omar sought “compassion” for nine men accused of wanting to join the terror group ISIS in 2016.

“We’ve heard variations of this argument for decades now. We hear it on 9/11, we heard it when suicide bombs go off on train stations in London or Madrid,” said The Heritage Foundation’s Robin Simcox.  “The problem the people who make that argument have is that you can’t possibly logically explain then why attacks take place in, for example, Cameroon or the Philippines, or Thailand, or China.”

“This isn’t something dictated by facts or logic, it’s something that is an ideological position that Omar is obviously determined to take regardless of the facts,” Simcox added.

Fox said it’s not clear if Omar still stands behind her 2013 comments and her office did not respond to multiple requests for comments.