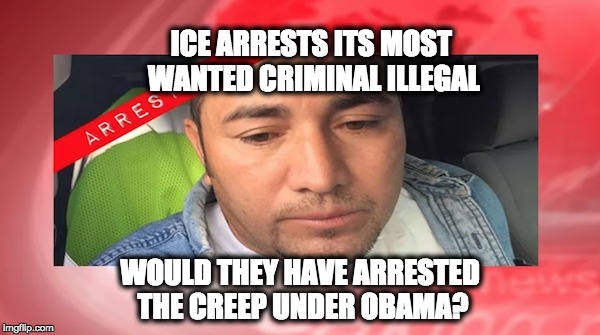 A  public tip helped officials capture Jose Victor Bonilla-Melendez, who was on ICE’s ‘Most Wanted’ list. He is a convicted sex offender, as well as his brother, who is a convicted child sex offender and has been previously deported. One question brought up by the arrest is, “Would this have happened when Barak Obama was president? Based on his eight years as president–I doubt it.

Melendez was located after ICE received a tip about his whereabouts. The tipper saw his photo posted by the local Denver ABC Facebook page, as being one of ICE’s most wanted fugitives.

This all happened Friday morning in Aurora, Colorado.

Bonilla-Melendez has a criminal history that includes felony convictions for assault causing serious bodily injury, sexual assault, and unlawful re-entry of a deported alien. He has been removed from the U.S. on two prior occasions, most recently on April 5, 2006. On Dec. 7, 2014, the Aurora Police Department arrested him on local charges, but the subject posted bond before an ICE detainer could be placed. Despite numerous attempts by ICE to locate his whereabouts, he remained at-large.

“Protecting public safety by identifying and removing dangerous criminal fugitives from our communities is the top priority of our fugitive operations teams,” said Jeffrey Lynch, field office director for ERO Denver. “A convicted felon and one of our most wanted fugitives, Bonilla-Melendez is a threat no more and is in custody awaiting removal from the United States. I commend the hard work and dedication of our officers.”

During Bonilla-Melendez’s arrest, ERO officers also encountered another individual who they arrested – Bonilla-Melendez’s brother, German Bonilla, who was convicted of sexual assault against a child and unlawful re-entry after deportation following conviction for an aggravated felony. German has also been removed from the U.S. twice previously.

“The unanticipated encounter of Jose Bonilla-Melendez’s brother, German Bonilla — another criminal alien — demonstrates the dangerous nature of our Fugitive Operations Teams,” said Lynch. “Our ICE officers must stay vigilant to the unexpected.”

Here’s something you may not realize. During the Obama presidency, the number of criminal illegals deported decreased every year.

Wait you are thinking. How can that be? Barack Obama deported more illegals than any other president–they called him the deporter-in-chief. And since he concentrated on criminal illegals, that number must be huge.  Sadly both statements are wrong.

In fact, over the course of the eight years of the Obama presidency, ICE has averaged fewer deportations per year, than any administration since Nixon’s. 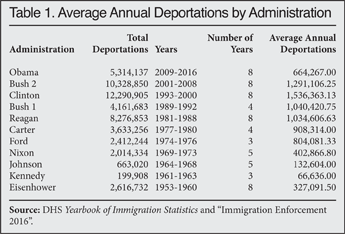 Now that we’ve fixed that lie, let’s get to the Criminal Illegals.

Nearly all (98 percent) of the aliens removed from the interior in 2016 were convicted criminals. That’s percentage –the actual number of criminals removed had declined throughout most of the Obama presidency. In 2016, ICE removed 60,318 criminal aliens from the interior. This is a decline of 4 percent from 2015 and a decline of 60 percent from the peak in interior criminal alien removals in 2010. 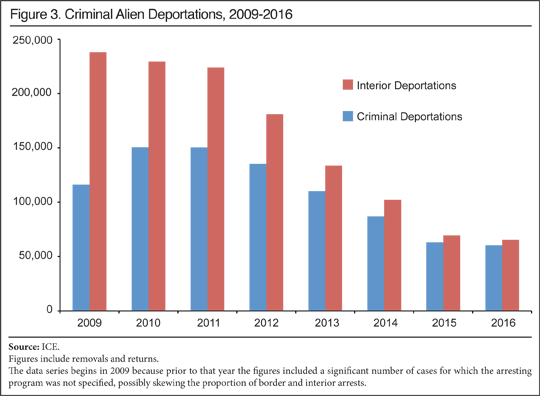 The main reason for the decline is the Obama administration’s definition of criminal aliens changed throughout his presidency narrowing the types of cases that ICE officers are permitted to pursue. Those policies exempted all but the most egregious alien offenders from deportation (and some of the egregious offenders got off also). Under Obama only aliens convicted of felonies, significant misdemeanors, or three lesser misdemeanors were considered priorities, and exceptions were allowed in many cases, such as if the alien had acquired a family or other community ties here.

How has that changed under President Trump? On Easter Sunday’s Meet The Press DHS Director John Kelly told Chuck Todd that ICE has expanded the crimes that will lead ICE to tracking and deporting a criminal alien.

So back to the original question. Would scumbags like Jose Victor Bonilla-Melendez, and his child-molesting brother have been deported during an Obama Administration? Perhaps the best answer to that question is–it didn’t happen till Trump was POTUS