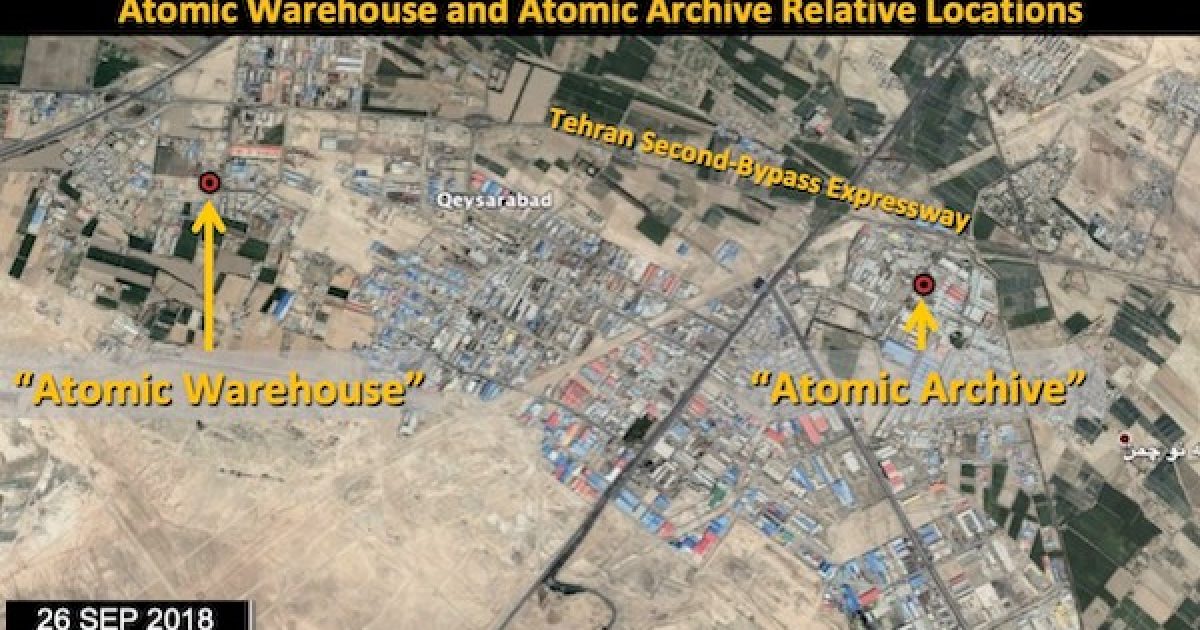 IAEA inspectors found evidence of radioactive activity in the Tehran warehouse identified by Israel Prime Minister Netanyahu during his annual U.N. speech this past September, in which he claimed that Iran stored equipment and materials related to its military nuclear program, according to senior Israeli officials involved in the matter.’

This is a major violation of the JCPOA. 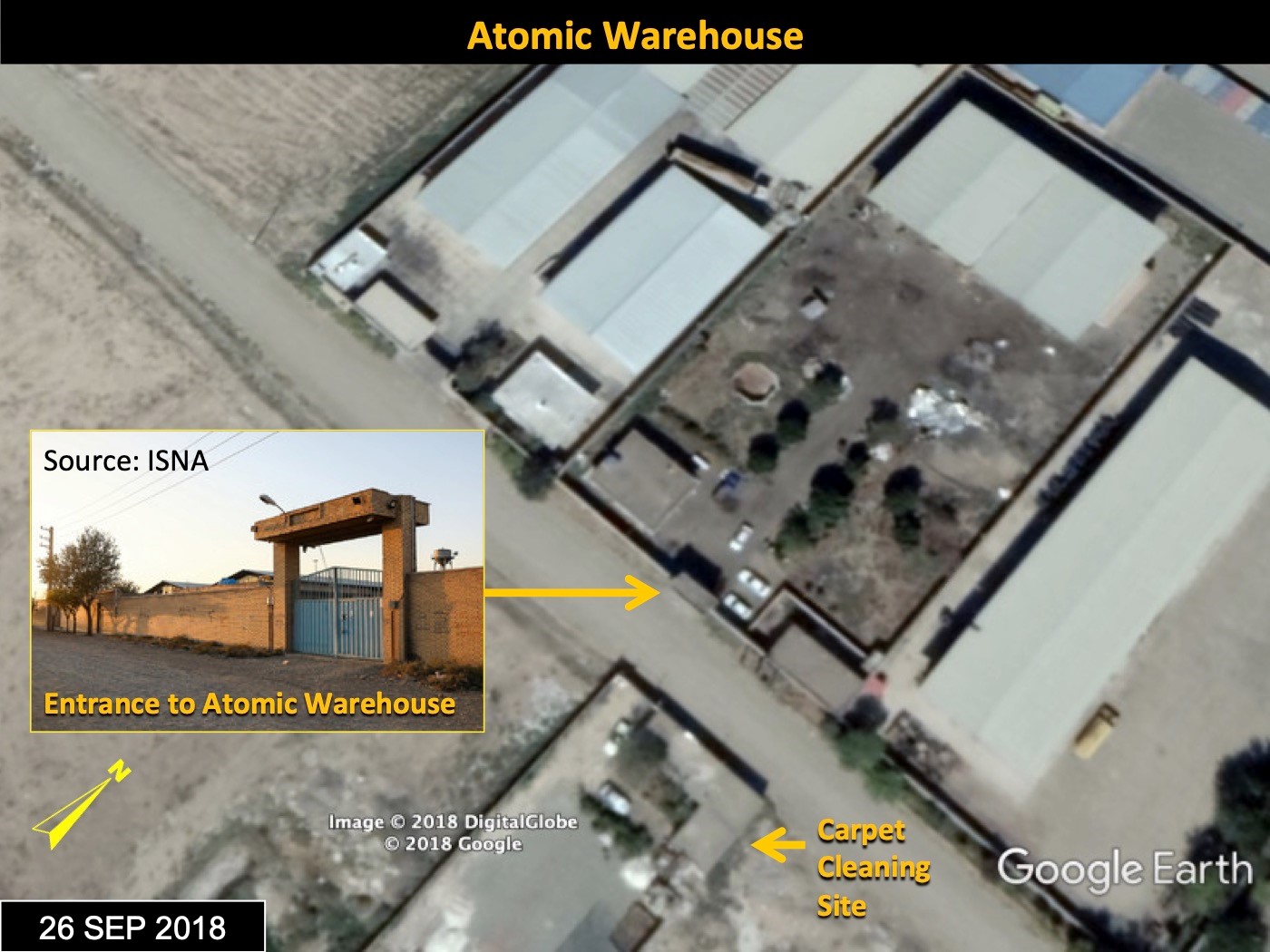 Image of the Turkuz Abad atomic warehouse in Tehran on September 26, 2018, with an inset from the Iranian News Agency showing a ground view of the entrance.

In his speech at the UN, Netanyahu claimed that in August 2018, the Iranians cleared from the atomic storage facility 15 kg of enriched uranium they had kept secret from the IAEA, and they had another 300 tons of nuclear-related equipment and material. The Iranians then denied the allegations and claimed that the factory was a carpet factory and denied that any nuclear activity was happening at the site. The truth is that the carpet business is across the street from the warehouse.

According to Israel’s Channel 13 which broke the story

Israel gave the International Atomic Energy Agency (IAEA) information about the suspected warehouse, and UN inspectors visited the site several times, in March, taking samples of soil at the site to discover traces of radioactive materials and preparing a report on their findings.

According to senior Israeli officials, inspections by UN inspectors have been found to be positive, and in the last few weeks it has been confirmed, and senior officials have noted that there has been considerable evidence of radioactive contamination, indicating that nuclear materials not reported by Iran have been

Yesterday (Wednesday) Prime Minister Netanyahu spoke with President Donald Trump regarding the Iranian issue for the second time in a week, the IAEA discovery was probably the major topic. 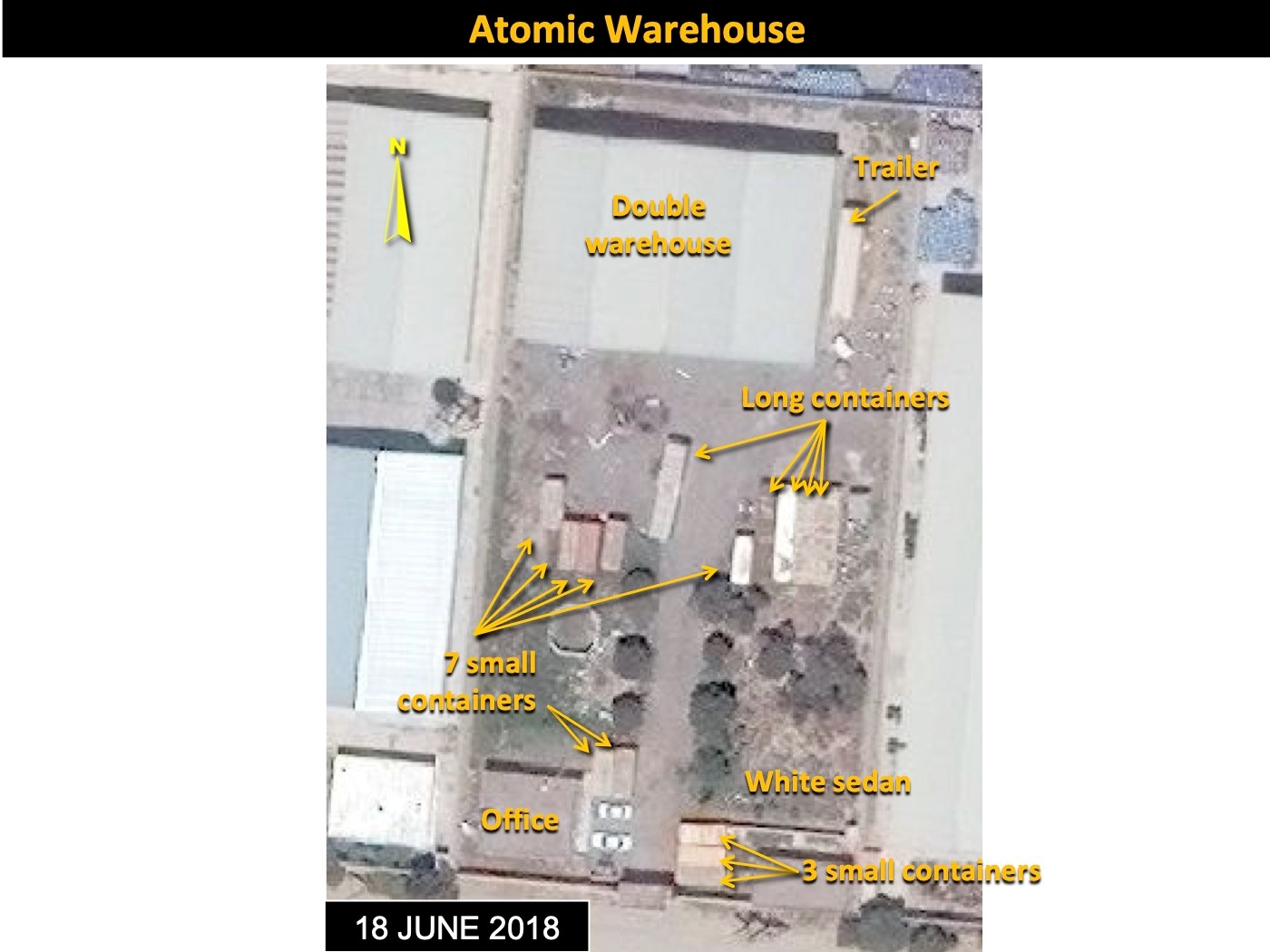 June 18, 2018 image obtained by the Institute showing presence of all containers in the May image.

Back in April,  Reuters reported that the IAEA inspected the warehouse site more than once in a month— an indication that something was up:

Netanyahu argued the warehouse showed Tehran still sought to obtain nuclear weapons, despite its 2015 pact with world powers to curb its nuclear program in return for a loosening of sanctions.

At the time the IAEA bristled at being told what to do, saying it does not take information presented to it at face value and sends inspectors “only when needed”.

“They’ve visited the site,” one of the three diplomats said, speaking on condition of anonymity because they were not authorized to discuss the issue publicly and details of inspections are confidential.

One of the diplomats said the IAEA had been to the site more than once last month. The others said the agency had been there, without specifying when. The IAEA declined to comment.

“We have nothing to hide and any access given to the IAEA so far has been in the framework of laws and regulations and nothing beyond that,” an Iranian official said.

This is just more proof that President Trump did the right thing by pulling out of the JCPOA.

If it weren’t for Israel and the Mossad, the world wouldn’t have known about this dangerous development, and if it weren’t for Netanyahu taking the revelation public (see the relevant part of his speech below), the IAEA would probably have ignored the evidence.

This is a developing story and look for updates here at The Lid.

Speaking to the UN General Assembly on September 27, 2018, Netanyahu said in part:

What I’m about to say has not been shared publically before.

Today, I am disclosing for the first time that Iran has another secret facility in Tehran—a secret atomic warehouse for storing massive amounts of equipment and materiel from Iran’s secret nuclear weapons program.

Let me show you exactly what the secret atomic warehouse looks like.

Here it is. You see, like the atomic archive, it’s another innocent looking compound. Now for those of you at home using Google Earth, this no-longer-secret atomic warehouse is on Maher Alley, Maher Street. You have the coordinates, you can try to get there. And for those of you who try to get there, it’s 100 meters from the Kalishoi, the rug cleaning operation. By the way, I hear they do a fantastic job cleaning rugs there. But by now they may be radioactive rugs.

This is the second secret site.

Now, countries with satellite capabilities may notice some increased activity on Maher Alley in the days and weeks ahead. The people they’ll see scurrying back and forth are Iranian officials desperately trying to finish the job of cleaning up that site. Because you see, since we raided the atomic archive, they’ve been busy cleaning out the atomic warehouse.

Just last month, they removed 15 kilograms of radioactive material. You know what they did with it? They had 15 kilograms of radioactive material, they had to get it out of the site, so they took it out and they spread it around Tehran in an effort to hide the evidence. The endangered residents of Tehran may want to know that they can get a Geiger counter on Amazon for only $29.99. As of today that’s just 4 million Iranian rials, but we’ll get to that later. I’ll talk about the Iranian economy in a minute. They took this radioactive material and spread it around Tehran.

Now, the Iranian officials cleaning out that site still have a lot of work to do because they’ve had at least, at least 15 ship containers, they’re gigantic, 15 ship containers full of nuclear related equipment and material stored there. Now, since each of those containers can hold 20 tons of material, this means that this site contains as much as 300 tons, 300 tons of nuclear related equipment and material.

Well, Mr. Amano, do the right thing. Go inspect this atomic warehouse, immediately, before the Iranians finish clearing it out.

And Mr. Amano, while you’re at it, inspect the other secret sites we told you about. Once and for all, tell the world the truth about Iran.