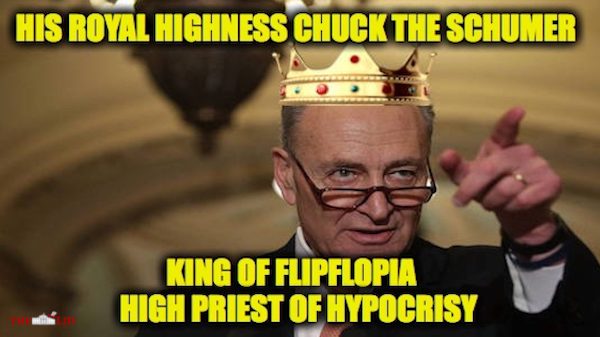 One of the unfortunate things about living in New York State is the burden of having Chuck Schumer as our US Senator. The man doesn’t give a rat’s arse about NY State, or the United States. All he cares about is advancing the needs of his party. The latest example of his party-first attitude is the Democrats’ sham impeachment of Donald Trump. Sen. Schumer impeachment

“In response to the House’s action, as you have noted, our rules require the Senate to conduct a trial to consider and vote on the Articles of Impeachment. This is an enormously weighty and solemn responsibility that was assigned to the Senate by the Framers of the Constitution. Senate Democrats believe strongly, and I trust Senate Republicans agree, that this trial must be one that is fair, that considers all of the relevant facts, and that exercises the Senate’s ‘sole Power of Impeachment’ under the Constitution with integrity and dignity. The trial must be one that not only hears all of the evidence and adjudicates the case fairly; it must also pass the fairness test with the American people. That is the great challenge for the Senate in the coming weeks.” (Sen. Schumer, Letter To Sen. McConnell, 12/15/2019)

But as you can see in the short video below. In  December 1998, between Bill Clinton being impeached and a Senate trial, he told a reporter, “Well, I hope a trial doesn’t go forward. And I am starting from this moment on to explore every possible way to avoid a trial.”

And the hypocritical Senator from NY followed through trying to stop a long trial a month later, with votes to dismiss the case. When that failed he fought against calling witnesses:

Back to Present Day:

Conducting the trial according to this plan will also allow the public to have confidence in the process and will demonstrate that the Senate can put aside partisan concerns and fulfill its constitutional duty.  I look forward to discussing this plan with you and to working with you to ensure that the Senate can rise to this critically important occasion.” (Sen. Schumer, Letter To Sen. McConnell, 12/15/2019)

But he didn’t put aside partisanship for the Clinton trial:

That’s our Chuck. Everything he said about impeachment when Bubba Clinton was about to be put on trial, gets thrown into the toilet when his party pushes through a farcical impeachment of President Trump. That’s because Schumer’s attitude is party before country. And America is worse off for it.

Note: All of the bullet points below the video are from the Senate Republican Communications Center