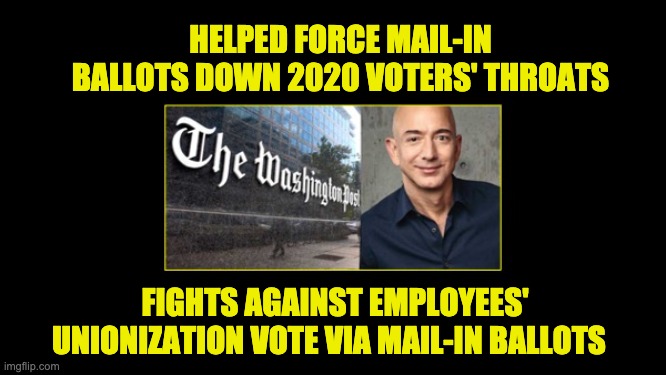 Yo Jeff! How many times has the Washington Post, your very own news rag, blasted anyone who dared question mail-in voting? Now that it impacts YOUR bottom line, why do you suddenly object to mail-in ballots? And don’t you dare complain about the possibility of those votes being subverted or otherwise tainted. Not after the role your broadsheet played in making sure that 2020’s Democracy Died in Darkness, and whatever the opposite of transparency is. Hypocritical Jeff Bezos.

Amazon, Inc., run by Jeff Bezos, who also owns The Washington Post, filed a petition with the National Labor Relations Board opposing an effort by employees at a warehouse in Alabama to hold a union election using mail-in ballots.

It gets better. The reasons stated for the company’s opposition to the mail-in election were “concerns about election security run particularly high” due to the use of “an unreliable electronic signature platform.”

Everyone knows where the Washington Post stands on mail-in ballots, especially about their security and signature matching. But Amazon — also a Bezos-owned company — doesn’t appear to share the Post’s confidence in the integrity of a mail-in election. –

Isn’t that precious? Hey Bezos, be careful about what claims you make about the validity of this union vote.

You just might find that your social media accounts suddenly go dark. If even a sitting President isn’t protected, you’re only as safe as the other tech guys decide you are.

The only thing that would make this scenario more ironic would be if Twitter and Facebook promoted the pro-union voices and throttled the anti-union voices — with, say, a tidy sum of money directly invested by Zuckerberg to the union backers in their Get Out The Vote efforts.

They might even help AOC get directly involved in appealing to their workers.

After all, it was perfectly legit for a few activist billionaire power-brokers to run roughshod over the natural inclinations of last November’s voting public, to elevate their own hand-picked candidates to push forward agendas those same billionaires wanted.

Why would it be a bad thing if other activist groups hijacked the inner political workings of Amazon in exactly the same way that WaPo cheered the US elections being hijacked by tech billionaires, media moguls, and coastal donors pumping money into a state left coast socialists only cared about because those 2 seats could secure them a Senate majority?

Why not make Amazon play by the same rules that Bezos and his propaganda pamphlet helped to force down our throats?

If Bezos is looking for sympathy, he’s come to the wrong place.