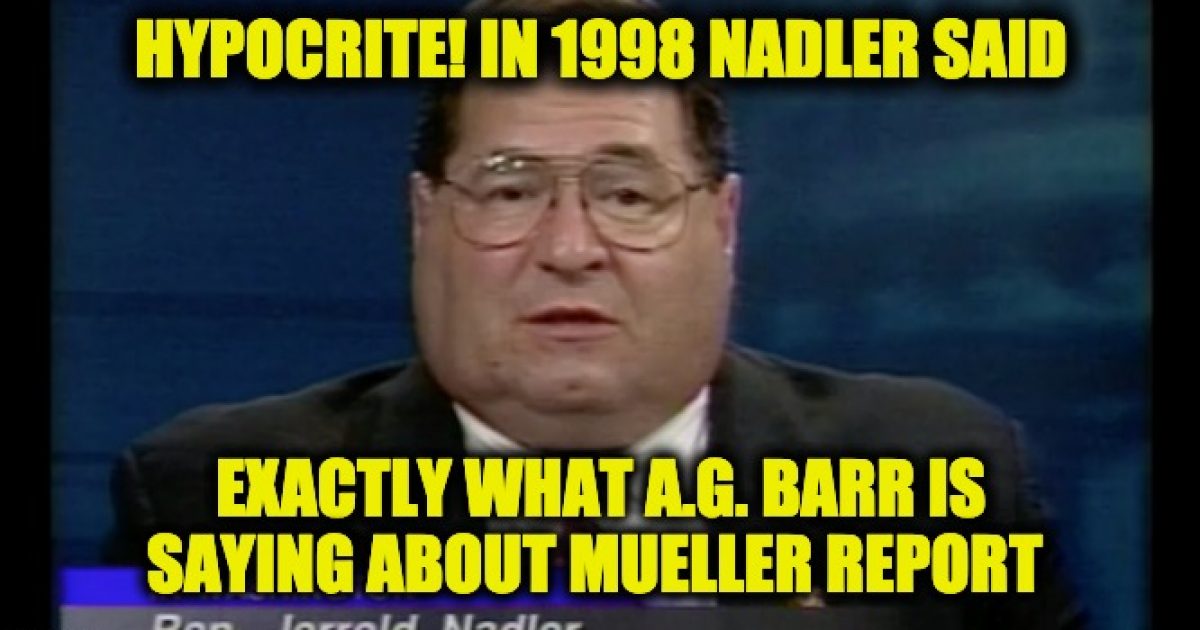 Twenty-one years ago Jerrold Nadler was on the house judiciary committee when Ken Starr turned over his report on then-President Bill Clinton.  Back then he didn’t want anything released before it was redacted for grand jury testimony and information that would hurt people who weren’t charged. Oh, and he said it would take some time to do that.  In other words, he said the opposite of what he is saying today and an awful like what AG Barr is saying.

Under the old special prosecutor’s law, the report was turned over to Congress, now it is turned over the Justice Department. On Sept. 9, 1998, Ken Starr delivered his report to Congress, and later that day Nadler went on the Charlie Rose show (video below) to fight against the GOP’s demands that the full report go public (video at the end of post)

Nadler gave reasons why the full report must be kept secret:

Mr. Starr in his transmittal letter to the speaker and the minority leader made it clear that much of this material is Federal Rule 6(e) material, that is material that by law unless contravened by a vote of the House, must be kept secret. It’s grand jury material. It represents statements which may or may not be true by various witnesses, salacious material, all kinds of material that it would be unfair to release. So, I assume what’s going to have to happen before anything else happens is that somebody — the staff of the Judiciary Committee, perhaps the chairman and ranking minority member — is going to have to go over this material, at least the 400 or 500 pages in the report to determine what is fit for release and what is, as a matter of decency and protecting people’s privacy rights, people who may be totally innocent third parties, what must not be released at all.

And later on, he said

For anyone to go through the report and the documents and to understand them and to start making judgments as to what’s in there is gonna take weeks.

That doesn’t sound like the Jerrold Nadler today.  Maybe when he had his stomach stapled, he had his judgment stapled also.

He told the NY Times that obstruction of justice was NOT an impeachable offense:

Mr. Nadler said he was not convinced that Mr. Clinton committed perjury or obstructed justice, but that even if the President did, the offenses would not be impeachable.

”An impeachable offense is an abuse of Presidential power designed to or with the effect of undermining the structure or function of government, or undermining constitutional liberties,” he told several hundred people at the recent town hall meeting at the Fashion Institute of Technology.

Nadler was one of the chief opponents of Ken Starr’s report and the push for Bubba Clinton’s impeachment. As pointed  by Terry Jeffrey in a Town Hall column, Nadler’s objections included:

This partisan coup d’etat will go down in infamy in the history of our nation,” the congressmen said.

“Mr. Speaker,” he said, “this is clearly a partisan railroad job.”

“We are losing sight of the distinction between sins, which ought to be between a person and his family and his God, and crimes which are the concern of the state and of society as a whole,” he said.

“Are we going to have a new test if someone wants to run for office: Are you now or have you ever been an adulterer?” he said.

So why did Jerrold Nadler say one thing twenty-one years ago and another today?  Could it be that Bubba Clinton is a Democrat and Donald Trump a Republican? That’s part of it.

But also consider that that according to Bill Barr’s memo on Mueller’s conclusions, the two years the Democrats spent trying to overturn the 2016 election turns out to a nothing burger with extra cheese. They want to comb through the unredacted report and the millions of backup pages to find every iota of evidence whether true or not they can use to embarrass this president, administration, and or family. I wouldn’t be surprised to see a leak to the Washington Post or NY Times complaining about the brand of coffee in the Trump Campaign headquarters.

In December 1998 while making his argument against impeaching Clinton, Nadler argued on the House floor saying. “There are clearly some members of the Republican majority who have never accepted the results of the 1992 or 1996 elections,”  That same statement could be made about Nadler and his Democratic Party colleagues today.

The video of Nadler on Charlie Rose follows: