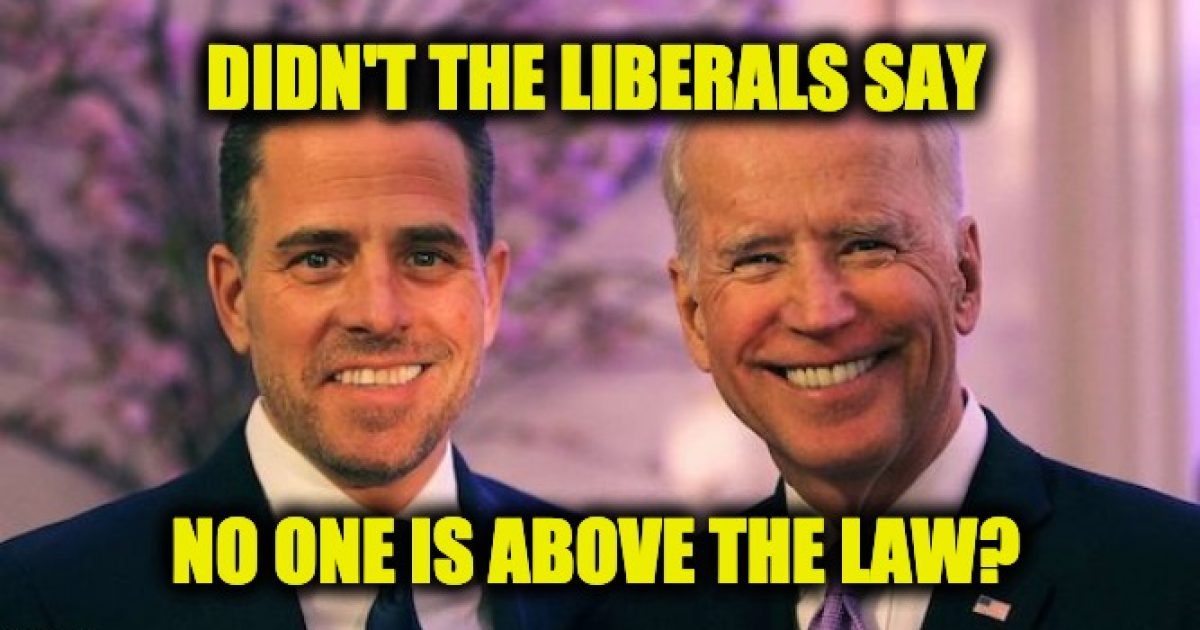 The liberals are going nuts because of the claim President Trump asked the Ukrainian President to investigate Hunter Biden for corruption that occurred when he was on the board of the Ukrainian natural gas company, Burisma Holdings. The liberals are ignoring many things including that there is plenty of evidence suggesting that there is probable cause for Hunter Biden to be investigated by Ukraine and that his father Joe may have used his position as Vice President to protect his son.

They are also failing to acknowledge the supposed whistleblower had no direct knowledge of the call between Trump and the Ukranian. Ukrainian Foreign Minister Vadym Prystaiko who does have direct knowledge denied reports that President Trump pressured Ukrainian leader Volodymyr Zelensky, “I know what the conversation was about, and I think there was no pressure. This conversation was long, friendly, and it touched on many questions, sometimes requiring serious answers.”  And the investigation began before Zelensky was elected on April 21, 2019 (John Solomon wrote about the investigation being started a month earlier), so if anything President Trump was urging Volodymyr Zelensky to keep the investigation going.

A senior member of Ukraine’s Prosecutor General’s International Legal Cooperation Dept. told John Solomon five months ago, that since last year, he’s been blocked from getting visas for himself and a team to go to the U.S. to deliver evidence of Democratic party wrongdoing during the 2016 election, and Hunter Biden corruption to the DOJ.  The senior prosecutor Kostiantyn Kulyk never got an answer, and he says it’s because the visas were blocked by the U.S. Ambassador. The Ambassador, Marie L. Yovanovitch is a career diplomat (since 1986)  was appointed to her present position in August 2016 by former President Obama and removed by Secretary of State Mike Pompeo. The attempt to make the Ukrainian Govt. happy and accept the evidence is the reason Guiliani got involved a month ago per John Solomon.

Here’s the evidence we do have.  Ukrainian Prosecutor Kostiantyn Kulyk explained they were prevented from providing evidence about Hunter Biden and the Democratic Party working with Ukraine to interfere with the 2016 US presidential election.

Ukrainian authorities gathered evidence that money paid to an American Democrat allegedly was hidden by Ukraine’s National Anti-Corruption Bureau (NABU) during the 2016 election under pressure from U.S. officials. “In the course of this investigation, we found that there was a situation during which influence was exerted on the NABU, so that the name of (the American) would not be mentioned,” he said.

One can find more information on the Joe Biden/Hunter Biden Scandal Guliani should bring a copy of Peter Schweizer’s book “Secret Empires: How the American Political Class Hides Corruption and Enriches Family and Friends.” The Hunter Biden story is one of the examples of the political class enriching family that Schweizer explains in the book.

Schweizer gave a shortened version of the Hunter Biden story to Breitbart.com:

“The bottom line is Joe Biden was the Obama administration’s point-person on policy towards Ukraine,” noted Schweizer. “He steered $1.8 billion in aid to that government and while he was doing so, his son got a sweetheart deal with this energy company – that we’ve been able to trace over just a 14-month period – paid $3.1 million into an account where Hunter Biden was getting paid.”

Schweizer highlighted Hunter Biden’s lack of professional or experiential bona fides in terms of his board position at Burisma Holdings.

Schweizer went on, “It’s a huge problem, and it goes to this question of corruption and potential payoffs and bribes that these foreign entities were making to the Bidens in exchange for hopefully getting favorable treatment.”

Whether or not the actions of Joe Biden and his son Hunter crossed into illegality is yet to be seen but there is certainly enough evidence of probable cause proving they should be investigated by Ukraine. And if the President asked the new Ukrainian leader to continue the investigation, he is justified. After all, during the fake Russiagate investigation, we heard Democrats say hundreds of times, “no one is above the law” (well except for illegal aliens). And as for the MSM that may be attacking the President for his Ukrainian phone call in July, based on the way they’ve reported about the Trump administration since he was elected, if Joe and Hunter Biden’s last name was Trump,  the media would have been all over this story when Joe Biden bragged getting Ukraine to fire the prosecutor, and again two years ago when Peter Schweizer’s book was first published.