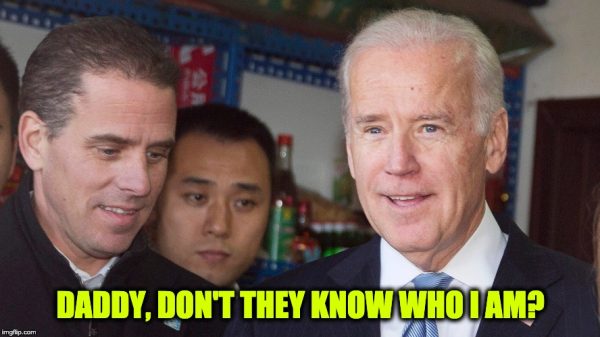 Hunter Biden might be able to run for a little while, given his famous father’s stature and his well-connected protectors in Washington DC. However, the end of the impeachment scam does not mean he is free and clear. Finance Committee Chairman Chuck Grassley (R-IA) and Homeland Security and Governmental Affairs Committee Chairman Ron Johnson  (R-WI)  have sent a letter to the Secret Service asking for Hunter Biden’s travel records when his father was the Vice President.

Senate Finance Committee Chairman Chuck Grassley (R-Iowa) and Senate Homeland Security and Governmental Affairs Committee Chairman Ron Johnson (R-Wis.) are seeking records of Hunter Biden’s travel while he was under U.S. Secret Service protection as they continue to investigate potential conflicts of interest to boost his business ventures in Ukraine and China.

In a letter today to the Secret Service, the chairmen requested information on the protection Hunter Biden received while his father, Joe Biden, was Vice President of the United States.  They also sought details on Hunter Biden’s travel dates and locations while receiving Secret Service protection.
The chairmen previously requested meeting records from the State Department, National Archives and Blue Star Strategies, a lobbying organization employed by Burisma Holdings, a Ukrainian energy company that employed Hunter Biden on its board while Joe Biden oversaw the Obama Administration’s Ukraine policy. Burisma was under investigation for corruption at the time. Grassley also previously raised concerns about the Obama administration’s approval of the sale of a U.S. company to the Chinese government and an investment firm formed, in part, by Hunter Biden

The earlier request was reported on this site in early November after another Burisma revelation from investigative reporter John Solomon. Solomon revealed emails between Burisma Holdings (the Ukrainian gas that employed Hunter Biden) and the Obama state department and others. The primary topic of which was getting the State department’s help stopping the Ukraine investigation of Burisma. Based on Solomon’s report, asked Foggy Bottom to turn over those and any related documents.

The Committee on Finance and Homeland Security and Governmental Affairs (“the committees”) are reviewing potential conflicts of interest posed by the business activities of Hunter Biden and his associates during the Obama administration, particularly with respect to his business activities in Ukraine and China.  In addition to several letters that the committees have sent to other agencies as part of that inquiry, The Committee on Finance also has written to the Department of Treasury regarding potential conflicts of interest in the Obama-era CFIUS-approved transaction which gave control of Henniges, an American maker of anti-vibration technologies with military applications, to a Chinese government-owned aviation company and China-based investment firm with established ties to the Chinese government.   That transaction included Rosemont Seneca Partners, a company formed in 2009 by Hunter Biden, Christopher Heinz, and others.

We write to request information about whether Hunter Biden used government-sponsored travel to help conduct private business, to include his work for Rosemont Seneca and related entities in China and Ukraine.  In December of 2013, one month after Rosemont Seneca’s joint venture with Bohai Capital to form BHR, Hunter Biden reportedly flew aboard Air Force Two with then-Vice President Biden to China While in China, he helped arrange for Jonathan Li, CEO of Bohai Capital, to “shake hands” with Vice President Biden. Afterward, Hunter Biden met with Li for reportedly a “social meeting.”   After the China trip, BHR’s business license was approved.  Then, in 2015, BHR joined with Aviation Industry Corporation of China (AVIC) to acquire Henniges, which was the “biggest Chinese investment into US automotive manufacturing assets to date.”

In addition to business dealings in China, Hunter Biden also served as a board member for Burisma Holdings, a Ukrainian energy company.  In April 2014, around the time Hunter Biden joined Burisma, Vice President Biden reportedly became the “public face of the administration’s handling of Ukraine.”  It is unclear whether Hunter Biden received government sponsored travel or a protective detail for these endeavors.

Accordingly, to help the committees better understand Hunter Biden’s travel arrangements to conduct business related to his dealings in Ukraine and China, among other countries, while he received a protective detail, please provide the following information no later than February 19, 2020:

Please describe the protective detail that Hunter Biden received while his father was Vice President.

Please provide a list of all dates and locations of travel, international and domestic, for Hunter Biden while he received a protective detail.  In your response, please note whether his travel was on Air Force One or Two, or other government aircraft, as applicable and whether additional family members were present for each trip.

The letter was sent almost immediately after the Senate voted to acquit President Trump on Wednesday.
Facebook Twitter Flipboard