But Lyin Joe Biden Says He Knew Nothing 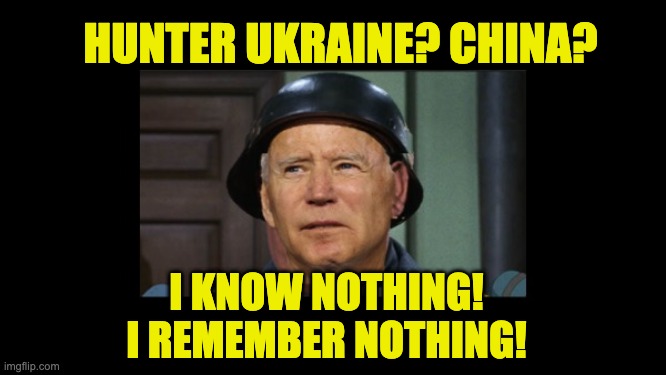 Over and over, Joe Biden says he knew nothing about his son Hunter’s scandalous business dealings. But we already have proof that he knew. If you don’t believe me—-ask Tony Bobulinski. Hunter Biden scandal

Bobulinsky was a partner of Hunter’s in the China deal and the CEO of his China company. Tony  also explained that Hunter’s father, Democratic Presidental candidate Joe Biden was involved and was an “eager participant in a family scheme to make millions of dollars by partnering with a shady Chinese Communist firm.”

For more evidence, read the report released by the Senate Homeland Security Committee told of “a vast web of corporate connections and financial transactions between and among the Biden family and Chinese nationals.”

Of course, the MSM and the Democrats ignore the truth; all they do is repeat Joe Biden’s response to the scandal, “I am proud of my son.” I bet that Al Capone’s father was proud of his son also.

Now there is additional proof, check out this scoop about Joe’s corrupt son, via Daily Wire:

In an email dated September 21, 2017, Hunter Biden wrote to Cecilia Browning, the general manager of an office building called “House of Sweden,” requesting that “keys” be “made available for new office mates.”

CEFC China Energy was a Chinese conglomerate that was among the largest energy companies in China before going out of business a couple of years ago. CNN notes that the company “aligned itself so closely with the Chinese government that it was often hard to distinguish between the two.”

Will the MSM turn on Joe and cover his numerous scandals? Not in our lifetime, they don’t report liberal Democratic scandals.