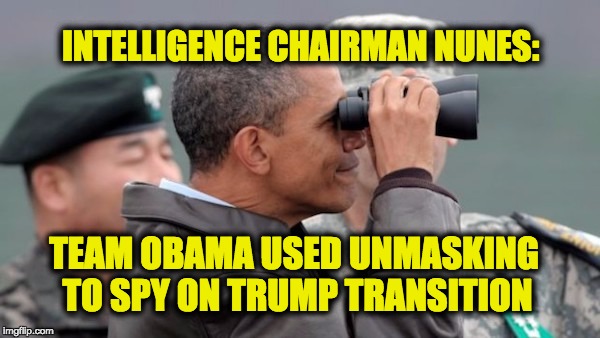 Rep. Devin Nunes (R-CA) charged three top members of former President Obama’s team of making hundreds of requests to unmask the names of Americans in intelligence reports. The requests were made during the election and transition period, and the names included members of the Trump Team. The three officials requesting the unmasking were Former CIA director John Brennan, former national security adviser Susan Rice, and former U.N. ambassador Samantha Power.

As reported in The Hill, Nunes sent a letter to Director of National Intelligence Dan Coats saying the unmasking requests were made without specific justifications on why the information was needed.

“We have found evidence that current and former government officials had easy access to U.S. person information and that it is possible that they used this information to achieve partisan political purposes, including the selective, anonymous leaking of such information,”

According to the letter,

T]his Committee has learned that one official, whose position has no apparent intelligence-related function, made hundreds of unmasking requests during the final year of the Obama Administration,

That official had to be U.N. ambassador Samantha Power who had no national security role, her only job was to go to security council meeting and screw Israel whenever she can.

Amazingly, according to Nunes out of the hundreds of the unmaskings requested by these three Obama amigos, ONLY ONE  “offered a justification that was not boilerplate and articulated why” the identity was needed for official duties.Nunes also wrote that the Obama officials specifically sought the identities Trump transition personnel within the intelligence reports.

The Nunes letter also said he plans to introduce a bill requiring “individual, fact-based justifications” for such unmasking requests. “Cabinet members and other senior political leaders cannot be permitted to continue to seek access to U.S. person information within disseminated intelligence reports without documenting a specific, fact-based requirement for the information,” he wrote.

On March 4th, President Trump tweeted that he was “wiretapped ” by the Obama administration. That claim was derided by the MSM and congressional Democrats. Based on the Nunes letter, and earlier reports by Eli Lake and Todd Starnes the real issue with the President’s statement wasn’t that he was lying, it was semantics. There is no proof that the president was subject to a wiretap or any sort of direct surveillance. But there is much proof that incidental surveillance where the American names were to be kept secret, and the Trump-associated names that were to be kept secret were released–for political rather than national security purposes.