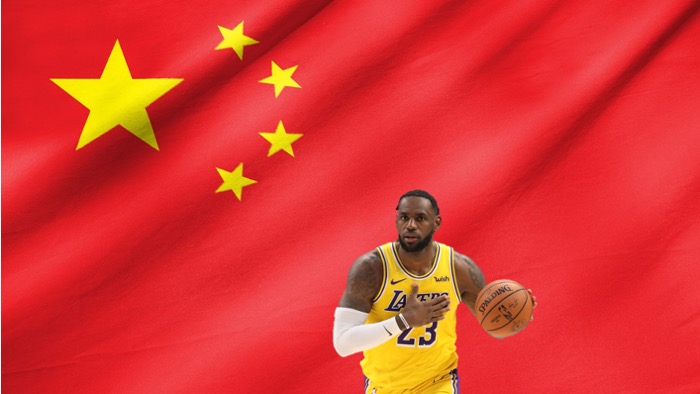 Marxists and liberal activists love to talk about the victim class as a concept until it comes time to put skin in the game for specific people with names and faces. human rights in China

While rich leftists like Lebron pat themselves on the back for how socially conscious and ‘woke’ they are, real moral courage is being shown in another sports league. Women’s tennis.

Imagine if LeBron James said he's willing to pull out of the NBA unless @Nike stops making their shoes with Chinese slave labor.

You have real power @KingJames so why do you lick their boots instead?

Her social media activity from November 2 claims the 75-year-old man coerced her into sex at his home. That post was deleted, and the 35-year-old athlete almost immediately went missing. She hasn’t been seen since.

“According to available information, the former world doubles No. 1 hasn’t been heard from publicly since she alleged on social media that she was sexually assaulted. We would stress that it is important to know where she is and know her state, know about her wellbeing,” Throssell said.
The head of the Women’s Tennis Association (WTA) Steve Simon has said he is willing to lose hundreds of millions of dollars worth of business in China if Peng is not fully accounted for and her allegations are not properly investigated.

“We’re definitely willing to pull our business and deal with all the complications that come with it,” Simon said in an interview Thursday with CNN. “Because this is certainly, this is bigger than the business,” added Simon.

“Women need to be respected and not censored,” said Simon.

He’s ready to take a massive financial hit over an issue of principles.

Let’s contrast that kind of courage to smack-talking Lebron who was last seen mocking a teenage defendant stuck in a trial where the justice system has been caught red-handed stacking the deck against him.

The NBA, with the exception of courageous individuals like Celtics’ Enes Kanter, is a perfect example of the left’s habit of calling fake virtue ‘courageous’ while shutting down the real deal.

They’re all about the grand gestures like wearing BLM slogans on their jerseys or kneeling for the anthem on account of their heartfelt objections to American slavery that was abolished back in Lincoln’s day — but are strangely silent about issues today that might impact their bottom line.

Specifically, they don’t speak out against Chinese slave labor, because doing so would cost them access to the Chinese market, as well as big-dollar endorsement, deals with, say, Nike. Nike, we remind you was among the companies specifically tied to Chinese slave labor. ClashDaily has frequently reported on Chinese exploitation of Slave Labor. For example, we ran this story during the lockdowns.

…Earlier this year, an Australian think tank identified 83 major international brands whose supply chains were connected to the Uighur labor transfers, including Nike and Apple.

Maybe Lebron is too busy getting rich off the sweat of Muslim Slave labor to care about where his ill-gotten gains are coming from.