Do The Dems Care? Doubt It! 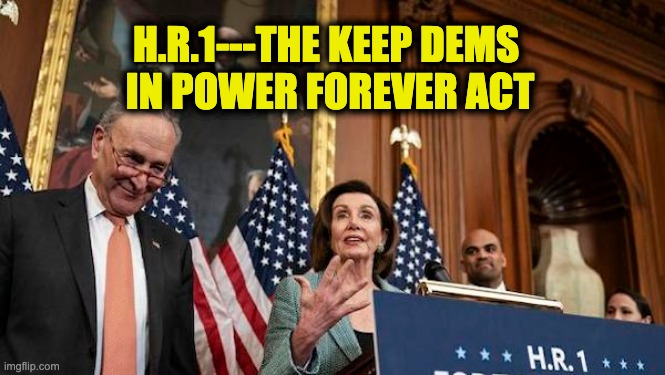 Late Wednesday night, House Democrats passed HR 1 along party lines. The falsely named “For the People Act” severely changes election laws in the United States. A more appropriate name would be the “Keep The Democrats In Power Forever Act.”  Among its other issues, the bill federalizes elections, which is unconstitutional by usurping the states’ rights to their own elections. It bans voter ID and the sharing of voter registration rolls to determine if someone is registered in more than one place.

Twenty Attorneys General sent a letter to House and Senate leaders telling them that HR 1 is unconstitutional. Democrats don’t care.

“This monstrosity of a bill betrays the Constitution, dangerously federalizes state elections, and undermines the integrity of the ballot box,” Rokita said in a statement to Fox News. “As a former chief election officer, and now an Attorney General, I know this would be a disaster for election integrity and confidence in the processes that have been developed over time to instill confidence in the idea of ‘one person, one vote.’”

As the chief legal officers of our states, we write regarding H.R.1, the For the People Act of 2021 (the “Act”) and any companion Senate bill. As introduced, the Act betrays several Constitutional deficiencies and alarming mandates that, if passed, would federalize state elections and impose burdensome costs and regulations on state and local officials. Under both the Elections Clause of Article I of the Constitution and the Electors Clause of Article II, States have principal—and with presidential elections, exclusive— responsibility to safeguard the manner of holding elections. The Act would invert that constitutional structure, commandeer state resources, confuse and muddle elections procedures, and erode faith in our elections and systems of governance. Accordingly, Members of Congress may wish to consider the Act’s constitutional vulnerabilities as well as the policy critiques of state officials.

First, the Act regulates “election for Federal office,” defined to include “election for the office of President or Vice President.”… The Act therefore implicates the Electors Clause, which expressly affords “Each State” the power to “appoint, in such Manner as the Legislature thereof may direct,” the state’s allotment of presidential electors, and separately affords Congress only the more limited power to “determine the Time of chusing the Electors.”… That exclusive division of power for setting the “manner” and “time” of choosing presidential electors differs markedly from the collocated powers of the Article I Elections Clause, which says that both States and Congress have the power to regulate the “time, place, and manner” of congressional elections. That distinction is not an accident of drafting. After extensive debate, the Constitution’s Framers deliberately excluded Congress from deciding how presidential electors would be chosen in order to avoid presidential dependence on Congress for position and authority… Accordingly, the Supreme Court, in upholding a Michigan statute apportioning presidential electors by district, observed that the Electors Clause “convey[s] the broadest power of determination” and “leaves it to the [state] legislature exclusively to define the method” of appointment of electors. McPherson v. Blacker, 146 U.S. 1, 27 (1892) (emphasis added). The exclusivity of state power to “define the method” of choosing presidential electors means that Congress may not force states to permit presidential voting by mail or curbside voting, for example…

… Perhaps most egregious is the Act’s limitations on voter ID laws. Fairly considered, requiring government-issued photo identification at the polls represents nothing more than a best practice for election administration. Government-issued photo identification has been the global standard for documentary identification for decades. Nearly twenty years ago, in the Help America Vote Act, Congress required first-time voters who register by mail without proof of identification to present identification either to the county voter-registration office or at the polls. 42 U.S.C. § 15483(b). It thereby acknowledged the existence of voter fraud and the capacity of documentary identification to prevent it. 148 Cong. Rec. S10489 (Oct. 16, 2002) (statement of Sen. Bond) (“By passage of this legislation, Congress has made a statement that vote fraud exists in this country.”)…

… Despite recent calls for political unity, the Act takes a one-sided approach to governing and usurps states’ authority over elections. With confidence in elections at a record low, the country’s focus should be on building trust in the electoral process… Around the nation, the 2020 general elections generated mass confusion and distrust—problems that the Act would only exacerbate. Should the Act become law, we will seek legal remedies to protect the Constitution, the sovereignty of all states, our elections, and the rights of our citizens.

The Senate now has the legislation, and if some GOP senators get squishy, it may pass. Biden has promised to sign it. It would require an immediate court challenge if  (God forbid) it does pass, as the letter from the attorneys generals ends with that promise to challenge it in court.