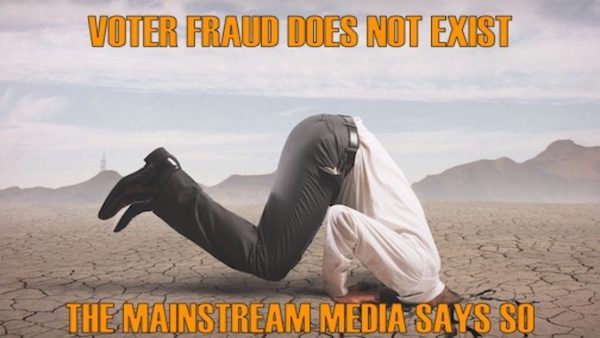 The Clinton campaign and her media facilitators have been excoriating GOP nominee Donald Trump for “damaging our democracy” by raising the specter of voter fraud. But even as the left screams that there is no such thing in the U.S. election system, evidence to the contrary has been piling up for decades.

Despite the evidence, the media has been working overtime to damage Trump by claiming he is wrong about vote fraud. About a week ago CNN led the way by attacking Trump as the “destroyer of our democracy” because, they said, he was attempting to undermine the legitimacy of the elections over concerns of voter fraud.

As part of his October 16 “Reliable Sources” Sunday show, CNN’s Brian Stelter delivered a rant saying Trump was damaging our democracy. “Trump’s biggest lie is about the election itself!” Stelter insisted.

“He is alleging a massive conspiracy,” Stelter exclaimed, “thereby creating a massive challenge for the news media. Trump has been planting seeds for over a year, warning supporters not to trust the government, the polls or the media, because it’s all rigged, he says.”

Stelter went on to claim that voter fraud in the U.S. “rarely happens” and has had no part in swaying any election.

Fund has wrote extensively, for instance, of the 2008 election that put Al Franken in the U.S. Senate for the State of Minnesota. The 312-vote victory Franken eked out, Fund wrote, was not a happy result of just enough votes but a result born of massive vote fraud.

Other reporters have written of vote fraud, of course. Take the report in the Washington Free Beacon that revealed that 141 U.S. counties have more people registered to vote than they even have residents eligible to do so!

These charges have been building for at least 20 years and over the last few months they have shifted into high gear. But we don’t have to stick to recent history to find people complaining about voter fraud. Only eight years ago when he was first running for the White House, even Barack Obama was heard complaining about rampant vote fraud in the U.S.

And have we so soon forgotten that the entirety of the Democrat Party establishment rose up to challenge the 2000 election that put George W. Bush in the presidency? After all, the Democrats were so sure of vote fraud in 2000 that they took the election results to the Supreme Court of the United States of America in hopes of having the election overturned!

But there has been far more recent news of voter fraud. Only in the last month we have seen a massive vote fraud investigation erupt in Indiana with Democrat districts in fully 56 counties finding themselves under investigation.

Then there was the investigation that found one Democrat operative had registered 19 dead people to vote Democrat in Virginia for the 2016 election. And that was just part of the hundreds of non-citizens found to be registered to vote in the Commonwealth.

In addition, CBS in Los Angeles recently found that year after year dead Democrats are still voting. There is even an upcoming report on Chicago’s CBS news station that will prove any number of dead Democrat voters are still on the rolls and voting in every election. Yeah… CHICAGO! Whodathiunkit?

The cacophony of reports has had an effect on the American voter. According to a recent poll by the Associated Press-NORC Center for Public Affairs Research, only four in ten Americans surveyed have confidence that votes will be counted accurately. That distrust is worse among Republicans, half of whom don’t trust the election results at all.

The poll above comes on the heels of another poll, this one by Pew Research, that finds most Americans no longer trust government, so it’s all of a piece.

And who can blame voters when so many stories of the troubles in the system are piling up.

In one case, early voters in Texas found votes for Trump were mysteriously changed to votes for Clinton. County officials later claimed a “software glitch” was responsible for the “error.” Voters clearly have their doubts.

And then there is the new series of undercover videos by Jame O’Keefe’s Project Veritas which has revealed Democrat operatives admitting that they routinely engage in voter fraud in order to win elections by hook or crook.

There is some help for the problem that regular voters can employ to combat voter fraud. A Texas-based voter integrity group called True The Vote has created a new smart phone app for voters to report suspected cases of voter fraud they witness at the polls this year. So, as the saying goes, if you see something, say something.

But remember… the left and their handmaidens in the media insist none of this is even happening. And if you like, I have a bridge in Brooklyn or some useful land in the Everglades to sell you.