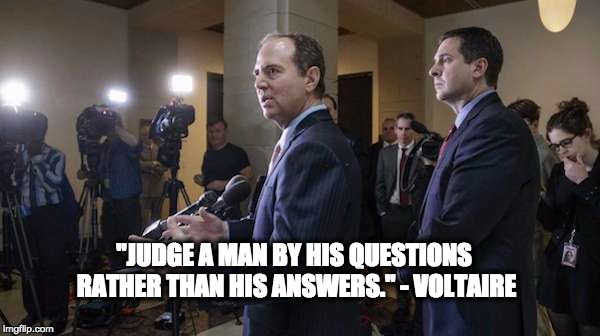 Will the House’s probe into the illegal disclosure of Michael Flynn’s identity to the Washington Post, reportedly made by a U.S. intelligence official in January, ever amount to anything?

It might, if the chairman and ranking member of the Intelligence Committee get a straight answer to the question they posed today to the most senior officials in U.S. intelligence.

The leaders of the House Intelligence Committee asked the three leaders of the intelligence community Wednesday about any time during the last seven months of the Obama administration whenever any of its agents and officials improperly named, or “unmasked,” and disseminated the identities of American citizens picked up in intelligence collection.

It’s been out there since the beginning, but people who don’t have expertise in the field haven’t generally understood it.  “Unmasking” and disseminating the identities of American citizens (in legal language, “U.S. persons”) who are picked up incidentally in routine surveillance against authorized targets has been the obvious source of the intel leaked on Flynn.  It’s also the obvious method by which Trump Tower was “wiretapped.”

Literal wiretaps probably weren’t used in any of the relevant cases.  Wiretapping is old-school technology.  It is still sometimes used, just not very often now, as compared to the constant monitoring of digital communications. Today, digital communications data is recorded in bulk, and searched later for the targets that become interesting to intelligence or law enforcement, for one reason or another.  That includes voice data (“phone calls”), as well as text-based data of various kinds.

When FISA warrants were sought against Trump-connected communications twice in 2016 – and I pointed this out in the earlier posts – they would have been warrants to retrieve data from the store of it that is constantly recorded.  We can be sure the data is constantly recorded on Trump Tower, in particular, because there are targets of national security interest with space leased there.  Those targets include the two Russian banks mentioned in the June 2016 warrant application (see my 6 March post).

In the video below from Trump’s interview with Fox’s Tucker Carlson on 15 March, the POTUS make’s it clear that he understands this distinction.

We have known for some years now that this kind of surveillance is going on.  The formal methods and rules have shifted, but the effect remains basically the same.  National security has given NSA carte blanche to record every digital signal that passes through a hub anywhere in the world, including the United States.  NSA doesn’t have to tap anyone’s phone specifically.  The collection is done at the multiplexing hubs maintained by the telecom industry.

The controls to guard Americans’ privacy don’t operate at the point of collection.  They operate when a government agency wants to retrieve the data and look at personal identities and communications content, as opposed to merely viewing metadata.  The courts have decided that metadata from your communications (time, aliases, which parties were in contact, etc.) isn’t privacy-protected.  But identifying information about you, and the contents of your communications, are protected.  The Fourth Amendment is supposed to mean that it takes probable cause to unlock that data – “unminimize” it – for agencies of the government.

In the two earlier posts, I alluded to the Executive Order 12333 revision made by James Clapper and Loretta Lynch that loosened the rules for agencies retrieving “unminimized” data on Americans.  Clapper and Lynch made this change in the very last weeks of the Obama administration – and their revisions basically loosened the rules into meaninglessness.

Other analysts have been concerned, however, that the rules were easy to get around even before the Clapper-Lynch revision was made (resulting in the so-called “back door” for accessing unminimized data).  And since the strength of the protections for Americans has depended entirely on good-faith use of the rules, inside agencies that have little independent oversight, those analysts have a point.

It is a positive step that the House committee is demanding answers about who may have gained access to unminimized data, across the intel community.  But they will need to ensure follow-up; merely asking for names of people who may have gained knowledge isn’t enough.  To understand the scope of what happened over the last year, there should be an independent examination of all the relevant intel community data systems.

That’s what it will take to track down what searches and retrievals were done on the American targets the House Committee is interested in: the Trump and Clinton campaigns, including their staffs and party liaison personnel.

One final note.  Much was made on Tuesday of a statement by Andrew Napolitano on Fox News:  that intel sources told him Obama got GCHQ, the British equivalent of NSA, to run data searches on Trump and his associates.  The theory of this disclosure is that having GCHQ run the searches – on the NSA database, to which GCHQ has (policy-limited) access – would make them untraceable.

On “Fox & Friends” this morning, Judge Andrew Napolitano said that even if the Obama administration did spy on Trump, there may never be a way to prove it.

He explained that the statutes allow the president to order the surveillance of any person in the U.S., without suspicion, probable cause or a warrant, but that would leave “fingerprints.”

In this case, the alleged surveillance was reportedly ordered in a way that left no record, he said.

But what Napolitano said is only true about whether an official paper trail would be left.  The data systems themselves would still have a record of the user transactions.  (FWIW, I have my doubts about the Judge’s theory about the British intelligence agency, GCHQ.  I do understand that the head of GCHQ, Robert Hannigan, resigned abruptly on 23 January, just after Trump took office.  There could be a nefarious reason for that.  But quite honestly, it looks to me like a smokescreen, for three people to suddenly come forward at the same time and inform a Fox News contributor that, regrettably, there won’t be a way to pin any of this on someone in the United States.  The intel community data systems should still have those user/keystroke logs.)

At any rate, the House Intelligence Committee has taken the first step down the right path.  It’s a good start.  We’ll see if having the Trump administration in charge now brings truthful responses from the IC.