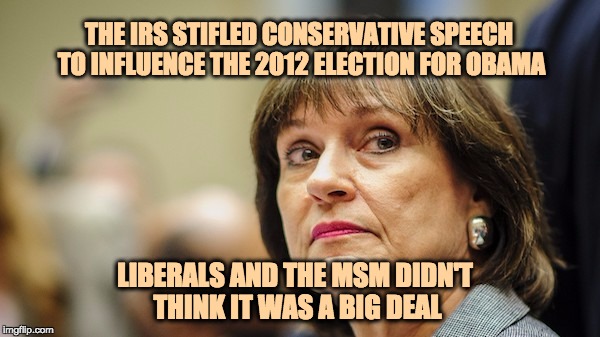 The 2012 presidental election featured a real political influencing scandal…although that time it wasn’t the Russians, it was the Lois Lerner and the IRS stifling conservative speech in an attempt to ensure Barack Obama’s reelection. Back then the liberal media didn’t think it was a big deal.

Republican leaders in the House are calling on Attorney General Jeff Sessions to reopen the case into Lois Lerner’s persecution of conservatives while leading the IRS.

You no doubt remember just a few years ago when we learned that the government agency was picking out conservatives and conservative organizations for particular scrutiny, while allowing liberal and non-partisan organizations to operate as usual. Documentation discovered through Freedom of Information Act (FOIA) requests proved that conservatives had a much more difficult time dealing with the IRS than their left-leaning counterparts and that these difficulties were mandated from the highest offices in the IRS (and perhaps as high up as the White House).

As the IRS scandal was unfolding Congressional Republicans, and conservatives across the nation, demanded a federal investigation into the obviously immoral and probably illegal behavior at the agency. It was around this time that the Democrats first found a way to rely on the new “dog ate my homework” defense, and Ms. Lerner’s computer suddenly crashed and any evidence of her malfeasance was lost. Or at least, that’s what Obama’s Justice Department told us. In fact, in 2015 the DOJ told us that they were going to have to drop the case against Lerner (after two years of investigating) because they just couldn’t cobble together enough evidence to convict her of wrong doing. Lerner’s crashed hard drive, the destruction (or disappearance) of the mandated digital backups that the government usually keeps, and the wiping of emails from all of the key players just made it too difficult to prosecute the case. (Can we just say how unfortunate it is that all of these problems happened at exactly the same time to all of the people involved in the investigation? It’s just one HUGE coincidence… or so the media and the Democrats tell us.)

Thankfully, because elections have consequences, Congressional Republicans can now turn to President Trump and Attorney General Jeff Sessions for a REAL investigation.

On Wednesday, Ways and Means Committee Chairman Kevin Brady and Tax Policy Subcommittee Chairman Peter Roskam sent a letter to AG Sessions telling him that their committees had gathered an extensive amount of information while investigating the IRS scandal but that Obama’s Justice Department refused to consider the material. Instead, the Obama administration ignored the evidence and pretended as if nothing had happened. According to Brady and Roskam, there is clear evidence that Lerner was invovlved in criminal activity during her time as the director of the Exempt Organizations Division of the IRS.

“On April 9, 2014, the House Committee on Ways and Means voted to send a letter to the Department of Justice referring former IRS Exempt Organizations Division Director Lois G. Lerner for criminal prosecution. As indicated in the attached letter, the Committee’s nearly three-year investigation uncovered evidence of willful misconduct on the part of Ms. Lerner. Despite this fact, and for what many believe were purely partisan reasons, the prior Administration refused to review Ms. Lerner’s misconduct….

It is clear that when the DOJ announced in October 2015 that it would not bring charges against Lois Lerner, the agency was following President Obama’s signal on how he wanted the investigation to be handled,” they continued. “Taxpayers deserve to know that the DOJ’s previous evaluation was not tainted by politics.”

The Trump administration has yet to respond to the letter but there is hope among Republicans that they will take up the cause and clear the corruption out of the IRS. To this day many Republicans wonder if the IRS’ impact on the 2012 election may have kept Mitt Romney from winning, while ensuring a 2nd term for President Obama.