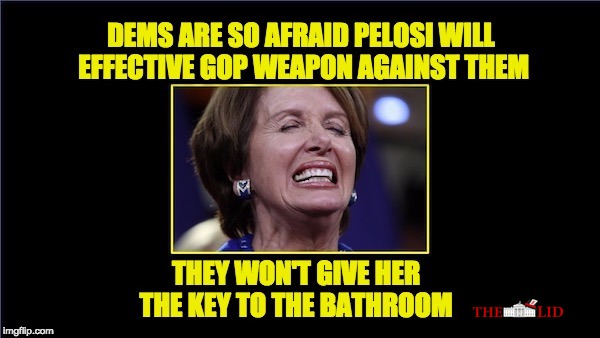 It’s bad enough for Democrats that House Minority Leader Nancy Pelosi will be a massive liability for all their candidates next year. What compounds that problem is that privately, House Democrats know all too well how harmful Pelosi’s leadership continues to be, yet are powerless to shake things up.

A new Politico report highlights why Republicans will be quick to remind voters that a vote for any House Democratic candidate next year is a vote to empower Pelosi. Pelosi’s astonishingly bad poll numbers show why this is something voters will see a lot of in 2018:

“Pelosi remains a deeply unpopular figure among GOP voters. She has only a 14 percent favorability rating with Republicans, according to a Politico/Morning Consult poll released Wednesday. And she doesn’t do much better with independents — just 20 percent of those voters view her favorably.”

Tellingly, House Democrats confided in Politico about how nervous they are, yet would only do so anonymously:

“’There’s a real widespread sense if the Republicans’ only attack on us is Nancy Pelosi, why are we leading with our chin?’ said one House Democrat. ‘There’s a greater and greater sense that it’s time for a change in leadership.’”

Another House Democrat added that the entire caucus should be “concerned” about Pelosi being a “political liability” in 2018:

“’We should all be concerned,’ said one House Democrat, ‘that this could be a political liability for us to pick up seats.’”

Late last year, Pelosi faced a stronger than expected challenge from Tim Ryan, and even now, months after the leadership question was settled, some of her colleagues are still plotting behind her back:

“Several rank-and-file Democrats said there have been quiet, small-group discussions recently about whether there should be a leadership shakeup ahead of the 2018 midterms, and, if so, when.”

Another measure indicative of Pelosi’s radioactive politics is that the DCCC didn’t even bother to defend Pelosi, declining to comment for the story. Thankfully for Republicans, Pelosi shows no sign of bowing to reality and letting fresh leadership take over.