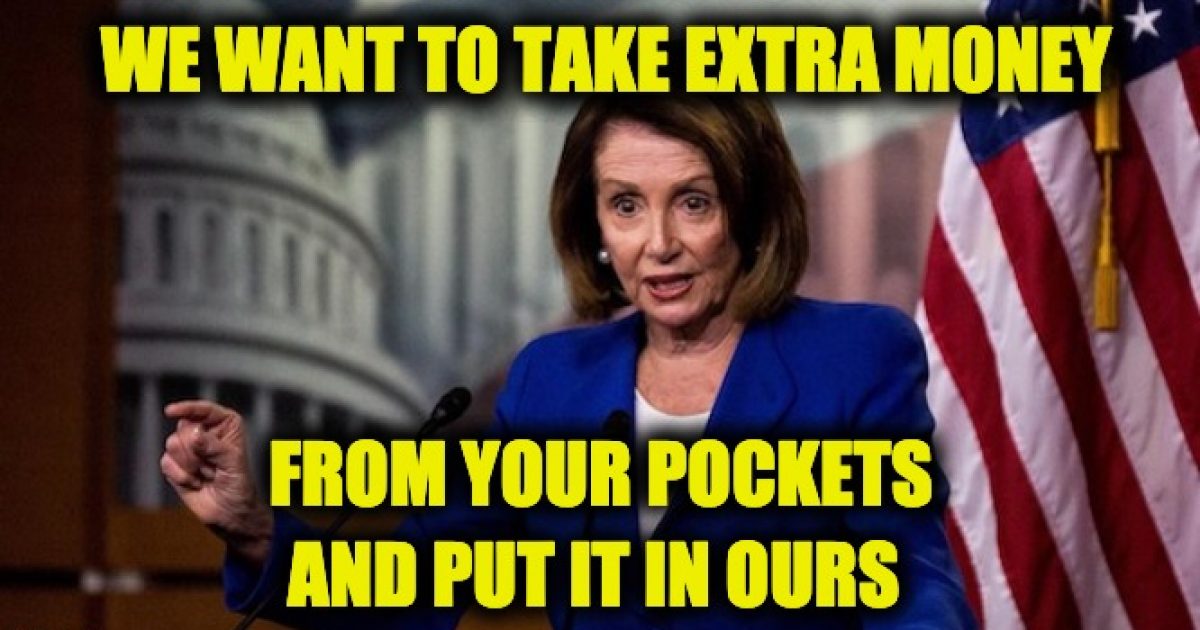 House Democrats are so pleased with their performance in Congress that they believe taxpayers should be giving them a $4,500 pay raise.

Spending leaders have reportedly voiced support for 2020 funding bills that would no longer block cost-of-living adjustments. Congress had voted to freeze congressional salaries at $174,000 in 2009 as the midterm elections approached and while the Obama economy struggled.

GOP leaders struck down the automatic increases every year since.

Now, with Democrats regaining control of the House following the 2018 midterms, they’re setting their sites on a pay raise. Perhaps they think trying to push a duly elected president out of office qualifies them for more money.

Evan Hollander, a spokesperson for the House Appropriations Committee, said: “There is strong bipartisan support for these modest inflation adjustments.”  But understand to the Democrats, if they find one Republican who isn’t sure about a bill while the rest of the GOP hates it with a passion, that’s bipartisan.

The #LeftUnhinged Democrat Party wants to grow the Swamp and give Congress a pay-raise with Americans hard-earned tax dollars.

‘Bipartisan support’ is questionable at best, as opposition remains for anything that would provide poor optics to a governmental body already viewed negatively by the American people.

“A salary increase for us?” Rep. Doug LaMalfa (R-CA) scoffed. “It’s not very high on my radar, and it’d be as popular as the plague. It’d show kind of a disconnect with the people,” An appropriate analogy since most American voters see Congress with more disdain than the bubonic plague.

“I think the American people would think that Congress ought to earn it first,” Senate Appropriations Chairman Richard Shelby (R-AL) suggested.

Have They Earned It?

It would appear House Democrats have moved on from their slogan of “for the people” and shifted more towards concern ‘for their wallets.’

Have they earned that right?

To date, their only legislative accomplishment has been a symbolic vote to pass amnesty legislation for Dreamers, putting the rights of illegals far above those of the people. Well, that and sending subpoenas to everyone who ever met Donald Trump, and holding his kindergarten teacher in contempt because she believes that being dead allows her to ignore a congressional subpoena.

Roll Call reported in April that the opposition party has made a habit of holding “votes on resolutions that do not carry the force of law and are designed simply to send a message.”

Furthermore, how is $174,000 a year not enough of a salary for members of Congress? It’s more than three times the average American’s salary, and yet still isn’t enough for these socialist elitists? Guess what? They aren’t glued to their seats, if they don’t like their salaries, they should look for another job. If they want to spend more money on themselves, perhaps they can sponsor a class for the members like AOC to learn the purpose of appliances such as trash compactors.

In 2011, two years after congressional pay raises were frozen at that rate, the Department of Defense reported the estimated salary of a Navy SEAL “with over a dozen years of experience and an E-7 pay grade” was about $54,000.

Who deserves a higher salary in that scenario?

And don’t forget members of Congress have other amenities such as free membership to the congressional health club and free parking at airports. And don’t forget those tax-payer settlements in sexual-harassment cases and annual allowances (averaging $1.27 million in the House and $3.3 million in the Senate) to staff and manage their offices almost entirely as they see fit, as well as for travel and other expenses.

The House averages 138 legislative days a year, and the Senate averages 162 (the Senate needs the extra time, to allow for Chuck Schumer to slander Republicans), Here’s an Idea, Democrats are so enamored with a $15/hour wage for fast food workers. Since the fast food workers are on duty longer than the Congressional members, maybe they should make $15/hour that the congressional pay rate going forward. That’s something the people will no doubt get behind.