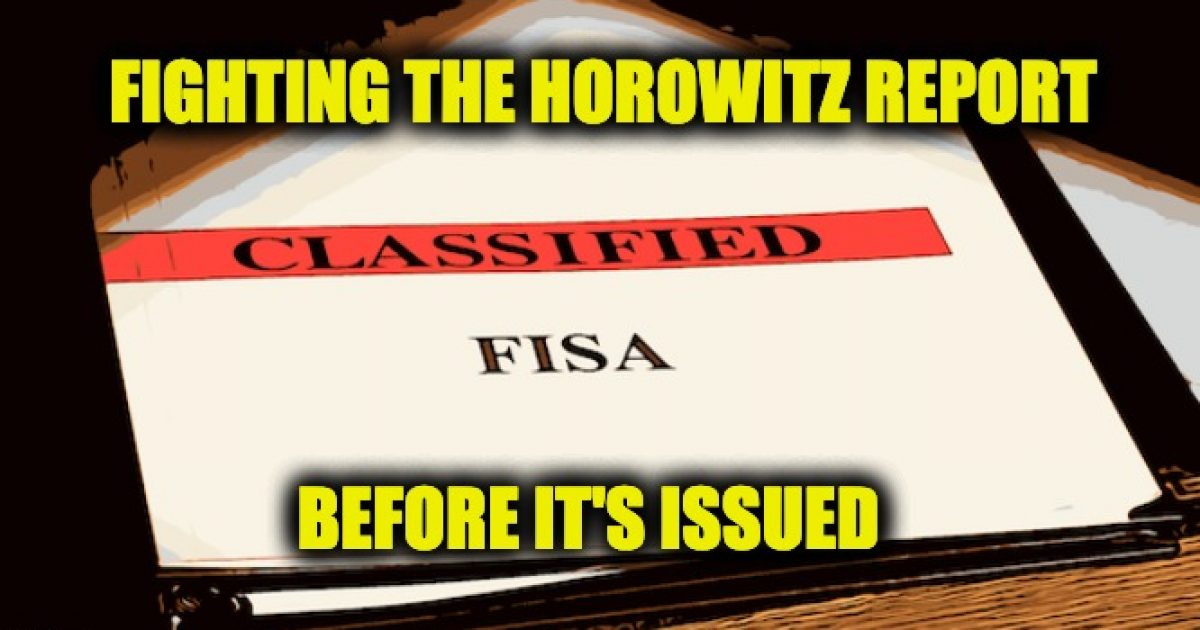 Preemptive “leaks” in the last couple of weeks have served to illuminate the defensive approach of the persons and stratagems likely to be exposed by the Justice Department Inspector General Michael Horowitz’s report that will be published on 9 December.  One aspect of this approach is an oblique and rather elaborate one and is worth examining. Horowitz Report

Two instances of it have been evident so far.  One I have written about before: the planting of a narrative that the IG report “concludes” Joseph Mifsud was not a confidential informant for the FBI.

The second has come up this week, with a Washington Post article claiming Attorney General William Barr disputes an IG finding that the FBI’s counterintelligence agents had a sound basis for opening the “investigation” dubbed Crossfire Hurricane.

In each case, the dubious, implied premise is that the IG would provide professionally dispositive conclusions about the truth or validity of line-operational matters – as opposed to the nature of employee conduct.

That doesn’t mean that professional, line-operational issues don’t come into the scope of the investigations.  But where they do, the DOJ IG is not the attorney general’s source of ground truth on them.

If the AG needs to know if Joseph Mifsud was acting as a confidential informant for an FBI operation, he picks up the phone and calls his officials, who had cognizance of it.

Similarly, as regards the sufficiency of the evidence preceding the launch of Crossfire Hurricane, Barr is the final authority on the matter.  If he wants conclusions from others that are literally about the sufficiency of evidence for operational decision-making, he’ll task his expert line staff to review the files and the evidence and give him an opinion.

Drawing the DOJ’s “final answer” conclusion on this question is the job the AG is appointed for: to assess the sufficiency of the evidence, and decide who will be investigated, and for what, and who prosecuted if applicable.

Barr can call any DOJ or FBI official in and ask for an accounting of evidence and how it was used.  The IG doesn’t have investigative authority on such line-operational matters that the AG lacks.  The IG’s purview is conduct and standards of conduct and operation.

Moreover, the AG doesn’t “dispute” the working conclusions; the IG may draw about an operational question like sufficiency of evidence (which the IG may allude to discuss his findings about personnel conduct).  The AG renders the final judgment on the adequacy of the evidence.  It’s not the IG’s call.  I assume IG Horowitz isn’t confused about that.

The WaPo article implies that there may be something untoward going on, but it was always the case that the AG would – quite correctly – put his own opinion on the line-operational question of whether the evidence justified the Crossfire Hurricane operation.  Rendering that judgment is what the United States has an attorney general for.

For an informative comparison, imagine the Department of Defense wants to look into a military operation in which things went wrong.  Perhaps some soldiers or civilians were killed unnecessarily; equipment broke down, and the operation failed, etc.

The secretary of defense (or perhaps a service secretary or other high-level authority) will appoint a board of inquiry, which will be led by a senior line officer and be composed of subject matter experts (and lawyers, of course).  Experts on military operations will draw conclusions about military operations and performance.  There may be a role for the DOD IG in the inquiry, but it won’t be to render conclusions on military-operational issues.

In the DOJ, whether Joseph Mifsud was a confidential informant for the FBI is an operational question, to be answered on-demand, when the AG asks, by the people who know.  Lies about it may be revealed by an IG’s findings – but the truth about it cannot be established by them.  It’s not something anyone in the DOJ needs to ask the IG to draw a conclusion about.

(An IG’s findings may indicate the need to formally investigate departmental misconduct in relation to Mifsud’s role; i.e., open a criminal investigation with subpoena and grand jury power.  That would be because the IG’s findings raise questions – not because they provide conclusive answers.)

Similarly, the sufficiency of evidence underlying Crossfire Hurricane is a professional judgment call and a matter for experts on evidence and counterintelligence probes.

To the extent that there are written departmental standards for evidence, and for personnel conduct in handling evidence, the IG’s job is to present findings of that.  The findings may well impugn the statutory legality of the evidence.

But that’s not the same thing as judging the sufficiency of the evidence, in terms of its content, sourcing, etc., to trigger an investigation.  Whether or not there should have been an Operation Crossfire Hurricane, based on the extant evidence, is not for the IG to make conclusive judgments about.

The AG is the one who weighs the IG’s findings along with everything else – such as the additional information Barr reportedly alludes to, according to WaPo’s sources (e.g., CIA intelligence) – in making his conclusion.

The WaPo story from Monday, about evidence and Crossfire Hurricane, has a convincing sound to it.  But its premise doesn’t bear scrutiny.  It’s no wonder the AG’s office is answering no questions about the story.  The story is subtly misleading on its face; it’s not the DOJ’s job to get mired in responding to loaded questions.

The WaPo article was apparently written to frame an expectation in readers’ minds that the AG would be disputing conclusions from the IG that are imputedly independent and legitimate.  In other words, to preemptively make it look as if William Barr is engaged in special pleading, instead of the Washington Post and its sources.