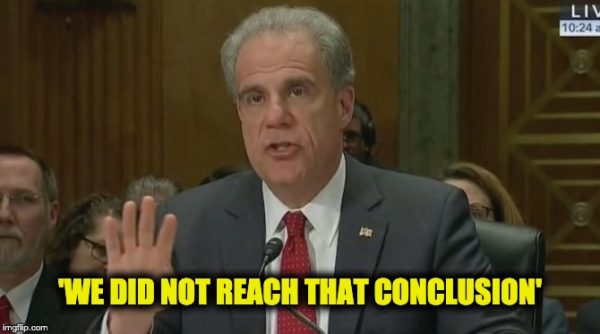 James Comey should delay that victory lap he started after the Horowitz report was issued.  Justice Department Inspector General Michael Horowitz testified to the Senate Homeland Security Committee Wednesday and clarified the conclusion of his investigation. He responded to more than one questioner that his report did not conclude there was no political bias in the FBI’s investigation of the Trump Campaign. He just couldn’t prove it conclusively.  Horowitz did not clear FBI

Following the release of the report, Democrats and former FBI officials were quick to point to Horowitz’s statement that he “did not find documentary or testimonial evidence” of political bias in the opening of Crossfire Hurricane, arguing that the report proved President Trump’s claims of a political witch hunt was a lie. After Wednesday’s hearing, they might want to pipe down.

Chairman of the Homeland Security Committee, Sen. Ron Johnson (R-WI), began the questioning. He noted Horowitz found that Bill Priestap, the former FBI assistant director of counterintelligence, did not exhibit political bias. Priestap opened the investigation into members of Donald Trump’s 2016 presidential campaign. Johnson added that Horowitz “definitely” found other examples of political bias while conducting his investigation. Horowitz responded that he did find evidence of bias but couldn’t prove it (top clip embedded below)

Other Senators were more direct.

When asked by Senator Josh Hawley (R-MO) if he meant that there was no bias, Horowitz explained his investigation did leave the door open to possible political bias because his team could not accept the explanations FBI members gave regarding why there were so many screw-ups (second clip below)

Sen. Hawley: “I think the scope here is what really alarms me,The number of people involved directly involved at the FBI, the repeated decisions to mislead, outright lie to the FISA court, and the total implausibility that the explanations these people offered you, again, maybe they’re incompetent or maybe they had an agenda here. Was it your conclusion that political bias did not affect any part of the Page investigation, any part of Crossfire Hurricane?

Senator Paul (R-KY) asked IG Horowitz the most specific questions and got an agreement that there was evidence of FBI bias, but he just couldn’t prove the bias conclusively (bottom clip below)

Sen. Paul: “I would say that when we look at bias, I guess the first question would be a short question just to reiterate and make sure it’s very clear, you did find evidence of biased individuals who were involved with the — involved with the investigation?”

Sen. Paul: “OK. I think that’s very clear. And is it difficult to determine what people’s motives are or whether they’re biased or not biased.”

Sen. Paul: “All right. And so just by saying you didn’t find it, it doesn’t mean it didn’t exist, it doesn’t mean you couldn’t have had 15 people very biased who influenced every one of their decisions, you just can’t prove it.”

IG Horowitz: “We — we couldn’t prove it, we lay out here what we can prove.”

IG Horowitz may not have found evidence of political bias, but I suspect U.S. Attorney John Durham believes he will. Unlike the Horowitz report, Durham’s inquiry is broader beyond the DOJ and FBI, he can subpoena people who don’t presently work for the government and can impanel a grand jury. Durham issued a statement the day Horowitz released his report explaining that he disagreed with the IG’s conclusions.

“I have the utmost respect for the mission of the Office of Inspector General and the comprehensive work that went into the report prepared by Mr. Horowitz and his staff.  However, our investigation is not limited to developing information from within component parts of the Justice Department.  Our investigation has included developing information from other persons and entities, both in the U.S. and outside of the U.S.  Based on the evidence collected to date, and while our investigation is ongoing, last month we advised the Inspector General that we do not agree with some of the report’s conclusions as to predication and how the FBI case was opened.”

That sounds foreboding. Outside the Justice Dept. also? Perhaps Clapper and Brennan should cancel their celebrations also.

Watch the three videos below, and you decide.

Horowitz did not clear FBI

Horowitz did not clear FBI