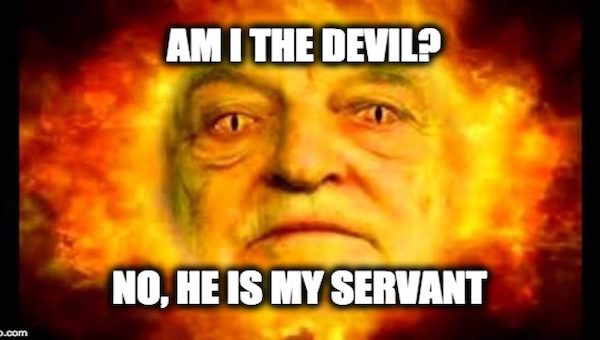 George Soros is a real-life Dr. Evil. The only difference is that he’s more dangerous than the movie one and not funny. In fact, he is scary. Soros disrupted Democracy and Capitalism across the world. And now he is trying to disrupt America by putting criminals back on the street.

Murder rates have climbed an average of 10 percent in 50 of America’s most populated cities where leftist Democrat DAs have taken office thanks to George Soros’s money. The news comes from the financial service website WalletHub which released its latest crime survey last week.

The service reviewed the data from 50 cities and ranked the worst ten with the highest homicide cases per 100,000 residents from July through September:

As Just the News noted:

The top prosecutors in most of these cities are backed by progressive megadonor George Soros, a billionaire who’s spent the last several years injecting tens of millions of dollars into local district attorney races nationwide, backing candidates who support policies such as abolishing bail, defunding the police, and decriminalizing or deprioritizing certain offenses.

In St. Louis, for example, Circuit Attorney Kimberly Gardner is one of the first prosecutors bankrolled by Soros’ financial network of organizations and affiliates, heavily funded by these sources in 2016 and again in 2020.

Amid high homicide figures, Gardner has declined more cases and issued fewer arrest warrants than her predecessor, charging fewer felonies and prosecuting thousands of fewer cases as a result. She has also deferred prison sentences for misdemeanors and nonviolent felonies as part of her reform initiatives.

Gardner has said this is part of her “platform to reduce the number of cases unnecessarily charged in order to focus on the more difficult cases for trial.”

Please note every year or so, someone who tells the truth about Billionaire George Soros gets accused of pushing Antisemitism. The Lid (Me) is an activist for Jewish causes, including the fight against Antisemitism and any claims that criticizing  George Soros is an imbecile—Soros is a Jew who hates Jews as much as he hates capitalism.

One of the reasons American liberals rush to defend Soros is that he is a significant funder of the party and its candidates. Per open secrets, Soros uses his personal funds to donate to Democrats and their party. The cash comes from organizations he runs, such as Soros Fund Management or Open Society Foundation. In the 2020 election, Soros broke his own record ‘by pouring more than $50 million into Democratic campaigns and causes just months before the November election.”

Just the News also reported on several other cities in the top ten being destroyed by Soros-backed, weak-on-crime DAs. Shoot on over to Just the News and see their full coverage.