Hillary’s Turn: Gets Ripped By Laid Off Coal Worker At West Virginia Roundtable 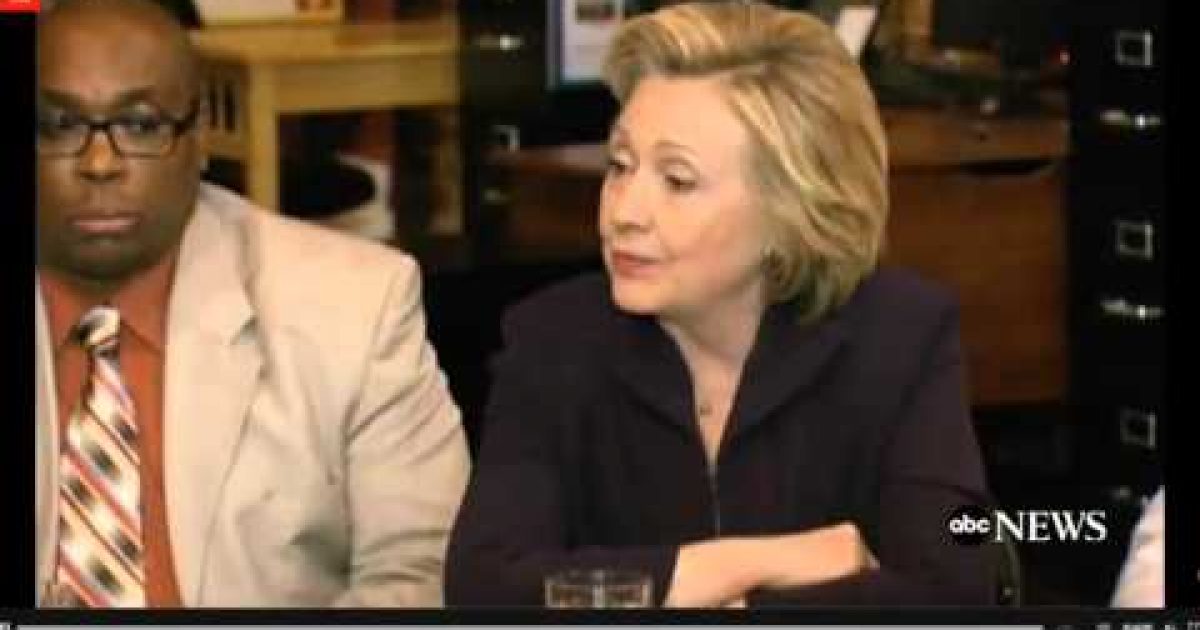 Earlier today we reported that former president Bubba Clinton got booed during a Sunday campaign stop in West Virginia.  On Monday it was Hillary’s turn.  It seems that the people of West Virginia have not forgiven Ms. Clinton for bragging how she was going to take away their jobs. Back in March, Hillary Clinton infamously stated on CNN that, “We have to move away from coal,” and she promised if elected she was, “going to put a lot of coal miners and coal companies out of business.”

At a roundtable in West Virginia this afternoon, Bo Copley, a 39-year-old father who lost his job as a foreman in the struggling coal industry handed the Democratic candidate a picture of his kids as he confronted Clinton asking, how she could pledge to put a lot of coal miners and coal companies out of business and “then come in here and tell us how you’re going to be our friend?”

Copley:  The reason you hear those people out there saying some of the things that they say, is because when you make comments like ‘we’re going to put a lot of coal miners out of jobs,’ these are the kind of people that you’re affecting. [Shows Clinton a photo of his family] This is my family. And while my hope is in God, that’s my future. I want my family to know that they have a future here in this state. Because this is a great state. I’ve lived my entire life here. West Virginians are a proud people. We take pride in our faith in God. We take pride in our family, and we take pride in our jobs. We take pride in the fact that we’re hard workers. Honestly, to call me a coal miner, although I’m in that industry, does a discredit to a lot of the men and women in the industry that actually mine because I, I’m a product of the economy being [inaudible] from my job, but I didn’t actually work out in the field as much as others. I was a fill-in foreman, So, I did go out in the field to do that, but I was a maintenance planner, I planned maintenance on the equipment, our services and things. Things that you have to have to be able to mine the coal. You have to, you have to plan around your certain shifts, or your certain times of day that your best producer has to be worked on, so you don’t want to do it in the middle of the prime shift. So those were the kind of duties that I had. You have to plan a time when that machine’s not running at its normal peak operating time to repair it. I just, I just want to know how you can say you’re going to put a lot of coal miners out of, out of jobs, and then come in here and tell us how you’re going to be our friend, because those people out there don’t see you as a friend.

Clinton: “I know that Beau, and you know, I don’t know how to explain it other than what I said was totally out of context from what I meant, because I’ve been talking about helping coal country for a very long time. And I did put out a plan last summer. And it was a misstatement, because what I was saying is that the way things are going now, we will continue to lose jobs. That’s what I meant to say, and I think that that seems to be supported by the facts. I didn’t mean that we were going to do it, what I said was, that is going to happen unless we take action to try to and help and prevent it. So I don’t, I don’t mind anybody being upset or angry that’s a perfect right for people to feel that way. I do feel a little bit sad and sorry that I gave folks the reason or the excuse to be so upset with me, because that is not what I intended at all. As soon as I saw that people were taking what I said, and in my opinion, misusing it, I called [West Virginia Democrat Senator] Joe [Manchin]. I said Joe, I’m so upset about this, and I wrote him a letter, and told him that I was very sorry that that was occurring because he knows, and he has known me a long time as he said, he knows that that’s not at all what I was saying or what I meant. Now, I can’t take it back, and I certainly can’t get people who, for political reasons or very personal reasons, painful reasons, are upset with me. But here’s what I want you to know, what I want you to know is I’m going to do everything I can to help, no matter what happens politically. I mean that is just how I am made. I’m going to do everything I can to help. Obviously, if I’m fortunate enough to be president, I’m going to be as focused to help West Virginia as I can, whether or not people in West Virginia support me, I’m going ot support you. That’s how I feel about it. And I’m glad you raised it, because I think it’s important to put it out on the table and give me a chance to see your beautiful children and to tell you I’m going to do whatever I can to try to help. I’m not going to over promise, I’m not going to say, oh, it will all be perfect. Because we got to work hard to get to where we can look honestly at your daughters and your son and say, you know what, there’s a future and here’s how we’re going to get to it.

Just then Hillary supporter Senator Joe Manchin (D-WV) began to defend her, but was told by the coal worker that his support of Clinton hurt her politically.

Manchin: Well, if I can say, because I was right in the middle of all that, if you can imagine when that came out, and I’ve said this, in West Virginia we value friendship and if you’re my friend you don’t do everything that way I may want you to do and I might say something that really makes you mad. I have two ways to go when that statement came out. I could have said ‘I thought she was my friend, by golly I’m done, I’m gone.’ Now that’s not the way we were raised, I wasn’t raised that way. So, I said I’m going to call. I call, she’s busy on the campaign trail, calls right back and we had a very frank discussion. If I thought that was in her heart, if I thought she wanted to eliminate one job in West Virginia I wouldn’t be sitting here. I think Hillary knows that. She wouldn’t be here if she felt that way. There is no way you could come into this type of a setting and the way that people are hurting so bad unless you want to help them. And she is willing to take the flack. I’m willing to take the flack because I believe in her, I know that’s not in her heart, I know that I got two people I can count on, Hillary and Bill. And Beau I know, just you sitting here, I know what you’re getting from outside, you know what I’m getting from outside. You’re hearing it every minute. So, if were brave enough to say ‘listen, I know your mad, you want to be mad at me and mad at Beau, but we still love you, were trying to make it better for you,’ I can’t run. If I’m worried about that politically, I’m worried about myself more politically than I am about my state and I’m not going to do that.

Copley: I don’t think they are mad at me. I think they are looking at me as a voice in this moment to say something, because honestly, if I can be candid, I think still supporting her hurts you, it does, because it’s not a good outlook here.

Copley a registered Republican told CNN he had not decided who he would vote for in the May 10 primary,but he added that Clinton did not win him over.