Both Hillary Clinton And John Podesta Made Millions From Russia & Putin 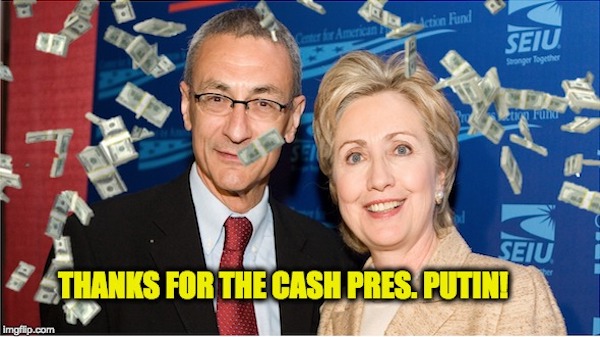 By Jeff Dunetz and Onan Coca

Liberal snowflakes in congress and the MSM have been obsessing about President Trump and Russia ever since he made a joke about Russian President Putin hacking his way into finding those 30K emails she supposedly erased. They never however look at Hillary’s Russian connections and those of her campaign’s CEO, which indicates they are ignoring the fact that both Hillary Clinton and John Podesta made millions from Russia & Putin as the seek verification of their nonsensical story  that President Trump and his team collaborated with the Russians to steal the election away from Ms. Clinton.

Heck if you believe the media reports one could believe that President Trump’s next step is to leave Melania and join the Vladimir Putin on a shopping trip to pick furniture and color schemes for their new life together.

In all seriousness, the liberals are right to be worried about all of those “Russia connections.” However, instead of focusing their time and energy on President Donald Trump and his campaign team, liberal snowflakes should have been vetting their own team for these Russia ties.

The Daily Caller News Foundation’s Investigative Group has discovered that Hillary Clinton’s right-hand man and campaign chairman John Podesta, was on the board of 3 different companies that are closely related to a parent company by the name of Rusnano. Rusnano is a Russian state-run company that was founded by none other than Vladimir Putin and over the years has doled out tens of millions of dollars to the Podesta linked firms. The three companies that Podesta helped lead were Boston-based Joule Unlimited; Rotterdam-based Joule Global Holdings; Joule Global Stichting, the company’s controlling interest. All three companies are high-tech renewable energy enterprises.

Three months after Podesta’s arrival, Joule Unlimited accepted a 1 billion ruble investment from Rusnano, amounting to $35 million in U.S. currency. The firm also awarded a Joule board seat in February 2012 to Anatoly Chubais, Rusnano’s CEO, who has been depicted as a corrupt figure…

One potential legal problem for him relates to the time he joined former President Barack Obama’s White House staff in 2014 as a senior counselor and failed to reveal his 2011 Joule stock vesting agreement in his government financial disclosure form.

Further, he failed to disclose 75,000 common shares of Joule stock he received, as disclosed in a WikiLeaks email.

After Podesta began working at the White House, his lawyer indicated in a Jan. 6, 2014 email that he had not yet finished the legal work on the private transfer of the stock to a family-owned entity called Leonido Holdings, LLC.

Now, Texas congressman Louie Gohmert (R-TX) is calling for an investigation into Podesta’s role with Rusnano and how his relationship with the Russians may have played a part in his time with the Obama administration.

In April 2015 the NY Times disclosed a deal which enabled Russia to own about 20% of the uranium production capacity of the United States for a $2.35 million donation to the Clinton Family Foundation. According to the report a Canadian based company Uranium One, owned the uranium assets was being purchased by Russian state atomic energy agency Rosatom— a deal which had to be approved by various U.S. agencies including the State Department.  Canadian records show that while the State Department was mulling of the deal, the family foundation of Chairman of Uranium One made four donations totaling $2.35 million to the Clinton Family Foundation.

The Times reported that there was more heading into the Clinton foundation that the $2.35 but a significant portion of the money wasn’t reported.

A review of tax records in Canada, where Mr. Telfer has a family charity called the Fernwood Foundation, shows that he donated millions of dollars more, during and after the critical time when the foreign investment committee was reviewing his deal with the Russians. With the Russians offering a special dividend, shareholders like Mr. Telfer stood to profit.

His donations through the Fernwood Foundation included $1 million reported in 2009, the year his company appealed to the American Embassy to help it keep its mines in Kazakhstan; $250,000 in 2010, the year the Russians sought majority control; as well as $600,000 in 2011; and $500,000 in 2012. Mr. Telfer said that his donations had nothing to do with his business dealings, and that he had never discussed Uranium One with Mr. or Mrs. Clinton. He said he had given the money because he wanted to support Mr. Giustra’s charitable endeavors with Mr. Clinton. “Frank and I have been friends and business partners for almost 20 years,” he said.

Mr. Telfer’s undisclosed donations came in addition to between $1.3 million and $5.6 million in contributions, which were reported, from a constellation of people with ties to Uranium One or UrAsia, the company that originally acquired Uranium One’s most valuable asset: the Kazakhstan mines. Without those assets, the Russians would have had no interest in the deal: “It wasn’t the goal to buy the Wyoming mines. The goal was to acquire the Kazakh assets, which are very good,” Mr. Novikov, the Rosatom spokesman, said in an interview.

And “coincidentally” if one believes in coincidences, “shortly after the Russians announced their intention to acquire a majority stake in Uranium One, Mr. Clinton received $500,000 for a Moscow speech from a Russian investment bank with links to the Kremlin that was promoting Uranium One stock.”

Renaissance Capital analysts talked up Uranium One’s stock, assigning it a “buy” rating and saying in a July 2010 research report that it was “the best play” in the uranium markets.

(Note: if one reads chapter two of Peter Schweizer’s Clinton Cash there are even more Clinton Foundation/ Uranium One-related donors).

For those who don’t believe that the Clinton’s help in transferring 20% of this country’s uranium to the Russians in return for Clinton Foundation donations is good enough to establish a Hillary Clinton-Clinton Foundation-Russia relationship, perhaps this next one will help to convince.

A key part of the infamous Russian “reset” was a state department program to aid Putin’s Russia to develop its own version of Silicon Valley. It was called “Skolkovo” and located near Moscow, it housed technology for developing bio-med, space, nuclear and IT technologies.

On first glance the project itself seemed benign and possibly a good deal for both sides, the Russians get access to American cash and some of the country’s best technology, the U.S.-based companies, gets access to the Russian market, receive special tax status and “special access to research in Russia. For example, one investment firm received “priority access to the database of the Skolkovo Foundation projects and companies, enabling it to select the most promising projects early in their development.”  On the other hand, there were warnings from the FBI that and within Ms. Clinton’s own state department at the time that Skolkovo may have created a legal way for Russia to gain access to America’s classified technology– the kind of access they used to employ espionage to access.

Amid all the sloshing of Russia rubles and American dollars, however, the state-of-the-art technological research coming out of Skolkovo raised alarms among U.S. military experts and federal law-enforcement officials. Research conducted in 2012 on Skolkovo by the U.S. Army Foreign Military Studies Program at Fort Leavenworth declared that the purpose of Skolkovo was to serve as a “vehicle for world-wide technology transfer to Russia in the areas of information technology, biomedicine, energy, satellite and space technology, and nuclear technology.”

Moreover, the report said: “the Skolkovo Foundation has, in fact, been involved in defense-related activities since December 2011, when it approved the first weapons-related project—the development of a hypersonic cruise missile engine. . . . Not all of the center’s efforts are civilian in nature.”

Technology can have multiple uses—civilian and military. But in 2014 the Boston Business Journal ran an op-ed placed by the FBI, and noted that the agency had sent warnings to technology and other companies approached by Russian venture-capital firms. The op-ed—under the byline of Lucia Ziobro, an assistant special agent at the FBI’s Boston office—said that “The FBI believes the true motives of the Russian partners, who are often funded by their government, is to gain access to classified, sensitive, and emerging technology from the companies.”

Emails obtained by the Washington Examiner reveal that Clinton Foundation staff pushed Hillary’s State Department to approve a meeting between Bubba Clinton and Vekselberg. The timing of this meeting occurred at the same time the State Dept. was lining up investors for Vekselberg’s Skolkovo project. The emails reveal another case of “blurred lines” between Hillary’s State Department and the Bubba Clinton run foundation.

The Examiner reported that starting in 5/2010 a Clinton Foundation employee, Amitabh Desai, who acted as a go-between for the foundation with the State Department, asked State on behalf the former president, if they had objections to Bubba’s plan to meet with a handful of Russian executives on an upcoming trip through the country. One of the executives named was Viktor Vekselberg.

In April of that year, Bill Clinton’s staff had submitted to the State Department ethics office a request for the former president to deliver a paid speech for a half million dollars. The speech would be delivered in Moscow on June 28, 2010 to Renaissance Capital (mentioned above), an engagement that necessitated the trip to Russia that Desai described. The State Department had given its approval for the trip just two days after Bill Clinton’s office filed its request.

The former president’s travel to Russia for the speech and potential meetings with Vekselberg and others came at the same time the State Dept. was helping Vekselberg with his Silicon Valley-like project, Skolkovo.

As revealed above, Hillary Clinton and the state department was “tasked with finding companies to invest in and work with Skolkovo in the early months of her tenure.”

Four days after Hillary Clinton met with then-Russian President Dmitri Medvedev in March 2010, Medvedev announced that Vekselberg would head up the Skolkovo project.

Just one day after Hillary Clinton had a private phone call with John Chambers, CEO of Cisco, Medvedev met with Cisco executives in California. That same day, Vekselberg announced that Cisco and Boeing would invest in Skolkovo.

Both Cisco and Boeing are major Clinton Foundation donors. Cisco paid Bill Clinton $256,000 for a speech in Oct. 2010, just three months after Vekselberg’s announcement that the firm would invest $1 billion in Skolkovo.

As Peter Schweizer reported in “From Russia With Money“, 17 of the 28 companies that were ultimately listed as “key partners” in Skolkovo were also Clinton Foundation donors.

Per the Citizens United emails, in 2012 when Hillary was still running State, the Clinton Foundation’s Mr. Desai asked members of Hillary Clinton’s staff if they had “concerns” about Vekselberg attendance at an upcoming Clinton Global Initiative meeting. At the time Vekselberg was still working with State finding investors for the Skolkovo project.

So the bottom line here is that yes…it’s true that Donald Trump and Vladimir Putin said nice things about each other.  But when you get right down to it,  the fact that Hillary Clinton may have used her position as secretary of state to trade U.S. military technology and uranium assets for donations to the Clinton foundation should be a bigger concern to American voters, as should be John Podesta’s corporate and financial connections to Vladimir Putin. Americans are very smart and these “Russian connections should be concern… that is if the liberal snowflakes in congress and the mainstream media cared about the truth.