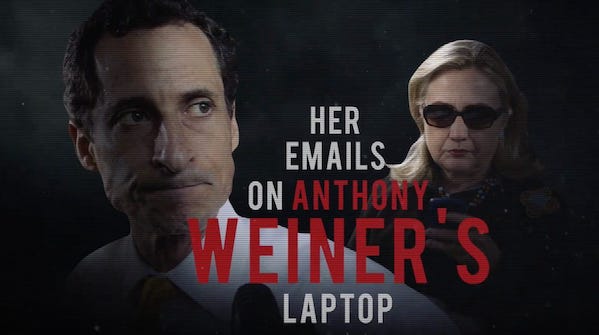 Could you believe that the Obama administration would try to cover-up the Hillary Clinton emails found on Anthony Weiner’s laptop? Well–yeah.  FBI agent John Robertson, the man who found Hillary Clinton’s emails on the laptop of Anthony Weiner, claims he was advised by bosses to erase his own computer.

Former FBI Director James Comey, you may recall, announced days before the 2016 presidential election that he had “learned of the existence” of the emails on Weiner’s laptop.

Weiner is the disgraced husband of Clinton aide Huma Abedin.

Robertson alleges that the manner in which his higher-ups in the FBI handled the case was “not ethically or morally right.”

His startling claims are made in a book titled, “October Surprise: How the FBI Tried to Save Itself and Crashed an Election,” an excerpt of which has been published by the Washington Post.

Robertson alleges that the FBI did nothing for a month after discovering Clinton’s emails on the Anthony Weiner laptop.

Only after he spoke with the U.S. Attorney’s office overseeing the case, he claims that the agency took action.

“He had told his bosses about the Clinton emails weeks ago,” the book contends. “Nothing had happened.”

“Or rather, the only thing that had happened was his boss had instructed Robertson to erase his computer work station.”

This, according to the Post report, was to “ensure there was no classified material on it,” but also would eliminate any trail of his actions taken during the investigation.

Now that the WaPo has confirmed (as I first reported @ RealClearInvestigations in 2018) the fact that FBI agent John Robertson blew the whistle on Comey covering up new Hillary emails he discovered on Weiner laptop, how was that suppression of evidence not obstruction of justice?

FBI Did Nothing About Hillary Clinton’s Emails For Months?

Robertson’s assertions match up with a Wall Street Journal report from 2018.

In that report, text messages between agent Peter Strzok and his girlfriend, lawyer Lisa Page, indicated the former had been called to discuss the newly discovered emails on September 28th.

Those emails wouldn’t be revealed until former Director James Comey notified Congress about them a month later on October 28th.

A book written by James B. Stewart in 2019 asserts that FBI agents had referred to the discovery of Hillary Clinton’s emails as an “oh s***” moment.”

One agent admitted there were “ten times” as many emails as Comey admitted to publicly.

These allegations make it difficult to say Comey did not lie to the public – if not Congress.

Robertson’s story is being revealed as U.S. Attorney John Durham investigates the FBI’s role in the origins of the Russia probe into President Trump’s campaign.

Recently released documents from the DOJ show multiple FBI officials had “accidentally wiped” their phones after the Office of the Inspector General (OIG) requested them.

Erasing evidence is a consistent theme for the Obama-era FBI.

Meanwhile, the Senate Homeland Security Committee has voted to authorize over three dozen subpoenas and depositions of some of these officials, including Comey.

Democrats seem skittish about what Durham is uncovering.

“We are concerned by indications that Attorney General Barr might depart from longstanding DOJ principles,” a letter to the IG reads.

They contend Barr may “take public action related to U.S. Attorney Durham’s investigation that could impact the presidential election.”

Top Democrats have also been threatening to impeach Barr over the investigation.

Kevin Clinesmith, one of the FBI officials involved in gathering evidence in the Russia investigation, pled guilty last month to making a false statement.

He was accused by the Inspector General of altering an email about former Trump campaign adviser Carter Page.

President Trump’s Chief of Staff, Mark Meadows, said in July that he expects further indictments and jail time to come out of Durham’s probe.

Democrats, Comey, and others at the FBI might be a little nervous.