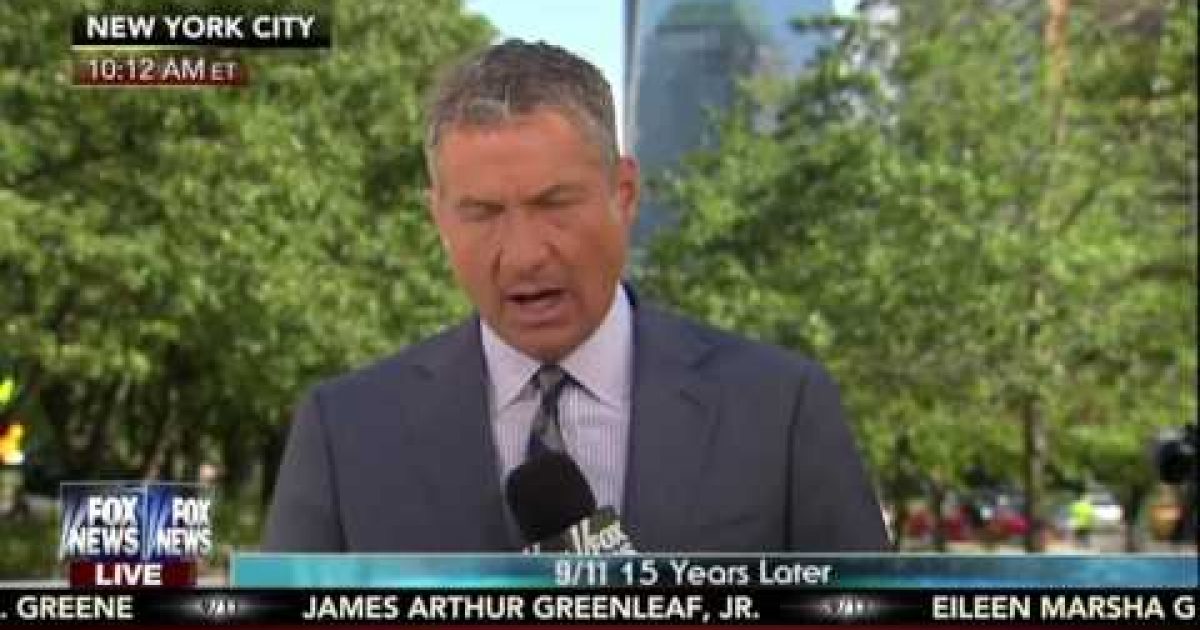 Senior Fox News Correspondent Rick Leventhal just reported that Hillary left the 9/11 ceremony at Ground Zero because of a medical episode. She appeared to have fainted as she was being helped to her van (the video of his report is below.

See the picture above, this was a few seconds later. Look at Hillary’s arms.  It is clear she was being carried:

The reporter began with:

I have a law enforcement  who was there, who was 15 feet away from Hillary Clinton. He says she was standing on a curb with her protective detail waiting for her motorcade. They were surprised to see her because she wasn’t supposed to be leaving yet, so they had to wait for the motorcade. When it finally rolled up my source said she stumbled on the curb, appeared to faint, lost one of her shoes. Her protective detail I’m told helped her in the van and they took off in the direction of the hospital. They grabbed her shoe and grabbed the rest of her detail. Her shoe was given to that detail who was following the other two details and they left ground zero early just moments ago because of some apparent medical episode that Hillary Clinton was suffering. It’s not terribly hot today, John. It was warm, certainly warm and warm at the scene but again, Hillary Clinton, my source who was 15 feet away said she appeared to be having some sort of medical episode, had to be held into her van and left ground zero early before the ceremony ended apparently because of a medical problem.

A minute later Leventhal came back on and said

One other note about the Clinton episode, John, it happened in an area that was off limits to the press. So the pool reporters that follow Hillary Clinton wherever she goes didn’t see it or know about it. As far as we know there are no cameras at that location and the Clinton campaign still has not confirmed that there was any problem with Hillary Clinton. We still haven’t gotten confirmation of why she left early, but we have confirmed through a second source that she , in fact, leave early and apparently according to my source who was 15 feet away from the former senator, John, she was clearly having some kind of medical episode, stumbled and nearly fell and her knees buckled and was helped by her protective detail into her van and left ground zero within the last 30 minutes.

Ms. Clinton is rumored to have health issues, in fact last week when the FBI released its interview with Ms Clinton she admitted she couldn’t remember her exiting the State Department briefing before she left office in February 2013. She blamed it on concussion she received in December 2012 and a blood clot she developed in January 2013.

Is this a continuation of her health issues? We may find out.

Pool of reporters who protectively travel w/Hillary Clinton are being penned in at 9/11 memorial, not informed of her current whereabouts.

Mmmmm. But according to Rick Leventhal it isn’t hot enough–according to the National Weather Service it was 79 degrees at 11:30 AM about an hour after the first report.

At 11:47 AM: Fox News Showed the Clinton motorcade leaving her daughter’s apartment for points unknown:

Video of Hillary Leaving Ground Zero ceremony–she seems to collapse as she enters the vehicle:

The collapse from a slightly different angle. Notice that before the van arrives Hillary is using the metal barrier for support. And her Secret Service body guards practically carry her into the car:

Angle 2
Video of Hillary
Unable to stand
Collapses & is carried into van#HillarysHealth#HillaryHealth#SickHillary pic.twitter.com/rfa4CvAEDl

Washington Post’s Chris Cillizza had been attacking people who suggested Hillary had heath issues, now says her heath is a legitimate issue in the campaign, “Clinton’s health no longer just the stuff of conspiracy theorists.”

Whether Clinton likes it or not, her “overheating” episode comes at a very bad time for her campaign. Thanks to the likes of Rudy Giuliani and a small but vocal element of the Republican base, talk of her health had been bubbling over the past week — triggered by a coughing episode she experienced during a Labor Day rally.

That talk was largely confined to Republicans convinced that Clinton has long been hiding some sort of serious illness. I wrote dismissively of that conspiracy theory in this space last week, noting that Clinton had been given an entirely clean bill of health by her doctors after an episode in which she fainted, suffered a concussion and then was found to have a blood clot in late 2012 and early 2013.

Coughing, I wrote, is simply not evidence enough of any sort of major illness that Clinton is assumed to be hiding. Neither, of course, is feeling “overheated.” But those two things happening within six days of each other to a candidate who is 68 years.

Clinton’s health no longer just the stuff of conspiracy theorists.

Whereas Clinton and her campaign could laugh off questions about her health before today, the “overheating” episode makes it almost impossible for them to do so. Not only has it come at a time when there was growing chatter — with very little evidence — that her health was a problem but it also happened at a 9/11 memorial event — an incredibly high-profile moment with lots and lots of cameras and reporters around.

But the issue is that Clinton kept reporters totally in the dark for 90 minutes after her abrupt departure from the 9/11 memorial service for a health-related matter. No reporter was allowed to follow her. (Clinton has resisted a protective pool for coverage because Donald Trump refuses to participate in one.) This is, yet again, the Clinton campaign asking everyone to just trust it. She got overheated! But she’s fine now!

(…)I wrote this on Tuesday morning:

The simple fact is that there is zero evidence that anything is seriously wrong with Clinton. If suffering an occasional coughing fit is evidence of a major health problem, then 75 percent of the country must have that mystery illness. And I am one of them.

Well, that is no longer operative. Context matters. A coughing episode is almost always just a coughing episode. But when coupled with Clinton’s “overheating” on Sunday morning — with temperatures something short of sweltering — Clinton and her team simply need to say something about what happened (and why the press was in the dark for so long.)

What seems to be a close up of Hillary Getting Ill This morning. As proof look at the second tweet showing Hillary entering the 9/11 ceremony with the same people. This seems to be correct, but I am not yet ready to swear on it:

@SU2CandMe @hillarycoughing I dunno; have a look at this. Same agent with identical object showing it’s on his top pic.twitter.com/ISrQ6U54JW

Hillary’s doctor says she has pneumonia. I am not a doctor so I cannot dispute the diagnosis. Hillary must be a strong woman, because I had pneumonia twice and each time I needed a few days in bed because It felt like I was hit by a truck.  But she was able to walk to the 9/11 ceremony and again leaving Chelsea’s smiling and waving.

Funny thing is, when she left Chelsea’s apartment about two hours after her “incident”  she didn’t look like someone with pneumonia.