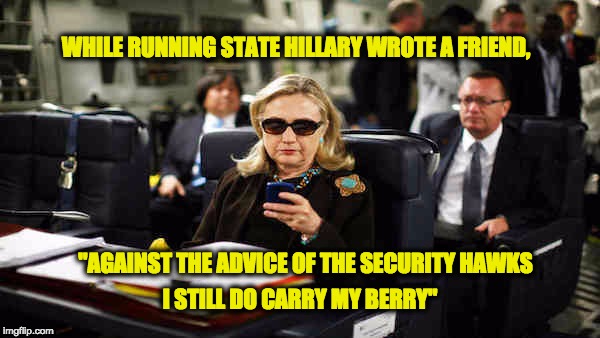 More evidence that Hillary Clinton’s lack of email security wasn’t a case of not knowing–it was a case of her ignoring security warnings.

The email record was obtained in response to a court order from a May 5, 2015, lawsuit filed against the State Department (Judicial Watch, Inc. v. U.S. Department of State (No. 1:15-cv-00684)) after it failed to respond to a March 18, 2015, Freedom of Information Act (FOIA) request seeking: “All emails of official State Department business received or sent by former Deputy Chief of Staff Huma Abedin from January 1, 2009 through February 1, 2013 using a non-‘state.gov’ email address.”

Judicial watch reported about an email, presumably from former Gov. Arnold Schwarzenegger’s chief of staff.  Kennedy wrote Clinton on March 7 2009 that “Just in case you are still allowed to carry your blackberry, your friends are watching with great pride.” Clinton responded on March 8, 2009:

Clinton’s response was  ‘Against the advice of the security hawks, I still do carry my berry but am prohibited from using it in my office, where I spend most of my time when I’m not on a plane or in a “no coverage” country.”

What Clinton was talking about was a  March 2, 2009, internal memorandum from Assistant Secretary for Diplomatic Security Eric Boswell entitled, “Use of Blackberries on Mahogany Row [govt. slang for the senior executive floor]” However the email trail also warned against using any unsecured Blackberry anywhere. Hillary’s Blackberry was unsecured.

It all began with a February 9th email from an unidentified source to State Department Director of the Office of Physical Security Programs Gentry Smith and Senior Coordinator for Security Infrastructure, Bureau of Diplomatic Security Donald Reid, the debate ensued.

The sender (whose name was redacted) advised:

“I wanted to share with you, back channel, a little insight into current thinking in the Secretary’s inner circle on technology issues…” That same day, Mr. Reid responded by acknowledging the “vulnerabilities of portable devices” and saying he would expand the discussion to include Clinton chief of staff Cheryl Mills who wanted “to correct urban myths… re other agencies.” Reid did not clarify what “urban myths” Mills apparently wanted to clear up.

Two weeks later on February 25, Reid sent an email urging that the memo be expanded:

The memo is longish with atch, but I also wonder I it wouldn’t be instructive to include a short paragraph that summarizes the security sins of the past, the reaction on the Hi , the impact of security on career Ambassadorial appointments, etc …

When Boswell’s internal memo issued twelve days later strongly warned of the security risks involved in the use of Blackberries by Clinton and her staff:

Our review reaffirms our belief that the vulnerabilities and risks associated with the use of Blackberries in the Mahogany Row [REDACTED] considerably outweigh the convenience their use can add to staff that have access to the classified OpenNet system on their desktops. [RECACTED] We also worry about the example that using Blackberries in Mahogany Row might set as we strive to promote crucial security practices and enforce important security standards among State Department staff.

(…) I cannot stress too strongly, however, that any unclassified Blackberry is highly vulnerable in any setting to remotely and covertly monitoring conversations, retrieving e-mails, and exploiting calendars.

In a recent court filing pertaining to the currently pending motion to compel Clinton to answer interrogatory questions she refused to answer under oath Judicial Watch argues that interrogatory 14 is particularly important: Interrogatory 14 asks why Secretary Clinton continued to use her personal BlackBerry to conduct State Department business after being advised of the risks in doing so.

This interrogatory is pertinent because Secretary Clinton’s personal BlackBerry was an integral part of the operation of the clintonemail.com system, a subject squarely within the scope of discovery.  It was how she accessed her email.  Without her personal BlackBerry, there likely would have been no clintonemail.com system because the Secretary did not use a desktop or laptop and a State Department BlackBerry would have linked to an official “state.gov” email account.

The questions were submitted to her by Judicial Watch under a court order on August 19, 2016, in a separate lawsuit.

“Mrs. Clinton seemingly ignored the advice of ‘security hawks’ and violated numerous laws related to the handling of classified material and government documents,” said Judicial Watch President Tom Fitton. “The State Department sat on this document for 18 months.  It is a smoking gun that shows why she must be held accountable under criminal and civil law.”

In her responses sent to Judicial Watch and the court on October 13, 2016, Clinton refused to answer three questions and responded that she “does not recall” 20 times concerning her non-government clintonemail.com email system.  She preceded her responses by eight “general objections” and two “objections to definitions.”  The words “object” or “objection” appear 84 times throughout the 23-page document submitted to the court and Judicial Watch.

The Clinton responses to interrogatives were received in the Judicial Watch Freedom of Information Act (FOIA) lawsuit before the U.S. District Court for the District of Columbia, which was first filed in September 2013 seeking records about the controversial employment status of Huma Abedin, former deputy chief of staff to Clinton (Judicial Watch v. U.S. Department of State (No. 1:13-cv-01363)).  The lawsuit was reopened because of revelations about the clintonemail.com system.

This is just another reminder of why people should be ecstatic that Hillary Clinton is NOT the POTUS.