Hillary Clinton Still Says Election Was Stolen From Her, But Did Jon Stewart Steal It? 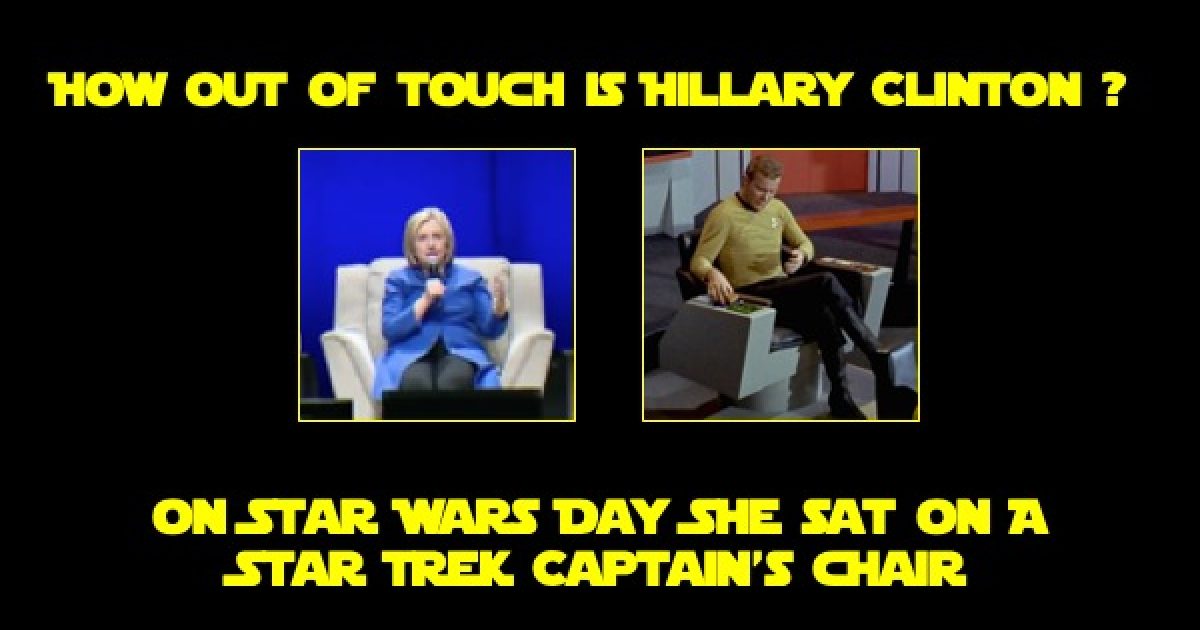 Well, there she goes again! One would think that by now Hillary Clinton would have accepted the reason for her 2016 lost, Donald Trump was a superior candidate. After all, it’s been thirty months since Donald Trump won the 2016 Presidental Election and she is still giving reasons for her loss. On Saturday Hillary claimed the election was stolen from her. Making matters worse some of her supporters are claiming she lost because Jon Stewart decided to retire.

Star Wars day, May the Fourth, Los Angeles was the latest stop of the speaking tour HRC is doing with her husband, former President Bubba Clinton called “Evening with the Clintons.”

When asked about the economy Hillary said the economy was good, but it shouldn’t matter, “It is the economy, it’s always the economy, but that’s not the only reason that we should elect a president, or in this case retire one.” Gee, didn’t Bubba win the presidency because he based his campaign on the words, “it’s the economy stupid.”

Later on, she said, “The Mueller report could not be clearer, the Russians interfered in our election and Trump obstructed justice.” Some might believe her after all Hillary Clinton is an expert on the obstruction of justice, she committed it so many times. But keep in mind she prefers using BleachBit when obstructing justice.

Then she let out the latest version of her whine, “You can run the best campaign, you can even become the nominee, and you can have the election stolen from you.”

Nothing was stolen, Just last week it was revealed that Barack Obama blamed Hillary’s loss on Hillary:

To Obama and his team, however, the real blame lay squarely with Clinton. She was the one who could not translate his strong record and healthy economy into a winning message.

Hillary ran a lousy campaign, and she was a horrible candidate who was out of touch with the electorate. While it’s nothing new, but once in a while, it is nice to hear a Democrat say it.

Some of her supporters though found someone new to blame–Jon Stewart. He made Hillary Clinton lose by retiring. As reported in the New York Post, The latest in cutting-edge academic research is:

a report that says Jon Stewart’s retirement is ACKSHULLY the reason Donald Trump won. We’ll all be able to hear more about this in Frau Pantsuit’s next memoir, “7,573 Other Reasons I Lost That Totally Were Not My Fault, You Ungrateful Pissants.”

The latest in cutting-edge political science/flat-earth theory is that after Stewart quit hosting a comedy show for liberals, the advantage swung to Trump because Democrats forgot there was an election or something.

Proving that the nation’s professoriate is even more obtuse than you would have suspected, Ethan Porter of George Washington University and Thomas J. Wood of Ohio State University note that when Stewart departed “The Daily Show,” ratings sank. “The transition at ‘The Daily Show’ spurred a 1.1% increase in Trump’s county-level vote share,” they claim in their paper, “Did Jon Stewart Elect Donald Trump? Evidence From Television Ratings Data” published in the journal Electoral Studies.

Hang on, “spurred”? Maybe go with “coincided with”? Correlation does not prove causation. If I happen to place my foot on a crumbly bit of sidewalk on the same day your mother suffers an unfortunate fracture in the vertebral column, it does not actually prove that stepping on a crack broke your mama’s back. Show me the mechanism by which my walking habits in New York caused spinal distress to Louise in Boca Raton, otherwise I’m not impressed.

Add George Washington University and Ohio State to the schools with professors too imbecilic to send children you love to study.

Hillary didn’t lose because the election was stolen from her by the Russians, Jon Stewart’s retirement, or the forty-seven other excuses on the list below. Hillary ran a lousy campaign, and she was a horrible candidate who was out of touch with the electorate. Hillary thought she knew better than the American voters. Heck, she even told a group of coal miners that she would have to put them out of business. Her Star Wars Day statement about the economy not being a reason to elect a president is just another example of her lack of a connection,

Her opponent and now President Donald Trump listened to the American people and promised voters that he would make their priorities his priorities. That’s why he won, he listened to the average American and vowed to solve their problems, not the issues of the political establishment.