What Does Hillary Clinton Know About Courage? 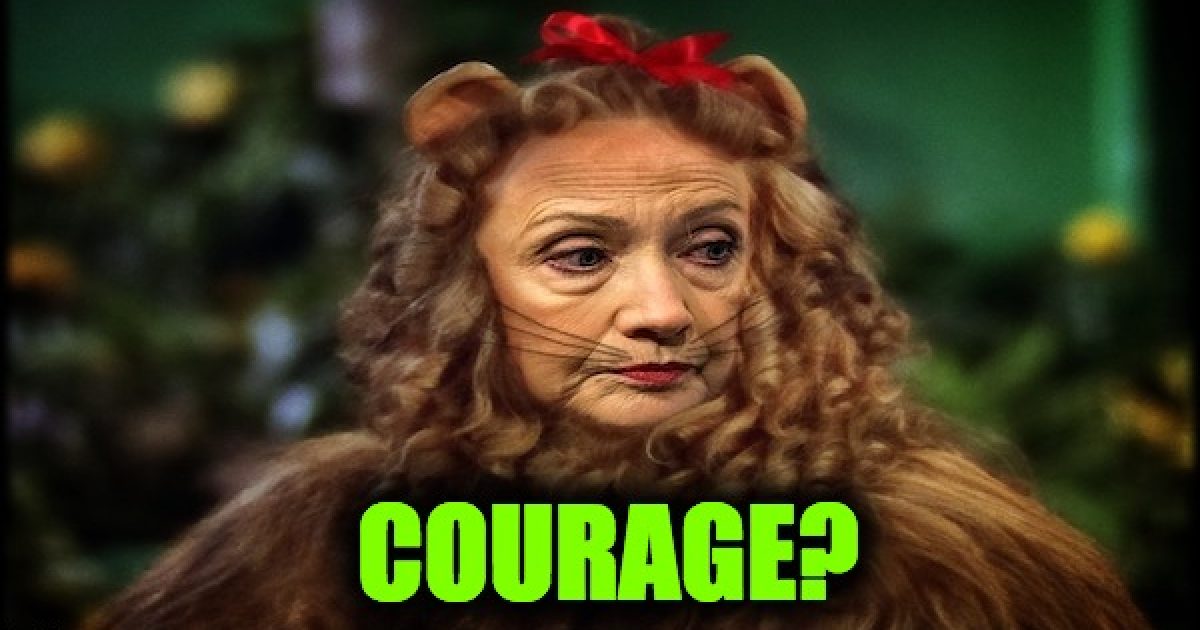 And just think, Hillary Clinton could be sitting in the Oval Office, we would all be screwed. Not just because she is a liberal with regard to the freedoms guaranteed by the constitution, but because Hillary Clinton has no conception of the meaning of the word courage.

On Wednesday, twice-defeated presidential candidate Hillary Clinton offered praise and encouragement to an 11-year-old girl who was reportedly reprimanded for taking a knee during the Pledge of Allegiance.

First the backstory, via CBS News:

Inspired by banished NFL quarterback Colin Kaepernick, Baltimore middle schooler Mariana Taylor, 11, wanted to protest sexism and racism in America by taking a knee, an act that wasn’t well received by her teacher. In February, as Taylor began kneeling during the Pledge of Allegiance, the instructor reprimanded her in front of the class, saying she was required to stand. The confrontation left Taylor in tears.

“Mariana became upset right then and there. She was allowed to leave the classroom upset, the teacher did not suggest any kind of support that she go to the guidance counselor. It wasn’t until her second teacher could not calm her down that she was supportive of Mariana,” Mariana’s mother, Joanne Taylor, told CBS Baltimore.

“It is in my rights to be allowed to kneel … students are allowed to take stands as long as it’s not disruptive to the classroom, and I feel that my confrontation was more disruptive than kneeling itself,” the young student said. “And we need this policy change so other kids don’t go what I went through.”

Actually, the policy, which is self-contradictory, already allows students and staffers to be excused from the flag salute. Baltimore County Public Schools Rule 6307 contains a requirement for “all students and teachers to stand and face the flag and while standing give an approved salute and recite in unison the pledge of allegiance.” Immediately after those words come these: “Any student or staff member who wishes to be excused from the flag salute shall be excused.”

But notice what the rule doesn’t say. It doesn’t stipulate that students are free to take a knee or protest in any other way during the pledge. Being excused from participating and staging a demonstration are two very different things.

In addition to pointing this out to young Mariana, the adults in the room (if there are any) might also make sure the child isn’t merely imitating what she sees overpaid athletes do. Once again, the rule doesn’t specify that students seeking to be excused can’t be questioned on why they feel as they do. The U.S. flag deserves at least that much respect.

It takes courage to exercise your right to protest injustice, especially when you’re 11! Keep up the good work Mariana. https://t.co/vnGheuWyJ0

No, Hillary, you have no idea of what the word courage means.

it takes courage to serve in the military or to be a first responder, or a cop, or even an ice agent, Those people put their backsides on the line every single day to protect the rest of us, that’s courage!

The closest Hillary Clinton ever came to that was the lie you told about landing in Bosnia.  She claimed to be some kind of first lady superhero, getting off the plane and having to dodge sniper fire.

“I remember landing under sniper fire,” Clinton recounted. “There was supposed to be some kind of a greeting ceremony at the airport, but instead we just ran with our heads down to get into the vehicles to get to our base.”

But if you look at the video below you will see that Hillary Clinton was lying (again):

Maybe Hillary Clinton knew courage when she tried to join the Marines but was rejected because she was a woman, Of course, for one to believe that piece of bull turd, you would also have to believe, “a fervently anti-war college student — who worked on the anti-war presidential campaigns of Eugene McCarthy and George McGovern,  and just moved to Arkansas to marry Bill Clinton” tried to join the military.

You see the real reason Hillary Clinton said that Mariana Taylor displayed courage when she knelt for the Pledge of Allegiance is that the failed presidential candidate wouldn’t recognize real courage if it jumped off the roof of her home, did a double backflip and kissed her on the lips.  It’s one of the reasons why I thank God each and every day she lost the 2016 election.