Democratic Strategist’s Rationale For Hillary Loss: Her Campaign Was A “F**king Piece Of Sh*t” 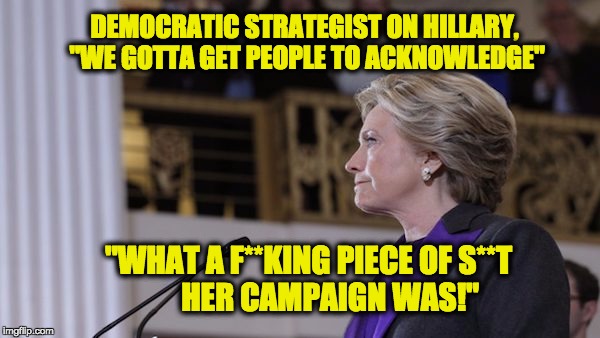 It’s been a little more than seven months since the 2016 presidential election where America legitimately elected Donald Trump the 45th President of the United States. But not to Hillary Clinton, the losing candidate and her party. It seems as if every time a Democrat opens their mouths it’s to invent another reason fake reason for her loss. It is all an attempt to de-legitimize the Trump victory and to deflect people away from realizing that Hillary was incompetent. Well …until now.

In this week’s Rolling Stone,  Tim Dickinson describes a Democratic Party that’s falling apart. And to back up his claim he spoke to Democratic Party operatives (some named others not). And since it is fine for the MSM to publish scandalous report about the President from unnamed sources, it must be okay for me to report about unnamed sources from a liberal medium like Rolling Stone. Dickinson spoke to a Democratic Party strategist who really laid into Hillary Clinton for the way she ran her campaign, and for making excuses. But first he leveled some blame at Barack Obama:

Responsibility rests foremost at the feet of former President Barack Obama. As a candidate, Obama sidestepped the party’s next-in-line culture, riding into the White House on the strength of a then-revolutionary digital-and-grassroots machinery of his own creation. “Obama was almost like the anti-Democrat,” a former DNC chair tells Rolling Stone. “The president didn’t care about the Democratic Party.”

Once in office, Obama had the weight of the world to bear. He staved off financial collapse and secured health insurance for an estimated 20 million Americans, leveraging the party’s infrastructure for these fights. “When you’re at the head of the DNC and you have the White House,” says Sen. Tim Kaine, who chaired the party from 2009 to 2011, “a lot of the job is about promoting the president’s agenda.” But Obama and his team neglected a far less heroic duty: the care and feeding of the national party, which Democrats had rebuilt during the Bush years with a “50-state strategy” that had empowered Obama with dominant Democratic majorities in Congress.

Gee whiz, is he saying that Barack Obama was a narcissist who didn’t care about anything but himself?  Hard to disagree with that.

Next he turned his attention to the losing candidate, Hillary Clinton:

Under Obama, the party infrastructure was honed to elect a president. And being a presidential party is a powerful thing – until you lose the White House. The Clinton campaign lost significantly on its own merits, though the party is loath to admit it. The same candidate who was caught flat-footed by the rise of Obama in 2008 found herself stunned by the grassroots surge behind Sen. Bernie Sanders. “And she was really surprised by how strong Trump was – and part of it was she just sucked,” says the Democratic strategist, who criticizes Clinton despite being entrenched in her center-left, pro-trade wing of the party. “At a really fundamental level we gotta get people to acknowledge what a fucking piece of shit her campaign was, because Donald Trump should not have won this election.” The strategist adds, “Yes, Comey happened. And yes, the Russians happened. But she had more money than God, and they spent all of it trashing him and not actually rebutting his ideological agenda.” By transforming the election into a referendum on character, Team Clinton let Trump off the hook as the frontman for the extremist GOP platform. “The country’s waking up shocked to what he’s doing because Hillary didn’t actually explain to anybody what he was going to do when he became president,” the strategist says. “We focused on him groping people – and not on him saying he was going to end our alliance with Europe or he was going to strip health care. It was an amazing failure of our politics to make our case.”

Hillary ran a lousy campaign and she was a lousy candidate who was out of touch with the electorate. While it’s nothing new, but once in a while it is nice to hear a Democrat say it.