Others Make Charges Just As Absurd. 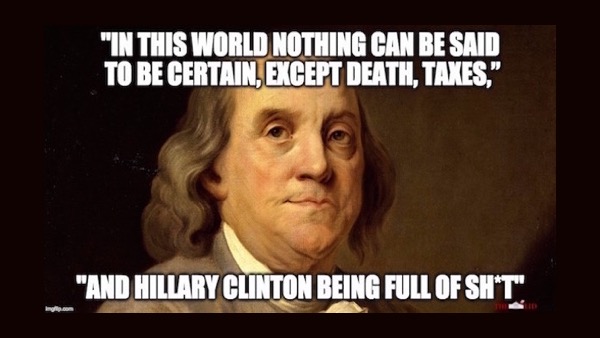 The former Secretary of State was embarrassed back in 2016, losing the general election to Donald Trump in such a spectacular fashion that she hadn’t even written a concession speech for the occasion.  Then, when she did finally concede, she spent the next four years berating Trump and insisting that his presidency was illegitimate on account of some Kremlin-based malarkey that Robert Mueller spent 22 months investigating before deciding not to charge the President with a crime.  Hillary Clinton accusations

Now, Clinton is back with new accusations against the Trump administration that she detailed via social media:

Clinton wrote, “What we saw last night sums up so much of the Trump administration: A law-breaking convention on your dime, on the lawn of your house, to celebrate a president like a king for overseeing the needless deaths of 180,000 Americans—and counting.”

Lawbreaking?  Does she mean that someone in the Trump Administration sent a top-secret email to her on her personal server?

Apparently, the COVID mask issue was a real sticking point for some.

Christine Pelosi, House Speaker Nancy Pelosi’s eldest daughter, characterized the RNC as “illegal” due to “no masks” and “no distancing.” Her Twitter profile image is a photo of her wearing a mask.

Most people I spoke to weren’t concerned about the mask-less RNC. But many suggested that Christine Pelosi’s mom wear a mask even after the COVID crisis was over.  It would certainly prevent people from getting nightmares from her mask-less face.

Other Democrats viewed the RNC as legally ambiguous on account of supposed Hatch Act violations – something that White House Chief of Staff Mark Meadows dismissed preemptively earlier this week.

“Nobody outside of the Beltway really cares. They expect that Donald Trump is going to promote Republican values and they would expect that Barack Obama, when he was in office, that he would do the same for Democrats,” he continued. “So listen, this is a lot of hoopla that’s being made about things, mainly because the convention has been so unbelievably successful.”

Do they really think that White House lawyers did not look at the RNC participation of administration officials up, down, and sideways to make sure nothing illegal was done?  Heck, the way that Adam Schiff-face wants to impeach President Trump every time he goes to the bathroom, of course, the attorneys looked at what was being done!