Hillary, An Arab Sheikh, & The Guy Who Produced The Trump Dossier 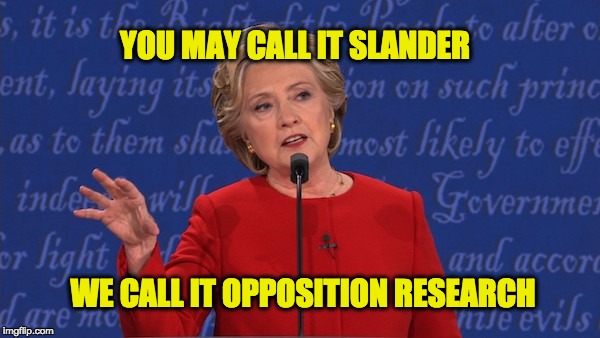 The salacious fake dossier on Donald Trump leaked to Buzzfeed last week would be just a shady international scandal these days if it didn’t map back to Hillary Clinton, peculiar foreign contacts, and a good computer hacking.

And sure enough, each of those trendy patterns shows up in the backstory of Fusion GPS, the intelligence “research” company founded by former Wall Street Journal reporter Glenn Simpson, which was identified late last week as the source of the highly dubious dossier on Donald Trump.

Briefly, regarding the Trump dossier: Fusion GPS was reportedly hired in September 2015, by an unnamed Republican (whether donor or candidate remains undisclosed), to investigate Trump’s potential ties to organized crime.  Sometime between that date and June 2016, the former British intelligence man, Christopher Steele, entered the picture, working for Fusion GPS to pursue a Russian-connections angle.  After the RNC nominated Trump in July, Republican support to the dossier effort stopped, but the Democrats stepped in and took over shepherding it along.

The Weekly Standard’s Mark Hemingway has the go-to summary of Fusion GPS’s prior work doing oppo research on Mitt Romney donors in 2012 (one of whom was suddenly hit by the Obama administration with multiple audits, in rapid succession), and trying in 2015 to impugn the Project Veritas Planned Parenthood videos, by touting the conclusion that they were “manipulated.”  Hemingway reminds us that the “manipulation” charge didn’t hold up:

If you bothered to read the details of Fusion GPS’s report it made some damning concessions, even admitting there was no “widespread evidence of substantive video manipulation.” But overall, the report was calculated to be misleading and was nothing but an underhanded PR stunt for Planned Parenthood.

So it’s not unfair to characterize Fusion GPS as an oppo-sleaze-for-hire company, which so far has made its name working for Democrats and the left.  That’s a blow to any assumption of impartiality on Fusion GPS’s part.

But there’s also the aspect of Glenn Simpson’s prior company, SNS Global LLC, which he founded with fellow journalist Sue Schmidt in 2009 when the two of them first left WSJ.  SNS Global billed itself as offering services similar to those advertised today by Fusion GPS.

And in 2009, it subcontracted with the lobbying firm California Strategies to help an Emirati prince, Sheikh Khalid bin Saqr al-Qasimi, run a PR campaign against the sheikh’s brother, Saud, who had been picked by their father to succeed him as ruler of the UAE Emirate of Ras al-Khaimah.

The reporting on this in the last couple of days has focused on the fact that Khalid bin Saqr al-Qasimi was involved in an anti-U.S. protest and flag-burning during the Iraq war in 2003.  (That and some other of Khalid’s activities were what got him passed over for the succession, and exiled for several years starting in 2003.  Sheikh Khalid spent those years in the UK, returning to Ras al-Khaimah when his father’s health began to seriously decline, just before the late Emir died in 2010.)

It doesn’t cover SNS Global or Glenn Simpson with glory, certainly, to have been involved in a campaign by Sheikh Khalid to smear and impugn his brother’s management of the emirate as crown prince.  The whole project was dubbed a “coup” attempt in media reporting at the time.

But a really noteworthy feature of this weird interlude is that it has Hillary Clinton lurking in the back alley, and involves her long-time associates – including two who were campaign aides for her in 2008 – and a worrisome foreign computer hacking of the client, Sheikh Khalid.

California Strategies was the principal in the lobbying arrangement with Sheikh Khalid.  Khalid apparently first reached out to the company in 2008 – and that’s when he got his first one-on-one with candidate Hillary Clinton, through the good offices of California Strategies’ top men:  Jason Kinney, who chaired a 527 organization for her 2008 primary campaigns; Chris Lehane, oppo researcher and “master of disaster” (including, famously, reacting to “bimbo eruptions”) for the Bill Clinton White House in the 1990s; and Peter Ragone, who worked for Hillary’s 2008 campaign.  There was at least one more meeting with the sheikh when Hillary was secretary of state.

During the period when California Strategies was representing Sheikh Khalid, meanwhile, Kinney’s wife and two other employees of California Strategies donated the very large combined sum of $158,000 to the Obama inaugural committee – and Khalid himself attended the 2009 inauguration.  Yet another recurrence of one of those really special Clinton-type patterns, although it involved Obama in this case.

This was the very connected company SNS Global was keeping during the Sheikh Khalid project.

It was in the latter half of 2009 that California Strategies let a subcontract with SNS Global, whose Glenn Simpson went on in 2011 to found Fusion GPS.  Although Simpson has said he didn’t expect to engage in lobbying as part of this contract, he did register at the time as a lobbyist for a foreign interest.

These are the facts surrounding reports from the Guardian, in June of 2010, that Sheikh Khalid was attempting an effective coup against his brother Saud, with the help of California Strategies, among other U.S. firms, and a British law firm, Cathcarts Solicitors, whose principal in the case was Peter Cathcart.

It was during the time preceding the first 6 June 2010 Guardian article that SNS Global was performing work on the Sheikh Khalid project for California Strategies.  So the Guardian’s summary of documents it obtained relating to the sheikh’s “PR” effort are particularly interesting, in light of the recently revealed Trump dossier:

California Strategies insists “both the law and the facts are on his highness’s side”. But a spokeswoman at the UAE’s London embassy said the allegations are “baseless and without foundation”.

Other tactics explored and employed range from raking up a sex scandal involving the RAK’s ruler, Saud, and meeting Hillary Clinton, the US secretary of state, on visits to Washington. The campaign team suggested Ras al-Khaimah may have served as a “back door” for terrorists planning to blow up the Burj Khalifa in Dubai, the tallest tower in the world, although Dubai police subsequently described reports of an Iranian plot as “baseless”.

Uh huh.  Raking up a sex scandal and suggesting Sheikh Saud was complicit in letting the emirate be a back door for terrorists trying to attack a neighboring emirate.  Where did we just see that type of innuendo lately?

It’s enough to give one pause.  Then there’s this.  As revealed in the San Francisco Chronicle/SFGate.com report linked above, which was dated 8 June 2010 – two days after the Guardian report – Jason Kinney of California Strategies asked Eric Holder (then Attorney General) to investigate the apparent hacking of information on his client Sheikh Khalid.

Kinney became alarmed when he received inquiries from both the Guardian and Der Spiegel about information that would have had to come from unauthorized access to Khalid’s computer files – which apparently included the documents the Guardian described in its articles that same week.

The following ominous introduction to the SFGate.com story will be no surprise to readers who’ve followed the tale of Hillary Clinton’s email exposure:

In a mysterious case of cyber-espionage, a leading California political consulting firm has asked U.S. Attorney General Eric Holder to investigate what it says appears to be computer hacking involving a high-profile client, an ousted Middle Eastern sheikh, which the firm says could compromise “sensitive information relating to U.S. and Iranian security issues.”

The similarity of key patterns is striking, of course.  But so is the fact that Jason Kinney could apparently go directly to Attorney General Eric Holder to ask for help.  California Strategies was plugged in at the highest levels, at the time it was subcontracting with SNS Global.

It shouldn’t be a surprise, then, that when Glenn Simpson moved on to found Fusion GPS, he promptly got high-level oppo work with the Obama 2012 reelection campaign.

In the clubby world of lobbying and partisan activism, he and Fusion GPS don’t seem to have been just some random private intelligence resource – either for a deep-pocketed anti-Trump Republican in late 2015, or for Hillary Clinton’s campaign in 2016.  (In fact, the numerous Clinton connections of the Sheikh Khalid project are capped by the inevitable status of Britain’s Cathcarts Solicitors as a donor to the Clinton Foundation through at least 2015.  Just in case you were thinking any of our key players was out of character for the typical Clinton drama.)

The more layers get peeled back on the Trump “dossier,” the more it comes off as arranged, by political operatives in the U.S., rather than “unearthed” by disinterested professional intelligence experts who just happened to get hired one day.  I continue to think it’s quite possible that Christopher Steele, to the extent he thought he was doing a straightforward investigative job, was being played by the Russians.  (Who, if they were playing their stalkers, would have been laughing body parts off.)

Incidentally, Sheikh Khalid never did manage to hound his brother Saud out of the succession.  The old emir, Saqr bin Mohamed al-Qasimi, died in October 2010, and the UAE leadership made sure that Saud succeeded him.