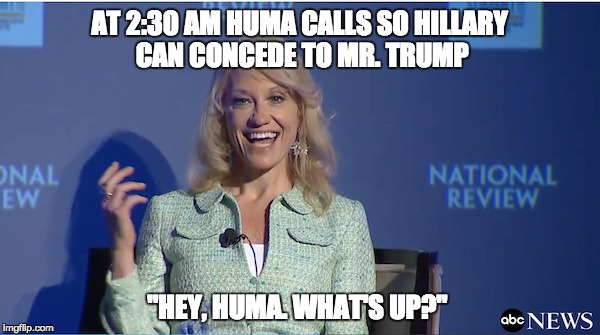 At the National Review Institute’s Ideas Summit in Washington, DC Friday morning, Kellyanne Conway reminisced about getting the call from Huma Abidin

Kellyanne Conway reminisced about the moment Hillary Clinton called to concede to Donald Trump the night of the presidential election. The day before the election, Kellyanne Conway had an email conversation with Hillary’s campaign manager Robby Mook.

Conway recalled. Robby Mook (Clinton’s campaign manager) had agreed the night before through an email to me that within 15 minutes of the AP calling the race for Secretary Clinton, they would wait 15 minutes and then she would take to the podium and declare victory. 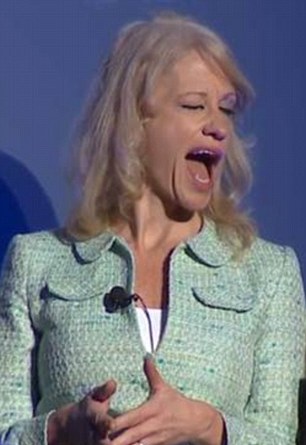 give a concession speech] or she’s going to declare victory either way.

‘And then he said in the event that Mr Trump wins, Secretary Clinton will call him within 15 minutes of the AP,’ Conway said with a wink, implying that Clinton staffers were confident their boss would win.

But Clinton’s camp held up their end of the deal. Conway said that she looked down to see  her phone was ringing.

‘I look down – literally it was like a movie – my phone is ringing and it said “Huma Abedin” [Clinton’s longtime aide]. And I said, “Hey, Huma. What’s up?”

Of course she knew what was up before she answered the phone. She didn’t get phone calls from Huma Abidin in the middle of the night every day.

Ms Conway said that Huma was absolutely lovely on the call as she asked if Mr. Trump was around and available to speak because Secretary Clinton would like to speak to him.  Kelly and said he was very available and gave the phone to the future president.

My husband took a screenshot of that – the 2:30am. I handed him the phone and he and Vice President Pence and their wives were there and the rest is history.

Following the call, President Trump gave his victory speech – marking a break with tradition since the loser of the race usually gives a concession speech first. Clinton gave her concession speech later in the day.

I have never met Kellyanne Conway but I have seen her on TV an awful lot, answering a concession call with a “Hey, Huma. What’s up?” seems like the perfect way for the brilliant and seemingly always friendly Conway.