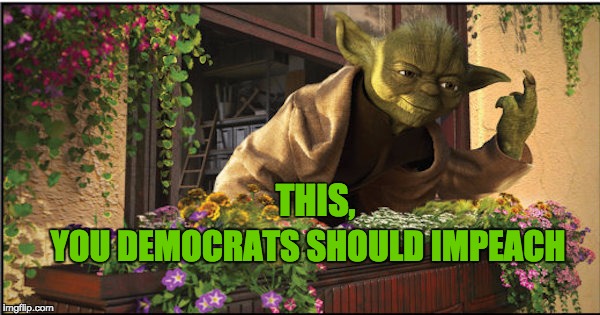 Even before he took office, we started hearing and seeing protesters (rioters) who wanted Trump impeached. NEWSFLASH for the low IQ protesters… you need to be in office first and commit an impeachable offense.

I’m not really worried about this action. Most of them don’t even know what an impeachable offense is or else they would have done it to Obama, right? Because if they know what an impeachable offense is and they chose to ignore it with Obama, like they refused to charge the head of the IRS and Hillary Clinton with anything, then it solidifies my mantra last year… “Dems believe themselves to be superior in all things, including being above the law over Republicans” and they believe that any thought that comes between their 2 ears has to be right and just and everything Republicans say is unjust. EVEN if it’s the exact same words that a Dem may have said years or even months earlier.

We know that BOTH Bill and Hillary Clinton spoke about “pausing” immigration and entry to the U.S. Bill got a standing ovation. Trump said it and followed through with it, and now everyone screams impeachment. That’s a DOUBLE STANDARD!

Not one Democrat was up in arms about the emails from Hillary and the DNC about how they felt about the “Taco Bowl” crowd, making fun of an African America women’s names, or how they were going to use Bernie being Jewish against him in The South. All that from the Party who accepts all people.

Let’s not forget the mantra, “Love Trumps Hate”… except when it doesn’t. The mainstream media has started blaming Trump supporters and Republicans for the violence by stating that if we didn’t support Trump’s policies they wouldn’t HAVE TO riot. Hmmmm? Dems justifying bad behavior by blaming the other side. Nothing new.

Have we had any Democrats come out to denounce the comments by one of the organizers on the Left, an outspoken Democrat, calling for MUCH MORE violence on campuses until they get exactly what they want? Nope. Nothing. Because they want control, not equality!

Let’s talk impeachable offenses that the Dems were willing to let slide. Why? Because it is not about equality, it’s about control!

Mr. Obama ordered the Border Patrol to STOP enforcing immigration laws. Plain and simple. The Border Patrol union leader said morale took a major dip because they were NOT being allowed to do their jobs. Catch and release was a joke. 92% of them never showed up for their hearings. A President signing an Executive Order that flies in the face of the Constitution? THAT’s impeachable!

Mr. Obama decided he could handcuff the second amendment by simply putting out an Executive Order that says the Federal government will decide who is “engaged in the business” of selling firearms under federal law. Apparently the law wasn’t to his liking and since he had no majority in the House BUT a phone and a pen he would deal with it on his own. AND even though many states require you to do a gun transfer at a gun store, Mr. Obama decided he would force private parties to conduct background checks. Now understand that many people are on the U.S.’s no-fly list because they have names that are close to people on a government watch list, including some Senators and Congressman and there is NO easy way to clean it up. They would NOT be allowed to buy a gun. Changing the second amendment by pen and phone, THAT’s impeachable!

Some people are screaming that Trump should be impeached because he is not careful about calling out companies for overcharging the U.S. Did Mr. Obama call out Boeing and push them to basically fire over 1000 employees in their new plant in South Carolina because, wait for it… it was non-union? Why yes he did! I guess that would be impeachable under the new Democrat Constitutional rules.

What about the ACA fiasco? Mr. Obama lied about keeping your doctor and healthcare plan. And then one of the chief architects of the plan said they knew it all along. They impeached Nixon for lying… I guess Obama gets a pass.

Remember Inspector General Gerald Walpin? He was fired back in 2009 when he accused the Mayor Kevin Johnson of misusing AmeriCorps funding to fund political activities, many like him are in jail. Johnson’s get out of jail free card? He was a MAJOR league Obama supporter. Impeachable?

How many “green” companies did Obama and his administration fight for to get grant and loan money? Several had been turned down but were then miraculously approved and then went under! Mr. Obama stumped for them went to their openings and so on!

In 2012, the Obama Administration wanted to ban children on a farm from doing various “adult type” of activities. Driving tractors, using hay bailers… really. Just because Obama needs kneepads to ride a bike doesn’t mean these kids can’t handle this equipment. Ever see a 16 year old drive a car? Maybe we need to ban that.

The Ambassadorship to the Netherlands went to an Obama bundler who raised over 500k for him in the 2012 election. The man knew NOTHING about the Netherlands!

The President can’t pick and choose what laws and what parts of the law to enforce. However, the Executive Order process does give him the right to temporarily tweak a law until Congress fixes it or until a situation is over. You know, like FDR did in WWII and Jimmy Carter did during the IRAN hostage crisis. It doesn’t allow them to create their own dictatorial regime.

If Trump should be impeached for taking constitutional action, then Obama should be on his 1st year of a 20-year sentence for what he did to this country.

Next week… the mess Obama left our military in and our relationships with the Middle East and Europe.

Until then … Long Live Nancy Pelosi!