URGENT: VOTE For The Herut Slate In The World Zionist Congress Election NOW! 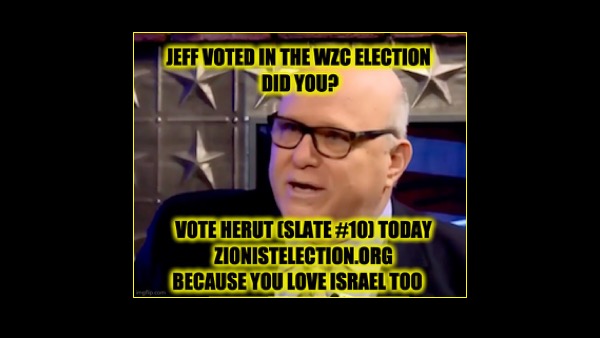 Next Wednesday, March 11th voting for the U.S. Delegation for the 38th World Zionist Congress (WZC) ends. Yours truly, Jeff Dunetz (The Lid) is honored to be running to represent American Jewish Zionists as part of the Herut Slate. (Slate #10)  Why am I running on the Herut Slate? Because I believe the Herut slate is by far the best of the 15 slates running. For the WZC Election…Voters do no select individual people; instead, they vote for one of the fifteen candidate slates.

I am running because as patriotic American, a Jew whose faith is important to him, and as a lover of the state of Israel who recognizes that the survival of Israel is vital to the future of the United States and the Jewish people.  Participating as part of the WZC, and particularly Herut is a way to help guarantee those futures. Please help us by voting Herut. e\\#10

The Herut Slate is comprised of 108 dedicated, Unapologetic Zionists representing every sector of American Jewry –women and men, secular to religious Zionists, and all in between. The Herut slate include Jewish leaders, Israel activists, former Lone Soldiers, journalists and authors, rabbis from all denominations, and one bald blogger known as The Lid  Herut is actively engaged in fighting antisemitism, anti-Israel and BDS activity on college campuses; training Jews and Jewish communities on security; assisting IDF and Lone Soldiers; protecting the integrity and sovereignty of all of Israel, including Judea and Samaria.

What first impressed me about Herut was when a rash of horrible anti-Semitic incidents struck the New York City area they immediately created a Synagogue Security Kit which they offered free to congregations across America. Herut acted!

I am hoping you will vote Herut today and include others in your family (parents, kids, and siblings, friends). Herut is slate #10.

Allow me to tell you a bit about the WZC. This is the same Congress, the “Parliament of the Jewish People,” started by Theodor Herzl in 1897.  Now it convenes every 5 years in Jerusalem. The WZC oversees a budget of $1billion a year for the five years until the next Congress. Its members will vote on the allocation of funds and programming in Israel and throughout the world.

The WZC is the overall supreme ideological and policy-making body of the Zionist movement. The delegates to the WZC determine the leadership and influence the policies of some of the most essential Zionist organizations worldwide. They include the World Zionist Organization (WZO), the Jewish Agency for Israel (JAFI), Jewish National Fund-Keren Kayemet LeIsrael (JNF) and Keren Hayesod – which together allocate nearly $1 billion annually in funding in support of Israel and Jewish communities around the world.

Herut has committed to present, as our first resolution in this WZC, the immediate allocation of funds and personnel for training American (and European) synagogues and other Jewish institutions on security. Help Herut make this happen!!

Voting is overseen and conducted by the American Zionist Movement. They collect a fee of $7.50 per vote, $5.00 for people 18-25. Only 2 votes are permitted on a credit card (but each of the two needs to be different people)

Herut follows the goals of the great Zionist philosopher Ze’ev Jabotinsky who is often quoted here on The Lid. Jabotinsky inspired the masses—especially the downtrodden masses of  Eastern Europe. He exhorted the Jews of Russia and Poland to take pride in their heritage, to recognize that violent anti-Semitism was on the horizon, and to prepare to make aliyah to the Land of Israel.

Herut is fighting to help protect American Jews, strengthen Jewish Zionist Education, and to continue to settle the land of Israel in its entirety, it is up to you to get everyone you know to vote Herut slate #10. For us to stop those who wish to punish and sanction Israel, we must make every effort and leave no stone unturned to get everyone to vote for Herut slate #10.

Five Billion dollars in funding is in jeopardy! These funds can go to Zionist education in the Diaspora and improving the lives of Israelis or could be misspent. It is up to us to empower our leaders to bring these unapologetic Zionist values to American Jewry and to protect the Jewish State of Israel

BTW, did I mention  If You Are American And Jewish Please Click Here And Vote, For Herut: Slate #10?

2020 Herut Platform and Slate (1) by Jeffrey Dunetz on Scribd

Note:  If You Are American And Jewish Please Click Here And Vote, For Herut: Slate #10?