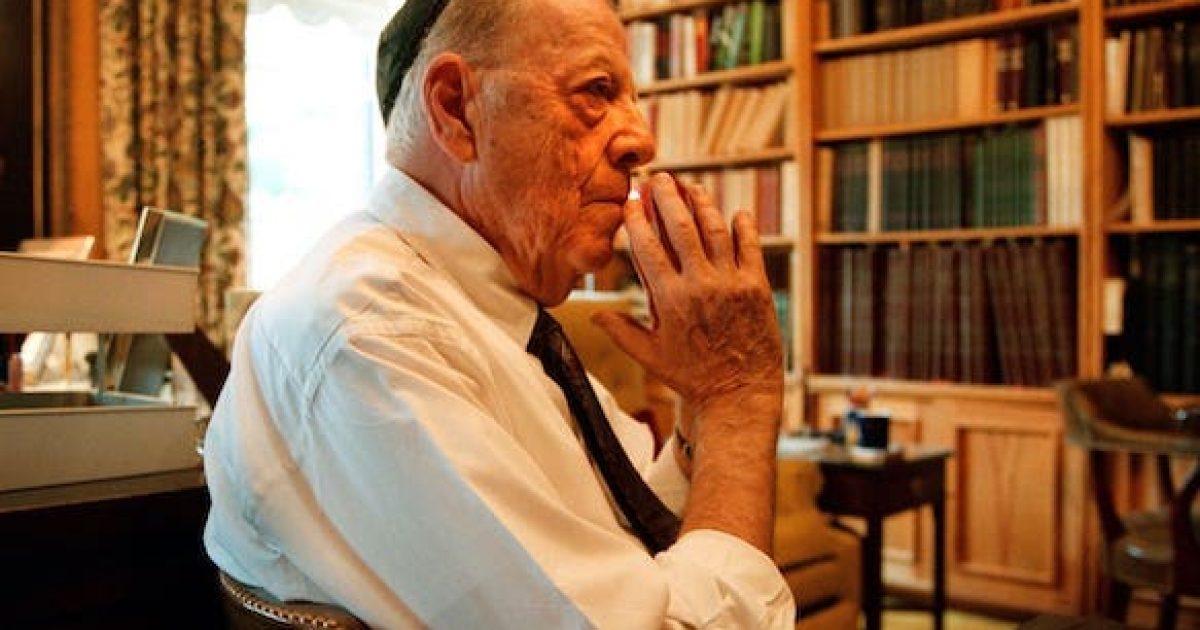 Herman Wouk, the famed novelist who first became a household name for his 1951 Pulitzer Prize-winning The Caine Mutiny died last week nearly 70 years after achieving fame. Besides his long career as a writer, he was also a lifelong Zionist.

This fact of Wouk’s love affair with the State of Israel has been entirely absent from the many articles celebrating his literary career and marking his passing, less than two weeks before what would have been his 104th birthday.

In this small space, we will attempt to rectify that.

Again and again — from his 1959 first non-fiction work This is My God: The Jewish Way of Life through his pair of books about modern Israel The Hope (1993) and The Glory (1994) until his second nonfiction book, published in 2000, The Will to Live On: This is Our Heritage — Wouk focused much of his literary abilities on Israel.

Perhaps no line in any of his books demonstrates his love of Israel more than this one from This is My God:

“The first time I saw the lights of the (Israeli) airport in the dusk from the descending plane, I experienced a sense of awe that I do not expect to know again in this life.”

Wouk, an Orthodox Jew, synthesized his love of Torah with his love of the reborn Jewish state.

And his view of Zionism is also clearly laid out in This is My God: “Zionism is a single long action of lifesaving, of snatching great masses of people out of the path of sure extinction.”

Forty years later in The Will to Live On Wouk, as he inter-wove Jewish history and shared stories of his personal interaction with David Ben-Gurion, Yitzhak Rabin, and other leading Israeli generals and politicians, showed that his love of Israel was clearly undiminished. “The resurgence of Jewry in the Holy Land is nothing but phenomenal,” he wrote.

Wouk had been a U.S. Naval officer during World War Two, and his love of the Israeli military and respect for its accomplishments was a large part of his Israel novels The Hope and The Glory.

Those two books can be juxtaposed with his pair of famous World War Two novels The Winds of War (1971) and War and Remembrance (1978). In his Israel novels, the heroine Natalie Jastrow undergoes a long and tortured journey from American Jewish girl to Holocaust victim to Zionist.

Herman Wouk penned the introduction to the 1980 English version of Self Portrait of a Hero: The Letters of Jonathan Netanyahu. Yoni’s brothers, Benjamin and Iddo Netanyahu, put together the book. “My parents like his were Zionists,” writes Wouk.

Later in the introduction, he explains his connection to Israel. “Like most American Jews we believe in Israel and support it, buy Israel Bonds, make frequent trips there; I give speeches for Israeli causes and so forth,” and then relates how the book allowed him to better understand his own son’s desire to make his home in the modern Jewish state.

The Washington Post, The New York Times, The Jerusalem Post as well as wire services and other newspapers all managed to leave Zionism out of their summations of Wouk’s life. Whether deliberate or not, this missing piece of his life surely matters as one simply cannot understand Wouk without realizing the central place Zionism occupied in his life, no less than his love of Torah and his deep faith.

Wouk’s passion for the well-being of his fellow Jews and for Israel should serve as a reminder to American Jews of how the Greatest Generation also bore witness to the horrors of the Holocaust and the rebirth of Israel. Those who reflected on what they saw were forever changed. Wouk loved Israel and America, and we should emulate that attachment to the Land of the Free as well as to the reborn Jewish State.

Postscript: Self Portrait of a Hero is a must read; it contains Yoni Netanyahu’s letters to family and friends from 1963 when he first entered high school in the Philadelphia suburbs to just days before the rescue of hostages at Entebbe. His intellect, patriotism, compassion, dedication to duty, and leadership are all on full display, amplifying the loss of someone who had just turned 30. The book had a profound effect on Wouk, and if you have not read it, do yourself a favor and read it, and you too will be forever changed by it.