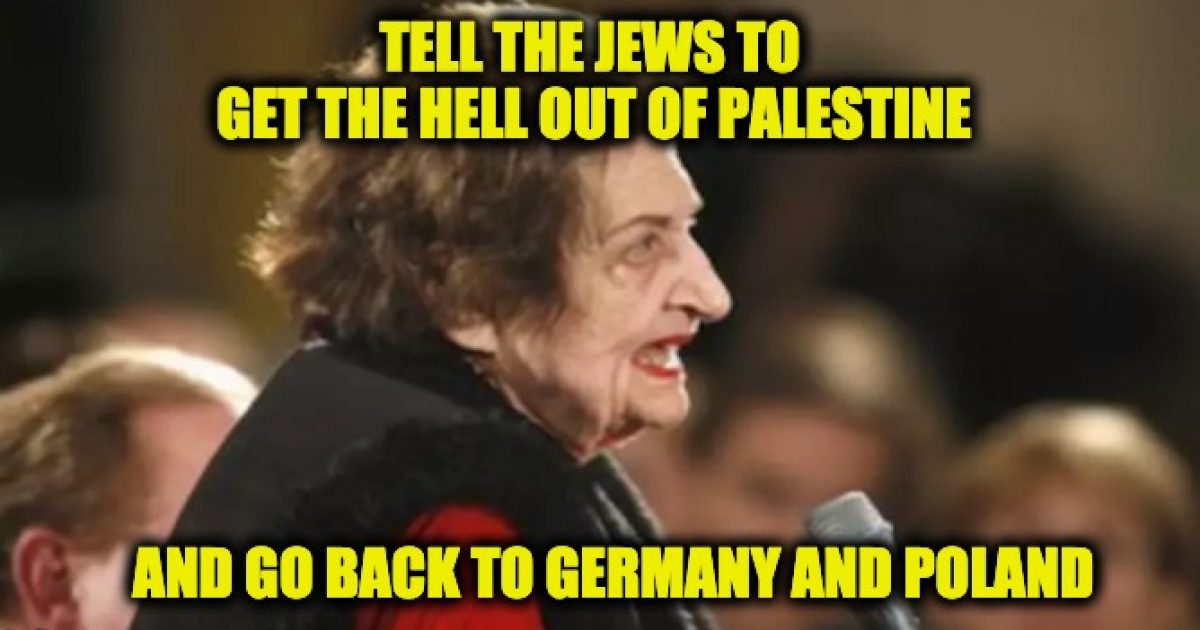 There were two valuable lessons I learned in the process of “outing” Helen Thomas as a hater nine years ago today. The first was the importance of making sure what I post is accurate because it can ruin someone’s career (what I posted was accurate and it ruined Ms. Thomas’ career). The other lesson is the mainstream media will do anything they can to avoid talking about Antisemitism. A lesson repeated by the media in recent times as the MSM downplays the Jew-hatred being spewed by some members of the Democratic Party.

My “association” with Helen Thomas began Friday, June 4th, 2010 when a friend Rabbi David Nesenoff sent me a video which contained a short explosive interview he had conducted with Helen Thomas at the White House on Jewish Heritage Day. The tape displayed the veteran White House correspondent telling the Jews to go face another Holocaust, which was probably one of the more pleasant things Thomas publicly said about Jews during the last three years of her life. Although the video exposed her as an anti-Semite, the media doesn’t believe in pointing out Jew-hatred, so instead, they described her statement the more convenient, anti-Israel.

David asked me if there was anything I could do with the video. He explained he’d already offered it to the mainstream media, Newsday, and even to The Jewish Week, a weekly progressive newspaper for the Jewish community. But no one wanted to take on Ms. Thomas who at the time was seen as the dean of the White House press corps and very popular with her press corps colleagues.

Taking up David’s challenge, I guarantee the video would have a half a million hits before he turned on the computer again after the Sabbath (I was wrong–it was over 750 thousand).

I quickly wrote it up for The Lid, Breitbart’s Big Journalism, and sent it to Scott Baker (who at the time was running Breitbart TV). To help the posts gain some traction, I sent out tweets and emails to most of the larger website sites. Before leaving on a five-hour car ride to my brother’s house for the weekend, the video was posted on the all the Breitbart “Big” sites and as a banner Drudge headline.

Turning on the TV news five hours later, the same Helen Thomas video they had rejected a few days earlier was dominating the headlines of the mainstream media.

Two days later I followed up by unsuccessfully urging that Ms.Thomas keep her job, explaining that Helen Thomas was merely a symptom of the problem, not the disease—media acceptance of Antisemitism. Firing her would be like treating Ebola with a band-aid.

What I hadn’t counted on after the story broke, was how much the mainstream media loved and wanted to protect Ms. Thomas. Within a few days of the original post, David was being slandered by Mediaite, Juan Cole was accusing me of selectively editing the video (and other affronts to Ms. Thomas) causing Helen Thomas to resign under fire, and the hate mail piled up on my old site and in my email.

Some in the WH press corps told me off the record that they weren’t surprised by her comments as they have heard her make similar ones before. Others who considered her a mentor were very angry I had the nerve, to tell the truth about Thomas.

In the years afterward Thomas, unencumbered by a “front line” media job made new anti-Semitic comments, but her colleagues in the media protected her by claiming her slanders including the first one, were political, not hateful. They claim that she wasn’t anti-Semitic, but merely anti-Israel—a dangerous affront to the truth. For two years after Thomas’ hatred was exposed, Michael Calderone wrote at the Huffington Post:

Charles Lewis former investigative producer for ABC News and the CBS’s 60 Minutes recently created a new website to honor “independent” journalists. One of the site’s initial honorees was Ms. Thomas. In their chronology of her career, the site lied about what she said:

Saying the Jews have no right to a homeland was anti-Semitic, telling them to go back to the countries of the Holocaust upped the Jew-hatred ante. But the mainstream media continues to whitewash Ms. Thomas’ statement as about the “Israel- Palestinian conflict.” That is a lie.

If making false and slanderous statements regarding Israel was a crime that leads to termination, the NY Times newsroom would be empty, Peter Jennings would have been sent home by ABC to live with his former lover/Palestinian Authority Official Hanan Ashrawi. Heck even in Israel you don’t get fired for being anti-Israel (have you ever read the Israeli paper Ha’aretz?).

Proving that you can’t teach an old dog new tricks, on December 2nd, almost six months to the day the original video went viral, another Lid scoop reported that Helen Thomas spoke at an anti-Arab bias workshop in Dearborn Michigan spewing more Antisemitism. At the anti-bias conference, Thomas explained that she absolutely stood by her ugly comments about Jews made earlier this year and added the anti-Semitic canard that Zionists [Jews] control U.S. foreign policy and other American institutions

At 12/2/10 at the conference, Thomas was asked about her statements on that video that destroyed her career.

Alluding to the anti-Semitic canard that Jews control the media, Thomas said:

That was the nicest thing Thomas said all night. She blamed anti-Arab prejudice on the Jews, launching into an anti-Semitic tirade about how those wealthy Jews control America

In a speech that drew a standing ovation, Thomas claimed the rich Jews own Congress, Hollywood, and Wall Street:


After her stint at the anti-Arab bias conference, Thomas kept spewing hatred. In March 2011 Playboy interviewed her.

When asked by the interviewer if she had a personal antipathy toward Jews themselves, Thomas labeled the Jews as Arab-haters and denied they had a historical connection to the Jewish State. She made some renewed claims about the worldwide “Jewish” conspiracy a little later in the interview.

Helen Thomas was a trailblazer. When it comes to the White House press corps, she broke the “glass ceiling,’  she mentored new reporters, and always pressed Presidents and their Press Secretaries for honest answers to difficult questions.

A Journalist’s job is telling the truth. While the mainstream media whitewashed Ms.Thomas’ “go back to Germany” statement as about the “Israel- Palestinian conflict.” That’s a lie. And if the original video first published nine years ago didn’t prove it, her comments in Dearborn and to Playboy should be enough corroboration to substantiate what she meant.

When Roger Ailes passed away earlier this year, the mainstream media focused on the scandal that cost him his position running Fox News.  When  Helen Thomas died on July 20th, 2013  she was celebrated by the mainstream media as the trailblazer she was. However, in telling her story, the media continues to ignore and/or falsified her entire story. Her career was not ruined by an anti-Israel comment, her career was ruined because she was a vicious anti-Semite–and that hatred began to be exposed on this site nine years ago.

The media is still spinning the truth about Helen Thomas.  In November 2018 the Washington Post told a Helen Thomas half-truth ignoring where she said the Jews should go, and her post-firing Antisemitism:

In 1975, Thomas became the first female president of the White House Correspondents’ Association. She quit UPI in 2000 and soon joined the Hearst newspapers. Her long career abruptly ended under a cloud of controversy in 2010 after Thomas, who was of Lebanese descent, said Jews should leave Palestinian territories.

Have you noticed that the MSM ignored Barack Obama’s Antisemitism? How they Ignored the Jew-hatred coming from the Democratic party? Or the Woman’s March?  Even when Rep Ilhan Omar made her series of anti-Semitic statements, accusing American Jews of dual loyalty or that wealthy Jews control foreign policy through AIPAC, the media described the statement as “what some say is anti-Semitic.” The dual loyalty canard has been resulting in dead Jews since way before they were called Jews. The Jews controlling government policy is almost as old.

When Virginia Gov. Ralph Northam was accused of posing in blackface for his medical school yearbook, the media didn’t report that “some say” blackface is racist–it is racist. Helen Thomas’ statements beginning on June 4, 2010, through her death in 2013 weren’t anti-Israel they were anti-Semitic.  The mainstream media ignores her hatred as they try to downplay Democratic Party anti-Semitism today.