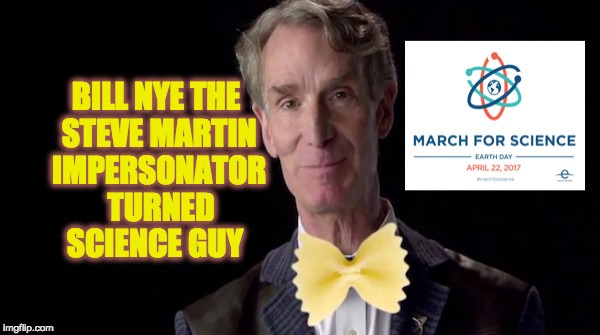 The March for Science is another one of those liberal anti-Trump rallies. This one is being organized by scientists who believe the Trump administration is planning on reversing every scientific discovery since Copernicus. Originally they chose Bill Nye the fraudulent science guy as their public face, but there was an uprising against the decision because he’s a white guy.

The March for Life is a protest against what liberal scientists believe is President Trump’s anti-Science agenda:

President Donald Trump’s administration has fulfilled his campaign rhetoric when it comes to waging war on science, from erasing WhiteHouse.gov references to climate change on the day of his inauguration, to banning the term “climate change” at the Department of Energy’s climate office, to proposing massive cuts to medical research to fund a new U.S.-Mexico border wall.

On April 22, a global March for Science will see 400 events in 37 countries, with a massive march in Washington, D.C. Organizers also announced Thursday that prominent scientists Bill Nye, Lydia Villa-Komaroff, and Mona Hanna-Attisha will be honorary co-chairs of the March for Science

One would think that if the March For Science organizers would have problems with Bill Nye as their public face it would be because he is not now, nor has he ever been a real science guy. Just a Steve Martin impersonator who became a sketch comedy guy.

They were supposed to have gotten their internal issues under control, but this week a new fight broke out over whether Bill Nye the Science Guy, the former children’s television host who considers himself the leader of the “pro-science movement” should lead the protest. The problem? Nye is a “white male.”

Nye, who is not, in fact, a scientist, except on television (he’s an engineer by trade), was slated to be the March’s chair, and an announcement was made last week. But organizers quickly panicked that having Nye at the forefront of the event meant they might be substantiating the idea that scientists are only old white men.

While Nye is an old white man, he is not a scientist. He has a B.S. in mechanical engineering from Cornell University, and worked at Boeing in the mechanical engineering department. His entry into TV was not because of any science expertise but because he won a Steve Martin look-alike contest and began moonlight as a stand-up comic by night. Eventually he quit Boeing and became a comedy writer and performer on a sketch comedy television show in Seattle, Washington, called Almost Live! The host of the show, Ross Shafer, suggested he do some scientific demonstrations in a six-minute segment, and take on the nickname “The Science Guy”. That’s right the Science Guy persona began in a comedy sketch and now he’s joke. In other words, Nye’s qualifications as a  scientist are based on the fact that he looked like Steve Martin and did comedy about science. If he looked like Rodney Dangerfield, Nye might still be working as a mechanical engineer and have some respect.

That’s the person the March for Science picked to be its public face.

To round out the March’s public face, then, the people in charge were forced to add two women of color as Nye’s co-chairs, “to put up a picture of science that did not just fit the white male image.”

For his part, Nye just seemed sort of confused about the whole thing, telling BuzzFeed, “I was born a dorky white guy who became an engineer. I’m playing the hand I was dealt. We can’t—this march can’t solve every problem all at once.”

Organizers insist that “intersectionality” and “diversity” must be part of the march because science seeks to “improve communities” and one way to do that is to advocate for the marginalized and oppressed.

Unfortunately, it also makes the March as much about actual science as Bill Nye himself.

When he is not pushing the global warming or telling Jews to be more neighborly Nye tries to teach people who the Bible is false. In the past Nye has created videos explaining why he believed that creationism is bad for children, explained that the Biblical story of Noah’s Ark was fiction, amongst other attacks on people’s faith.

So it makes total sense that Bill Nye would be involved with a scientific movement with too many goals to have any meaning, but what doesn’t make sense is that the March for Science would want this phony old white guy as its public face to begin with.