George Soros Is Aiding Illegals Sneaking Into The US

He Truly Is The Evil Dude 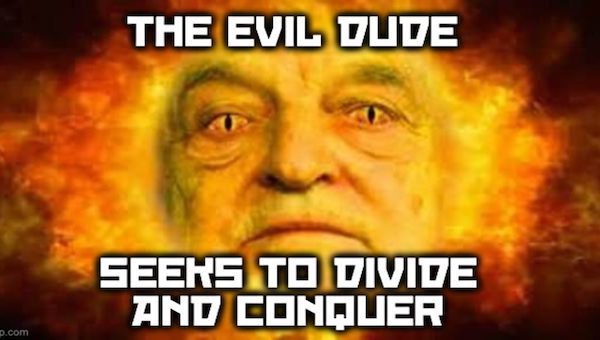 He truly is the Evil Dude

Before we get into the meat of this post, allow us to point out that every year or so, someone tells the truth about Billionaire George Soros and gets accused of pushing Antisemitism. They ignore the fact that George Soros is a real-life Dr. Evil (more about that later). The only difference is that he’s more dangerous and not funny. In fact, he is scary. Soros disrupted Democracy and Capitalism across the world. But when people criticize the Evil Dude, they are met with liberal claims of Antisemitism. As someone involved in fighting Antisemitism, I can assure you that Soros’ critics are not anti-Semitic, but Soros is.
vvvv

Analysis of spending by George Soros and American corporations, including American Express, shows that millions are being spent to aid illegal aliens into the U.S.A.

Thanks to Joe Biden’s failures, more than a million illegals have flooded across our border in the last year, including more than 8,000 a day in Texas.

But these illegals are not just coming here with empty pockets and high ambitions of breaking our laws and stealing from us all. No, they are being funded by enemies of this country.

Per the Austin Journal:

These illegal aliens are financially supported here both by U.S. taxpayers and a group of pro-“open borders” non-profits backed by political activists like Hungarian billionaire George Soros and blue chip American companies like American Express, according to an analysis of Internal Revenue Service filings by the Austin Journal.

Soros and American Express are both major donors to the American Immigration Council (AIC), the National Immigration Law Center and Immigration Equality, the group’s 990 filings show.

The U.S. Department of Homeland Security has partnered with the three groups to help illegal aliens obtain visas to stay in the United States by claiming they have been victims of a crime, which entitles some aliens to special treatment by immigration officials.

Aside from George Soros, one of the biggest financial supporters of AIC is American Express, the Journal noted.

Soros has tried to, or successfully ruin the economy of many different countries.

Soros is often referred to as the “man who broke the bank of England” in the 1992 Sterling crisis. During that crisis, he made $1 billion in one day at the expense of British taxpayers and drove Britain into a recession as many businesses failed and the housing market crashed.

In 2002 Soros was convicted by a French court of inside trading relating to the sale of the French bank Société Générale. Soros was accused of acting on insider information from the French central bank and the German Bundesbank. The insider information was those banks would not support the British pound, despite a pre-existing arrangement. Given that Mr. Soros is no fool, the British believe it is highly doubtful he would have made such a colossal bet without knowing with high certainty that the Germans would not reduce their interest rates.

Per the Daily Mail in 2010, Soros was at the center of a hedge fund plot to cash in on the fall of the Euro.

Soros’ money has been banned from Hungary. He is persona-non-grata in much of Eastern Europe because he’s used his money to corrupt the political processes in more than a handful of foreign nations. As the 2018 election period in Hungry started,  the government used vast amounts of large public posters with the photo of Soros, along with continuous support from government-owned countrywide media. All because Soros was encouraging and aiding illegal immigration.

In 2017 Macedonia “declared war” on Soros as the financier and his minions in USAID (money allocated under Obama)   financed a left-wing agenda to divide the nation and bring a socialist-Muslim coalition to power. Early March of that year saw tens of thousands of Macedonians holding peaceful rallies for national unity, an end to chaos-creating Soros/USAID largess, and the removal of the U.S. Ambassador. One of the most common posters said, “No Soros Government.”

One of the reasons American liberals rush to defend Soros is that he is a significant funder of the party and its candidates. . Per open secrets, Soros uses his personal funds to donate to Democrats and their party. Still, the most significant volume of cash comes from the organizations he runs, such as Soros Fund Management or Open Society Foundation. In the 2020 election, Soros broke his own record ‘by pouring more than $50 million into Democratic campaigns and causes just months before the November election.”

And for those who aren’t happy with the Attorneys General across the country who have no desire to prosecute criminals, you can thank the Soros campaign to elect far-left prosecutors.

The most ironic part of the pro-Soros cabal who claim that criticism of the Evil Dude is caused by Antisemitism understand that  Despite his Jewish birth, Soros is a Jew-hating Jew (I don’t use the term “self-hating” because most people in that category like themselves). A dozen years I discovered Soros was funding the anti-Israel, pro-BDS organization, J Street. The Evil Dude supports anti-Semitic causes around the globe. Here are some examples as reported by NGO Monitor.

The bottom line is that Soros is an anti-Semite who finds a way to ruin countries worldwide. Now he is funding Illegal aliens to sneak across the southern border into the United States.

Part of this post was written by Warner Todd Huston and appeared on iPatriot.

He truly is the Evil Dude
https://lidblog.com/