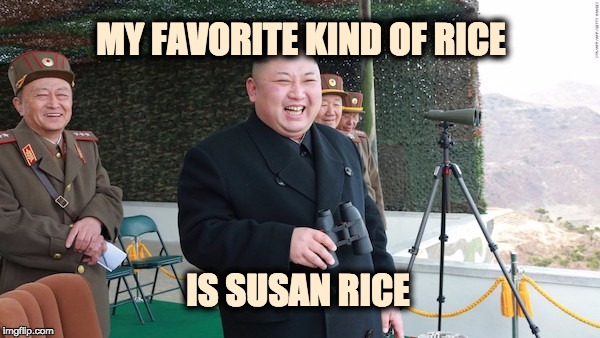 Former president Obama’s National Security Adviser, Susan Rice feels says the U.S. should just lie back and accept a nuclear North Korea.  Which when one thinks about it, is not surprising from a person who helped push through the Iran nuke deal, by promising things such as under the deal there was no way for Iran to avoid inspections, but neglected to mention that Iran would be inspecting itself (which I have heard makes one grow hair on their palms and lose their eyesight).

Perhaps to make American comfortable about Iran having nukes in the near future or to deflect from the investigation of her unmasking of team trump, Rice made an irresponsible statement about North Korean nukes:

“’History shows that we can, if we must, tolerate nuclear weapons in North Korea — the same way we tolerated the far greater threat of thousands of Soviet nuclear weapons during the Cold War,’ she wrote in a New York Times op-ed, criticizing the president’s ‘fire and fury’ rhetoric in response to the escalating tensions between the two countries.

“Rice complained that Trump’s rhetoric was “unprecedented and especially dangerous” and that America would have to be cautious about its response to Pyongyang.

“She defended Obama’s actions in response to North Korea, insisting that his administration put them ‘on edge’ by conducting joint military exercises with South Korea and introducing more economic sanctions.”

Now granted we are talking about a woman with a reputation of lying about things like a video causing the Benghazi attack and was comfortable with Iran using its ill-gotten gains from the nuclear deal to fund terrorism, but allow me to ask, is Susan Rice freaking nuts???!!!!!

Let’s say for a minute you are arguing with your wacko next-door-neighbor whose politics are somewhere to the left of Bernie Sanders. And let’s say after a particularly bad political argument that neighbor threatens to blow your head off. Now if that same neighbor procures a ground-to-ground shoulder-fired missile weapon, along with extra missiles. Would you accept the fact that your loony tunes liberal neighbor who wants to blow your head off,  illegally owns what is commonly known as a bazooka? Anyone who is comfortable with that scenario needs to watch a few episodes of  ‘Fear Thy Neighbor” on the discovery channel.

But this isn’t TV this is real life. In North Korea, we have a, mentally disturbed tyrant with a crappy haircut, who despite his nuclear ambitions has been appeased by the United States ever since he took power from his late father almost six-year years ago.  His father Kim Jung Il who had similar nuclear ambitions was allowed to ignore a nuclear deal, beginning practically the day after he agreed to it with former President Bubba Clinton.

Now the sanity-challenged Kim Jung Un has announced he’s going show his missile prowess by sending mid-range missiles to within 30 miles of Guam which is part of the United States. That’s the biggest threat to that Island since Georgia Congressman Hank Johnson worried that all the marines living there would tip the place over.

But it’s okay according to Susan Rice, we should all be comfortable with that nut-job having the nuclear weapons and the missiles to hit Guam, Hawaii, Alaska, or the lower 48.  Maybe it’s not Kim Jung Un who’s the nut job. Maybe it’s Susan Rice.