If Harvey Weinstein or Bill Cosby Needed To Be Outed, Why Not Bubba Clinton? 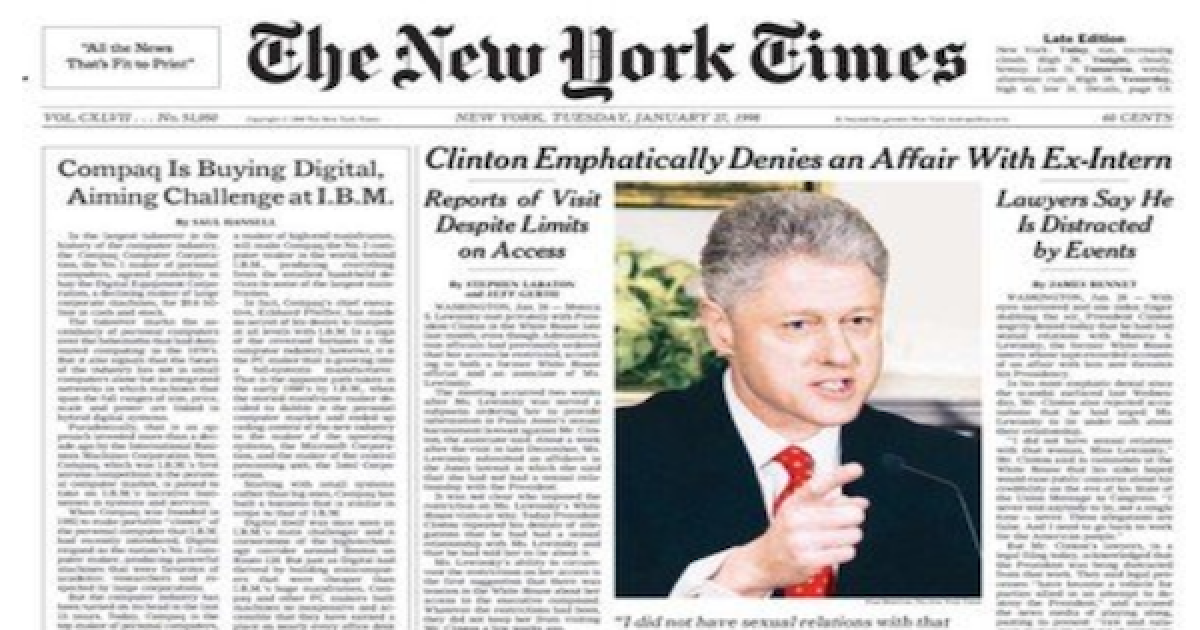 The mainstream media has been all over the Harvey Weinstein sexual harassment/rape story and justifiably so, they were also all over the Bill Cosby charges and the salacious reports about Bill O’Reilly and Roger Ailes. In fact, over recent weeks the MSM has found dozens of people who have groped,  sexually harassed, or sexually assaulted women. However, they’ve ignored one person from their investigations; former President Bubba Clinton.

It’s almost understandable that the MSM avoided Bubba’s dalliances during the 2016 campaign, they didn’t think it should be an issue to hurt his wife who they wanted to be the next POTUS. But today the media is reporting about all the people whose silence might have enabled the people above to continue their war on women, they should have reported about Hillary’s enabling, or the times, the former Secretary of State was cruel to the woman whose sexual contact with her husband.

There are at least 21 Bubba “incidents” that I could find. Some of the women claimed to have been raped, some groped, others were consensual affairs, but many of the “consensual ” affairs weren’t really…after all he was a person of authority manipulating a vulnerable person into bed.The vast majority are known by name, but a few wished to remain anonymous. And then there are the ones who are still fearful of the wrath of Hillary Clinton—years later. Ms. Clinton’s wrath isn’t generated by anger over her husband’s dalliances, but because she feared one of these 21 women would ruin her political career.

I say 21+ because if the media covered the Former President’s “dalliances” many more would begin to speak up.

Below are the members of Bubba’s 21+ Club.

Juanita Broaddrick who claims she was raped by Bill Clinton and Hillary tried to silence her. “she says, he got her onto the bed, held her down forcibly and bit her lips. The sexual entry itself was not without some pain, she recalls, because of her stiffness and resistance. When it was over, she says, he looked down at her and said not to worry, he was sterile–he had had mumps when he was a child.”

Becky Brown was a nanny to Chelsea Clinton and the wife of L.D. Brown, an Arkansas state trooper. She claims he sexually harassed her in the mid-1980s. L.D. Brown made the allegation public in his 1999 book, “Crossfire: Witness in the Clinton Investigation,” writing, “Becky had been babysitting Chelsea and had already put her to bed. Bill, after getting a beer, found Becky watching television in the upstairs part of the Mansion. He slouched down next to Becky and offered her a beer. Incredibly, he began his ‘I’m so bad’ routine with Becky! I had seen him use it time and time again to get a woman to comfort him – comforting which he then manipulated into eventual sex. Becky got out of there in a hurry.” (L.D. Brown)

Helen Dowdy, the wife of Hillary Clinton’s cousin, claims she was groped by Bill Clinton at a wedding in 1986. She told Jerry Oppenheimer, the author of State of a Union: Inside the Complex Marriage of Bill and Hillary Clinton

Gennifer Flowers revealed in 1992 that she had a 12-year sexual relationship with former U.S. President Bill Clinton. Clinton denied the affair at the time. However, In January 1998, as part of Paula Jones’ case, Bubba testified under oath that he had sexual relations with Flowers. In 2016 Flowers stated that Hillary is an enabler of Bill Clinton’s affairs. In an ABC News interview, during the Bubba’s first POTUS run, Hillary Clinton defender of woman-kind called Flowers “some failed cabaret singer who doesn’t even have much of a résumé to fall back on.” She told Esquire magazine in 1992 that if she had the chance to cross-examine Flowers, “I mean, I would crucify her.”

Connie Hamzy, In 1991, Hamzy was briefly in the news due to her claim that, in 1984, she had been approached by an Arkansas state trooper on behalf of Bill Clinton. She claimed that she and Clinton had looked for “a place where they could have some privacy for an assignation, but couldn’t find one. At least it was consensual.  George Stephanopoulos wrote in his memoir that Hillary said of Connie Hamzy in 1991, “We have to destroy her story.”

Regina Blakely Hopper was a Miss Arkansas pageant winner in 1983,  L.D. Brown, a former Arkansas state trooper, testified under oath that Ms. Hopper used to go to Governor’s Mansion to have sex with then governor Bill Clinton

Dorothy Kyle knows the Clintons well, having met “Billy” when she was just 11 years old, and he was “12, going on 13. We met on the Belvedere Country Club golf course in Hot Springs,” she recalled. “Forget about his stories of growing up in poverty, okay? Forget that. We met on the golf course. We were friends in high school. Kyle began sleeping with Bill Clinton after high school and their affair didn’t end until he moved to the White House” He was married, I was married, during part of this,” Kyle said. “I have repented. I discovered I was a sex addict. I got treatment. I told Billy about the problem. I warned him, I begged him, to get help for his sex addiction problem.” Ms. Kyle claims that Hillary tried to destroy her.

Sally Miller had a raucous three-month affair with Bill Clinton years before he became the 42nd President of the United States, and that relationship has her fearing for her life today. In fact, Miller is so fearful of retribution from the Clinton family that she sleeps with a loaded weapon within arms reach.  Beginning in 1992 she started to be harassed, she claims, with a sinister invitation from a Clinton operative who offered Miller a lucrative federal job if she promised to be a ‘good little girl’ – an offer she declined. ‘They said ‘if you don’t take the job, we know where you go running and we’ll break your pretty little legs,” Miller claims. ‘They said life isn’t going to be fun anymore – and they meant it.’ Miller has since written a book about her time with Bubba. She claims that since news of her memoir broke she has fallen victim to stalking and late night anonymous phone calls. Miller worries that the Clintons may look to silence her through violence and has gone so far as to tell people that if she dies suddenly… it was the Clinton family who had her killed!

In 1972, when he was attending Yale (and dating Hillary) a 22-year-old woman told campus police at Yale University that she was sexually assaulted by Clinton, a law student at the college. No charges were filed, but retired campus policemen contacted by Capitol Hill Blue confirmed the incident. The woman, tracked down by Capitol Hill Blue in 2007, confirmed the incident, but declined to discuss it further and would not give permission to use her name.

Also according to Capitol Hill Blue, “former Arkansas students confirmed that Clinton tried to force himself on them when he was a professor.”

These next  three examples come from the Daily Wire:

In the book, “Uncovering Clinton,: another woman, “the wife of a prominent Democrat” (who remained unnamed), accused Clinton of sexual abuse in 1996. Clinton started getting physical, trying to kiss her, touching her breasts. The woman said she was stunned. She had no idea how to respond. “I’ve never had a man take advantage of me like that” … As Clinton pressed himself on her, she said, she resisted–and finally pushed him away. What happened after that? I asked. Clinton turned away, she said. She hesitated, and she said softly and with apparent discomfort, “I think he finished the job himself.”

Then, of course, there is Monica Lewinsky.  Technically this one was consensual,  but IMHO when a married President of the United States takes advantage of a 21-year-old woman…it’s seems pretty close rape, and once things became public Hillary lead the effort to destroy her.

Campaign narratives written by reporters detailed how Hillary led the team during Bubba’s campaigns  that handled “bimbo eruptions,” digging up personal papers and official records that could be used to undercut the stories told by a series of women. One top aide later recounted Mrs. Clinton’s intent to “destroy” the story of one accuser, while former adviser Dick Morris said Mrs. Clinton engaged in “blackmail” to try to force women to recant their stories.

But none of the above has important for the mainstream media. But if someone like Harvey Weinstein or Bill Cosby needs to be outed…why not Bill Clinton?