Why The Harvard Crimson’s BDS Support Demands Our Attention 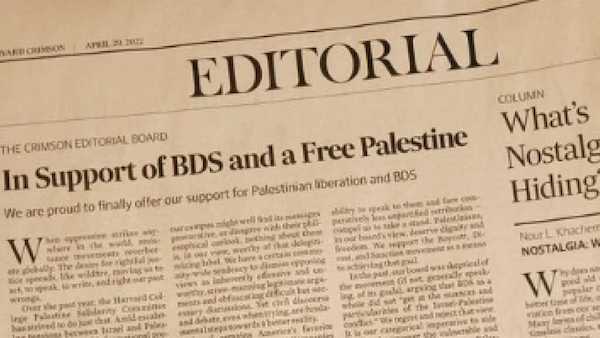 The news that the Harvard Crimson newspaper issued an editorial in support of the BDS campaign to boycott Israel has surprised many because a Crimson editor had been active on social media stating how proud she is as a Jew to have had a part in the publishing of the editorial. We hear a lot about Jewish college students who have become pro-Palestinian. Polls show that younger American Jews are much less connected to Israel than their parents.

How can this trend be explained? Why do so many Jewish 18-year-olds begin their university studies with the pro-Israel sentiments they learned at home, then emerge four years later more sympathetic to the Palestinian cause than to Israel?

At least part of the answer to this question can be found in a recent essay by a retiring professor of Israeli and Middle Eastern history at another of the eight Ivy League institutions, the University of Pennsylvania.

For more than 30 years, Ian Lustick taught about Israel to many members of Penn’s sizeable Jewish student body. The total number of Jewish students who took his courses was at least in the many hundreds, perhaps in the thousands. He lectured to them every day. He assigned their readings. He answered their questions. He organized discussion groups and symposia, and summer trips to Israel. When it came to Israel and the Arabs, Ian Lustick was their authority figure.

Reflecting on his recent retirement (in the latest issue of the Penn Jewish Studies newsletter), Ian Lustick explained what he set out to do in his academic career and how he did it.

When Lustick was a student at Brandeis University in the late 1960s and early 1970s, he writes, he spent an “impactful” semester at the Brandeis program in Israel, known as the Jacob Hiatt Institute. We have a glimpse of that “impact” from an article he wrote at the time (in 1972) for a student newspaper, “The Jewish Radical.” There Lustick urged American Jews to give less money to Israel and instead “channel” some of it to a Hiatt Institute fund to help Palestinian Arabs. He wrote that the “degeneracy” of unnamed “Zionists” had “prevented the Palestinians from disturbing their consciences.” He declared that world Jewry bears “moral responsibility, if not culpability, for the suffering of millions of Palestinian Arabs.”

Returning from Israel to the Brandeis campus, Lustick found that the demands being made by “the movement for Black Studies” on campus “resonated with me.” He referred to the eleven-day takeover of a Brandeis building in 1969 by student militants demanding the creation of an Afro-American Studies department.

At the time, not many American universities had Jewish Studies departments. Apparently, the militants’ takeover inspired Lustick to realize that through Jewish studies programs, he could influence large numbers of young Jews regarding what he called “real problems” such as “discrimination by Israel against Palestinian Arabs.” He recalled proudly that at Brandeis, he and his friends undertook “more sophisticated forms of engagement with Israel than those prevailing at the time.” He says those activities helped create the environment which led to “the founding of Jewish Studies programs around the country, including at Penn,” where he ended up teaching for more than three decades.

In his classes at Penn, Lustick writes, he promoted “an intellectually rigorous approach to the study of Israel and Zionism.” He says his “best teaching” was when he helped students who were “struggling” with the “unsettling discoveries” they made about “Israel-Palestinian relations.” Let’s take a closer look at what he has written and said about Israel over the years to understand what he was undoubtedly saying to his students in a class to inspire those “unsettling discoveries” about Israel.

In 1988, Lustick wrote a book called “For the Land and the Lord.” It was so hostile to Israel that even the left-wing magazine The Reconstructionist complained that “Lustick’s sermonizing reeks of the can’t and dual-standard so frequently applied and misapplied by the West to the Middle East.”

In a 1993 article, Lustick wrote that support for “united Jerusalem” is “a carefully cultivated fetish.” In 1997, he denounced Jewish construction in Jerusalem as “confiscatory, discriminatory and aggressive settlement activities in the Jerusalem area.” At the height of Palestinian Arab terrorism against Israel in 2002, Lustick wrote that Palestinian Arab violence was “probably a necessity” to convince Israel to make more concessions.

Lustick has also compared Israel to the Nazis. He has written that Israeli soldiers who serve in the territories “in the aftermath of the Holocaust” are comparable to soldiers in the past who was infamously “following orders” (2002). He has demanded that Israel apologize to the Palestinian Arabs for committing “injustices” against them, just as Germany apologized to the Jewish people after the Holocaust (2006).

In a 2013 op-ed in the New York Times, Lustick compared Israel to apartheid, South Africa, demanded that Israel surrender its nuclear weapons, and called on Israelis to give up “statist Zionism” and agree to live in a “one-state” with the Palestinian Arabs.

In his most recent book, published in 2019, Lustick claimed that Israel carries out “the continuous mass shooting of Palestinian civilians [in Gaza]…murder[ing] and maim[ing] so many men, women, and children trying to escape from the ghetto within which they have been concentrated.”

This, then, is what Ian Lustick has been teaching Jewish students at Penn for more than thirty years: that degenerate, racist, Nazi-like Israelis are slaughtering Arabs and preventing peace, and therefore the Jewish State should be replaced.

So I ask, which is more likely: that Jewish college students are being seduced by Muslim campus groups, or that they are being gradually influenced by Jewish authority figures such as Ian Lustick, who are in a position to shape their views every day in class?

I’m not accusing Lustick or like-minded Jewish professors at Ivy League universities or elsewhere of being bad Jews or self-haters or traitors. They are entitled to their opinions. And freedom of speech on college campuses ensures their right to teach whatever they want. But parents also have a right to know who is teaching their kids about Israel and decide if they are comfortable with a particular professor’s perspective.

This is not just a matter of concern to individual parents; it also has important implications for our community. The Jewish community needs to take a long, hard look at the role that many Jewish academics have played, and are continuing to play, in influencing Jewish college students to side with the Palestinian Arabs over Israel.

Moshe Phillips is a commentator on Jewish affairs. He was a U.S. delegate to the 38th World Zionist Congress in 2020. The views expressed are his own.