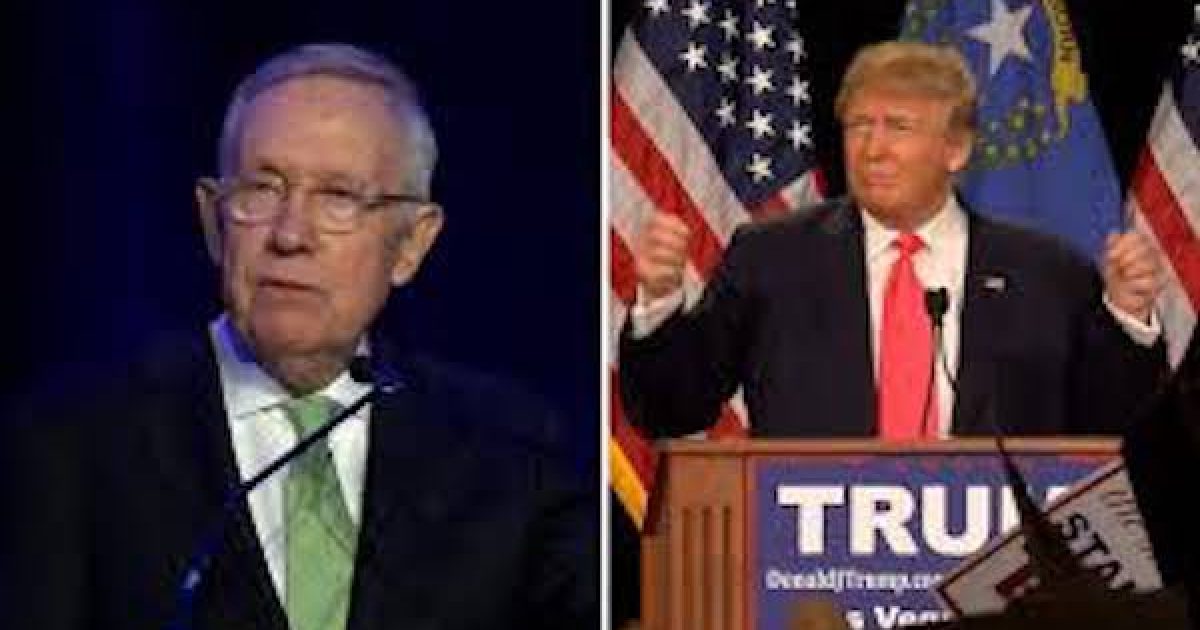 Former Senate Majority Leader Harry Reid may be battling pancreatic cancer, but he hasn’t been too weak to dump on the current president whenever the opportunity arises. In a New York Times interview in January, Reid called Donald Trump “amoral,” explaining, “Amoral is when you shoot someone in the head, it doesn’t make a difference. No conscience.”

On Sunday, he was at it again. Appearing on CNN, he asserted that there was “something wrong” with Trump, adding:

Is there anything that I think that President Trump is doing right? I just have trouble accepting him as a person, and so frankly I don’t see anything he’s doing right. … In hindsight, I wish every day for a George Bush again.

All in all, it was a pretty mean-spirited attack, and not surprisingly Trump responded in kind, tweeting:

Former Senator Harry Reid (he got thrown out) is working hard to put a good spin on his failed career. He led through lies and deception, only to be replaced by another beauty, Cryin’ Chuck Schumer. Some things just never change!

Needless to say, the Left became apoplectic that Trump would go after a dying man. The anti-Trump twitter effort was led by a doctor who published crazy tweets during the Kavanaugh hearings.

This is the lowest of the low. Harry Reid retired from the Senate after a freak exercise accident where he severely injured his face and right eye. Later, he had an abnormal colonoscopy and a follow up MRI that revealed a pancreatic tumor. He is dying of pancreatic cancer.

If the name Eugene, Gu sounds familiar, he is the man behind the most idiotic tweet during the Kavanaugh hearings. Remember when he said anything close to the okay sign was racist

Kavanaugh’s former law clerk Zina Bash is flashing a white power sign behind him during his Senate confirmation hearing. They literally want to bring white supremacy to the Supreme Court. What a national outrage and a disgrace to the rule of law. https://t.co/uQGOpNa6xg

Really? Signaling white supremacy.  To me, it looked as if Dr. Gu’s tweet was indicating that he was having mental issues especially when one considers that Zina Bash the woman Dr. Gu is accusing is Mexican & Jewish.

Others also thought the surgeon’s tweet (or the surgeon himself)was a bit odd:

On the other hand, the sign means something else to the ASL crowd… pic.twitter.com/24VmytT89m

Attack a man on his death bed. It seems to be something you have gotten very good at. PATHETIC!

If Harry Reid is near death and doesn’t want to be attacked, perhaps he shouldn’t attack others. Trump was responding to Reid’s attack.

Former CIA Director, perjurer and Trump hater John Brennan responded to Trump by lauding Reid as a man who used his career in public service to “work selflessly on behalf of” his “fellow citizens”:

You shame yourself & the Office of the Presidency every time you try to smear those who dedicate their lives to public service. These elected officials, like so many others, have worked selflessly on behalf of their fellow citizens, something unfamiliar to one as selfish as you. https://t.co/zqAIofpjSc

It’s an interesting comment to make about a politician who retired abruptly in 2014 after becoming the target of a corruption probe into dirty dealings that extended back decades. As a 2015 summary in Judicial Watch reminds us:

As far back as 2006 Reid was in hot water for violating Senate rules by concealing a seven-figure payoff on a suspicious land deal orchestrated by a longtime friend known for political bribery and mob ties. The influential senator secretly collected a $1.1 million profit on land he hadn’t personally owned for years. To hide the deal, Reid transferred ownership, legal liability and tax consequences to a company owned by a former casino lawyer who has been investigated by federal authorities. Months earlier Red got busted for accepting gifts from a state agency trying to influence him. In that scheme the lawmaker quietly took very expensive ringside boxing tickets from the Nevada Athletic Commission while that state agency was trying to influence him on the sport’s federal regulation.

In 2012 Reid made JW’s corrupt politician list because he was embroiled in an influence-peddling scandal involving a Chinese “green energy” client of a Nevada law firm run by his son Rory. The senator was one of the Nevada projects most prominent advocates, helping recruit the company during a 2011 trip to China and applying his political muscle on its behalf, according to a mainstream news report. Reid’s son was an attorney at the prominent Las Vegas firm that represented the Chinese Company, ENN Energy Group, and helped it locate a 9,000-acre desert site for well below its appraised value from Clark County.

These were just two of many questionable practices Reid should have been made to answer for and would have had Barack Obama’s Justice Department not blocked the case against the senator from moving forward.