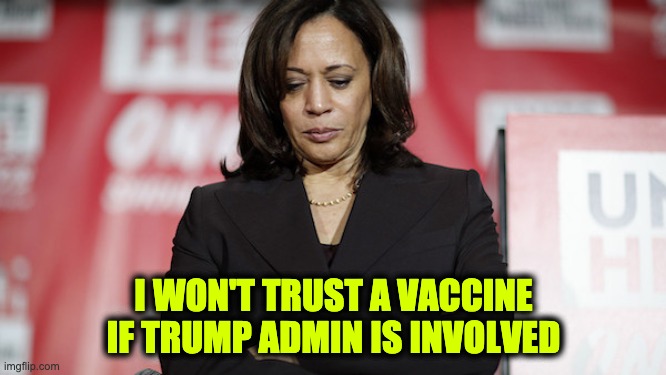 America suffered through eight years of constant lies, corruption, and malfeasance under the Obama/Biden administration. Biden/Harris will be a repeat of the eight years of failure. Their far-left ideology believes that everything serves the state, including human lives. Biden’s V.P. candidate Kamala Harris proved it again by sharing a conspiracy theory about the China Virus vaccines that are already in phase three final testing.   Kamala Harris suggested she wouldn’t trust a coronavirus vaccine developed during the Trump administration because she doesn’t trust the president. Harris COVID vaccine

Kamala Harris suggested she wouldn’t trust a coronavirus vaccine developed during the Trump administration because she doesn’t trust the president.

“I will say that I would not trust Donald Trump and it would have to be a credible source of information that talks about the efficacy and the reliability of whatever he’s talking about,” she told CNN’s Dana Bash in a video clip of the interview to be aired on Sunday’s edition of CNN’s “State of the Union.”

That’s right. If a vaccine passes all the tests for safety and efficacy, the woman who once let pedophiles off the hook to get elected, now is suggesting that people ignore a working vaccine and possibly contracting COVID to help her and Creepy Joe in the 2020 election.

When reporters are done asking Biden how his "soul" is doing, maybe they can get around to asking whether comments like these from Biden and Harris are endangering public health. https://t.co/kRie9IZXZL

When asked by Bash whether she thought that public health experts and scientists would get the last word on the efficacy of a vaccine, Harris predicted that they will not.

“If past is prologue that they will not, they’ll be muzzled, they’ll be suppressed, they will be sidelined,” Harris said. “Because he’s looking at an election coming up in less than 60 days and he’s grasping to get whatever he can to pretend he has been a leader on this issue when he is not.”

The administration has sought to counter concerns that politics will influence elements of the vaccine’s development or distribution.

“I have to say there has been absolutely no interference,” said Moncef Slaoui, the chief adviser to Operation Warp Speed. He told Science Magazine he would resign if there was undue influence. In fact, throughout this China Virus process, the only ones who claimed there was interference by Trump on the scientists or doctors were the leftist media and the far-left politicians.

Does the Biden/Harris ticket believe that Trump spends all night in a secret White House chemistry lab, mixing his own vaccine that he is going to force us to take? No, what they really think is it’s okay to convince people who would take a new vaccine to ignore it.  In other words, they believe it would be fine for more people to get COVID and possibly die as long as it serves their political needs. On the bright side, if they refuse to take the vaccine– there is more for the rest of us.

As for President Trump, who shut down the economy, knowing that it would save lives but hurt his reelection campaign, he has proven his belief that people’s lives and health come before politics.

The vaccine part of the Harris interview is on the video below: