Harris-Biden Gun Slogan: If You Like Your Guns, Sorry, You CAN’T Keep Them 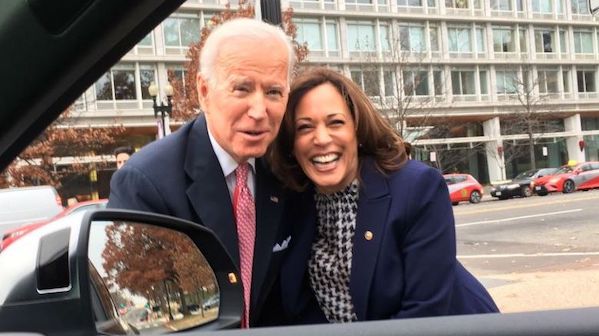 Remember that time President Obama said, “If you like you like your healthcare plan, you can keep it?” Or when President Bush (Sr.) said, “Read my lips, no new taxes!”

Turns out, both of those statements were big fat lies! Basically, you cannot trust a word most politicians say, but you can watch what they actually do and get a pretty good idea of the truth.

But who should you vote for in less than thirty days!

If you are a gun owner or value the Second Amendment, you have no choice which scumbag you must vote for. It is not even a question. You must vote for President Donald J. Trump.

Joe Biden has a record of helping create and voting for all manner of gun control (Brady Bill, 94 Assault Weapons Ban ), and his so-called gun safety manifesto is a terrifying litany of tyranny. In all honesty, there is no way old Joe will last a year if elected due to his obviously declining health. It is a fact, don’t argue it. If Biden is elected, it will be a President Harris ASAP. Her statements and promises on gun control are more extreme than Joe’s!

Harris has openly promised to force gun-owning citizens to turn in their weapons. “We have to have a buyback program, and I support a mandatory gun buyback program,” she said. “…there are 5 million [assault weapons] at least, some estimate as many as 10 million, and we’re going to have to have smart public policy that’s about taking those off the streets.”

TAKING THOSE OFF THE STREETS means they are coming for legal gun owners’ weapons. It is black and white.

Biden and Harris openly state their nefarious goals: A full assault weapons ban, (which includes most modern rifles like AR’s), outlaw high capacity magazines(anything over 10), outlaw all private sales of weapons, institute a registry of citizens who own guns, implement a forced buyback of all existing so-called assault weapons, task the FBI and ATF with confiscating weapons of all types from citizens through the use of “Red Flag” laws and “watch” individuals who fail a background check, hold parents liable for allowing access to family-owned firearms to minors, hold gun and ammo manufacturers liable for a crime committed with their products, make it illegal to buy gun parts and put together your own firearm, make it illegal to purchase gun parts or ammo on the internet, make it illegal to buy more than one gun per month, and much more!

That is quite obviously a lot of INFRINGING upon our rights! Second Amendment be damned!

Donald J. Trump is many things, but he is not going to do any of those things on that list.  Trump is currently the only thing that will keep you from becoming a criminal in the eyes of a state-run by Biden/Harris.

I recently legally purchased the parts for an AR-style weapon. My teenaged son and I put it together. Talk about a great bonding time and a memory I hope he remembers. We had a blast and then took it to the range and promptly slaughtered some paper targets having the time of our lives.

P.S., a young man who has grown up building Legos with thousands of pieces, comes in pretty handy when assembling a rifle!

Many things in that scenario would be illegal under a Harris/Biden administration. We bought gun parts over the internet and from a store. We have several 30 round magazines. My meager quantity of ammo would be considered an illegal stockpile. I allowed a minor to touch said parts and fire the weapon. It is stored in my home and most likely not to the safety standard required by Biden or Harris. It is not a smart weapon, and on and on. To Biden/Harris, I will be an outlaw.

What if my 25+ years’ wife decides one day that she can’t take it anymore and is out the door? What if she files a complaint against me in her anger? The ATF/FBI/LocalPD will be knocking on my door to take my guns. It will be just that easy with what Harris/Biden has planned.

Gun owners and freedom lovers. There is no choice for you. I’m sorry, I wish there was a choice, but there is not. You will be voting for Donald Trump unless you want the things I’ve stated to become a reality. I’m not kidding. This is scary, but it is not a scare tactic. This is their own words and promises.

We’ve witnessed our world devolve into chaos, and our cities burn while the left calls to defund the police. In an America run by Biden/Harris, the last thing you want to be is unarmed. Our founders put self-protection rights right up there at the top because they knew it was critical to the survival of our Republic.

If you like being able to privately own weapons and protect yourself and your family, ignore whatever you hate about Trump and vote for him. It is really that simple.