Dementia Joe Was Right There 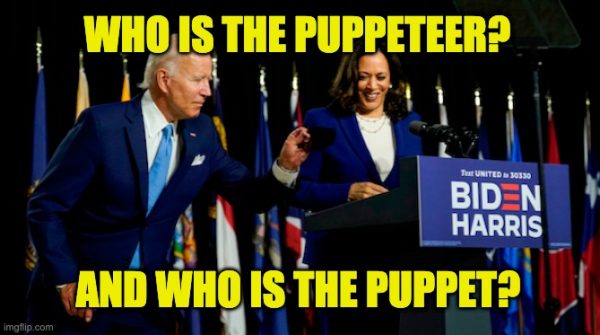 There has been much in the way of speculation that Sen. Kalama Harris was being groomed by the Democratic Party to take the big chair in the Oval Office due to Joe Biden’s seemingly decreased cognitive abilities. Harris threw a new spotlight upon that rumor on Monday. While participating in a virtual town hall event with Latino small business owners in Arizona, Democrat Vice Presidential candidate Kamala Harris touted a “Harris Administration together with Joe Biden.”

“As part of our Build Back Better agenda, we will need to make sure you have a president in the White House who actually sees you, who understands your needs, who understands the dignity of your work, and who has your back. A Harris administration together with Joe Biden as the president of the United States, the Biden-Haris administration will provide access to 100 billion dollars in low-interest loans and investments for minority-business owners.”

What?  How can there be a Harris Administration if Biden is — God forbid — the president?

Harris’ remarks come as some Democrat strategists continue to express concerns over Biden’s fitness and stamina for the presidency. Since jumping into the 2020 race, the former vice president has flummoxed many with his frequent gaffes and misstatements on the campaign trail.

The issue came to a head last week when a one-time White House stenographer, who worked exclusively with Biden during the Obama administration, told the Washington Free Beacon that the former vice president had deteriorated since leaving office.

“It is a complete difference from what he was in 2017,” the stenographer said. “He’s lost a step and he doesn’t seem to have the same mental acuity as he did four years ago.”

We’re just speculating here, but perhaps she accidentally let the cat out of the bag by letting us know who will hold the real power if Biden wins…