Hank Johnson Says Impeach Trump For Being Too Tall (Video) 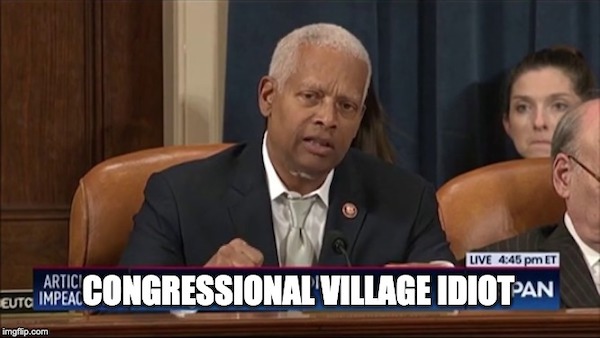 Rep. Hank Johnson (D-GA) always finds a way to bring comic relief to the House of Representatives for saying something entirely imbecilic.  We are talking about the Congressman who asked a General at a hearing if all those U.S. Marines on Guam will make the Island tip over, or that the NRA opposed Obama’s anti-gun efforts because he was black,  worried about if there was enough helium in the world for comedians to speak with high pitched voices, and asked if Ruby Ridge was in Utah (instead of Idaho) and that if a rich guy has a hole in his pocket and puts a quarter in it what will come out and fall to the floor will be nickles and dimes. Hank Johnson also called the Jews termites long before Farrakhan did.

During yesterday’s intense impeachment hearings, the Congressional village idiot seemed to suggest that President Trump be impeached because he’s taller than Ukrainian President Volodymyr Zelensky. Then he imagined a situation in which Trump might kidnap Zelensky’s daughter, and tie her up with duct tape in the basement.

“I mean, there’s an imbalance of power in that relationship. It always has been,” Johnson further said. “And there’s no way that the nation of Ukraine can stand up to the power, the power of the United States of America. And President Trump used that unequal bargaining position, he leveraged his power in that relationship, not for the benefit of the United States of America, but for his own benefit.”

Here’s a video of his insane rant as posted to Twitter:

The White House fired back with a snarky message and a picture showing Johnson’s claim to be totally false.

“JUST IN: Democrats want to impeach the President for [checks notes] being too tall,” the White House said.

Please… Don’t give them any ideas.

Perhaps Johnson was joking.  Then again, maybe he wasn’t, given his history of stupid statements.

And for fun, here is his most famous gaffe: