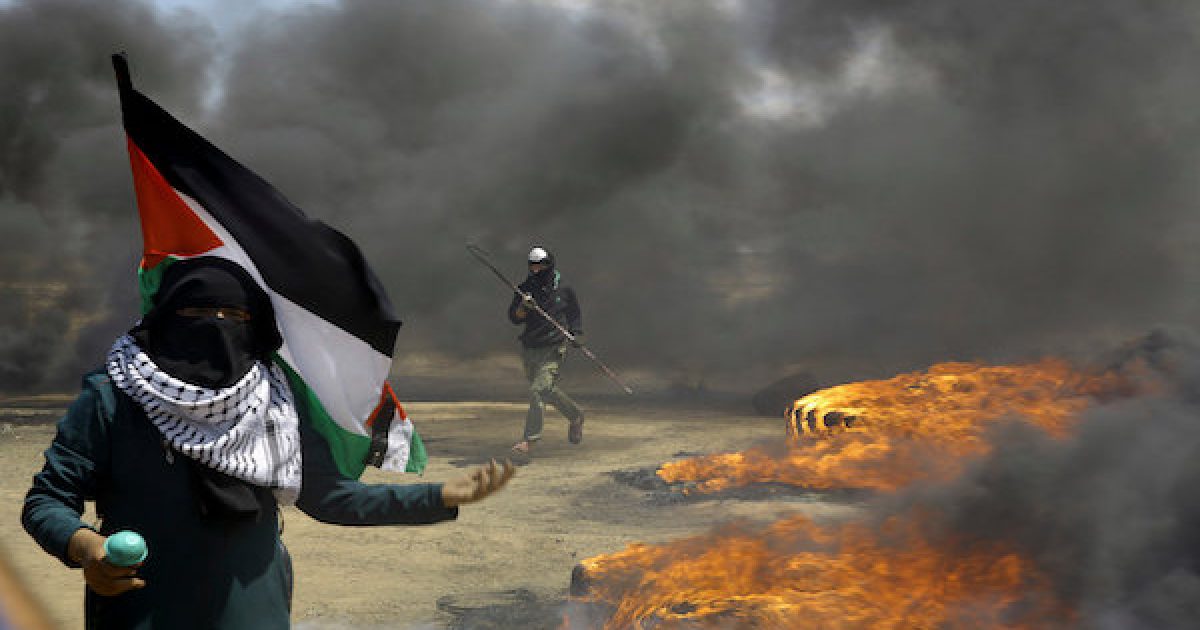 There are still those who claim that the violent Gaza protests were actually peaceful and the protesters weren’t violent. Truth be told any protester who wasn’t violent wasn’t following the instructions Hamas put up on Facebook.  The instructions posted on the page called “The Great March of Return” just after midnight on May 14, 2018, told followers to bring weapons and if they see an Israeli soldier to kill them. Hamas’ orders were not to kill civilians. Instead, protesters should kidnap the civilians so they can be held for ransom. 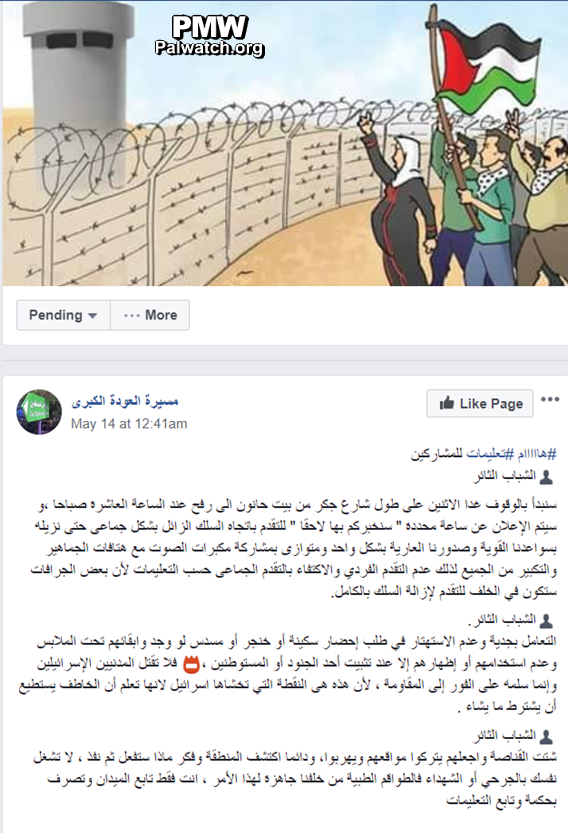 For those of you who can’t read Arabic, the folks at Palestinian Media Watch provided a translation:

“Rebelling young people, Treat seriously and do not take lightly the requests to bring a knife, dagger, or handgun, if you have one, and to leave them under your clothes and not use them or show them, except if you identify one of the [Israeli] soldiers or settlers. Do not kill Israeli civilians, instead hand them over to the resistance immediately, because this is the point that Israel fears, as it knows that the capturer can set any condition he wants.”

Gee that doesn’t seem very peaceful to me. And they were told to bring weapons.  But Hamas runs a very organized violent protest.  The Hamas directive explained how the protesters would attack the security fence en masse enabling them to breach the fence (with the help of some bulldozers):

There will be a collective advance towards the barbed wire fence until we remove it with our strong hands and exposed bodies all at once, while being aided by loudspeakers and calls of ‘Allahu Akbar’ (i.e., Allah is greatest) by the masses. Therefore, do not advance individually, make do with the collective advance according to the instructions, because there will be bulldozers at the back that will advance in order to completely remove the fence.”

But whatever they do, Hamas warns the protesters to leave their injured and dead buddies alone:

“Do not busy yourselves with the wounded or the Martyrs (Shahids), as the medical teams behind us are ready for this. Just pay attention to the battlefield and act wisely and according to the instructions.”

Besides, as Niki Haley said during the UN Security Council meeting on Tuesday Hamas was pleased with the results [all the dead and injured on TV]. Alan Dershowitz called it “the dead baby strategy.” It was a set-up. Hamas wanted a bloodbath of its own people, so they put the IDF in a situation where they had to fire to protect Israeli civilians.
Per Palwatch along with the Facebook page “The Great March of Return:”

“The same text was also posted on the independent Palestinian Facebook page “Gaza Now” on May 13, 2018, but was later removed. Likewise, it was shared in a forum thread about the March of Return protests in Gaza on the Palestinian website PALDF on May 13, 2018.”

Oh, and one more thing, at least 50 of the 62 who died on Monday were Hamas fighters  Who says so?  Hamas does:

Another terrorist group Islamic Jihad claimed three of the dead.

And the most tragic of deaths the eight-month-old little girl:

“A Gaza doctor told the Associated Press that an eight-month-old girl who died, did not die from inhaling tear gas as Gaza’s Hamas-run Health Ministry had claimed, but from a preexisting medical condition.”

It seems that the news reports as well as the criticism from diplomats either ignore or don’t care about the facts.

And as for Facebook, it seems that they only censor political posts from American conservatives—they have no problem with instructions for violent acts posted by terrorists.