Dem. Rep. Haley Stevens Gets Frothing From The Mouth Crazy On House Floor 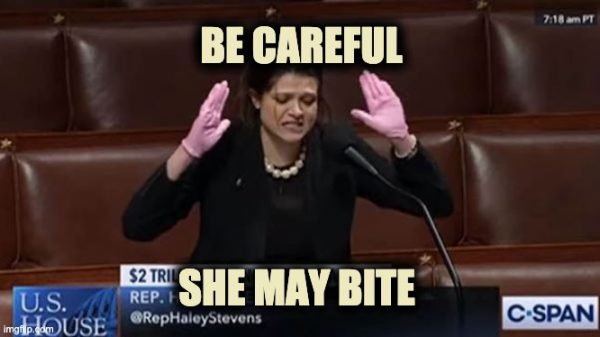 Democratic Rep. Haley Stevens went completely stark raving crazy while giving a speech after returning to vote on the Wuhan virus relief package. What she’s actually saying or ranting about is up for interpretation, but the level of craziness on display is not.

Look at the video:

My former MRC colleague Brittany Hughes got it started.

Funny! She’s wearing gloves while her screaming spit is showering down on the lectern.?

Is that spit, or is she frothing from the mouth?

I do not blame this idiotic Representative, but the fools who voted for her. ‘YOU WILL SEE DARKNESS!’: Democratic Rep. Haley Stevens Loses It As House Floor Descends Into Chaos https://t.co/jOedHEfPIB via @dailycaller

@HaleyLive you lady need to be locked up and medicated. You are a disgrace to the country and government.

It’s scary to see that there are people like this in the House of Representatives. Scarier to think there are more just like her in there.

OMG. The mentally ill have taken over Congress.

True, but enough about Alexandria Ocasio-Cortez.

This is yet another example of the unhinged left on full display. She needs to go home and get back in bed. Her behavior is inexcusable and beyond the pale. She may need some professional help with deep rooted problems from her past. Just observing her rant.

This is every liberal ever, regarding any topic — incoherent screaming

WOW I think she has lost it.

MMM..she’s extra angry and frothing from the mouth.  According to Google, she’s exhibiting the symptoms

I hope these mentally unstable, self-seeking, indulgent idiots in congress get thrown out.

The stenographer just kept typing. Wonder what the steno code for “incoherent raving” is? #spicy

I don’t know.  What about wack job?