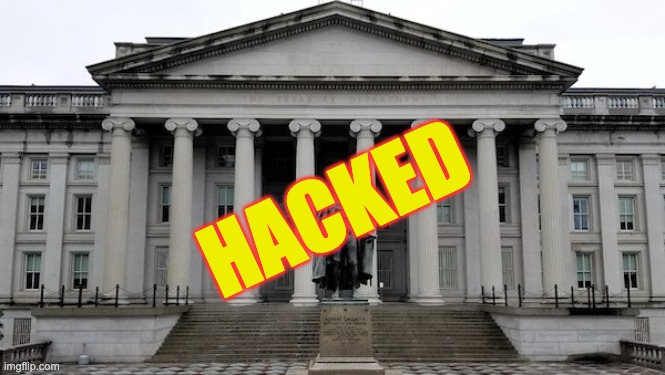 We were the first nation to stand up to the old ways, with kings and serfs and the schemes of class-slavery.  We told the Redcoats to take a hike on account of a tea tax, handed the keys to the kingdom to ourselves, and we’ve been the envy of the world ever since.

In nations like Russia, China, and Iran, where leaders are still subverting their subjects to this day, the American dream is the streetlight shining into their bedrooms and keeping them awake at night.  It’s a beacon to their citizens that it doesn’t have to be this way and a warning sign to those leaders who would refuse to give up their absolute power.

And so these bad actors will do whatever it takes to end American freedom because our success is bad for business back at home.

Hackers backed by a foreign government have been monitoring internal email traffic at the U.S. Treasury Department and an agency that decides internet and telecommunications policy, according to people familiar with the matter.

“The United States government is aware of these reports and we are taking all necessary steps to identify and remedy any possible issues related to this situation,” said National Security Council spokesman John Ullyot.

There is concern within the U.S. intelligence community that the hackers who targeted the Treasury Department and the Commerce Department’s National Telecommunications and Information Administration used a similar tool to break into other government agencies, according to three people briefed on the matter. The people did not say which other agencies.

Just how bad was it?

The hack is so serious it led to a National Security Council meeting at the White House on Saturday, said one of the people familiar with the matter.

The hack involves the NTIA’s office software, Microsoft’s Office 365. Staff emails at the agency were monitored by the hackers for months, sources said.

Both China and Russia have been heavily involved in hacking and cybersecurity attacks against the United States in 2020, seeking to capitalize on the turmoil of this extraordinary year.